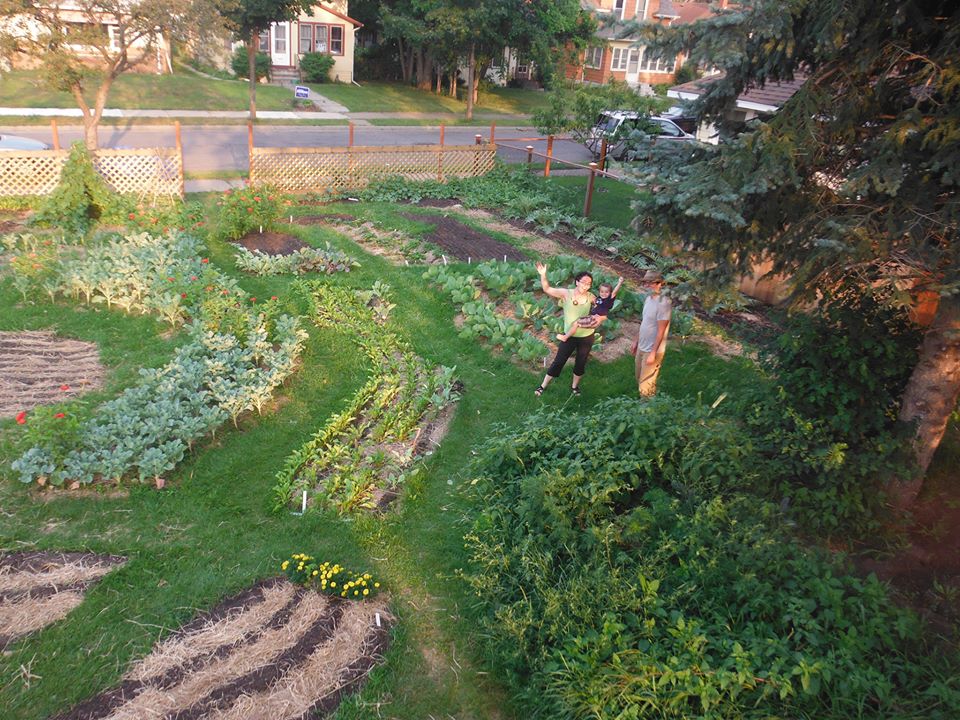 The Standish and Ericsson neighborhoods have many assets: lakes, parks, restaurants, shops, light rail, a farm. Wait a minute! A farm? In the city? You betcha. It’s called Jack Dog Farms, and it’s located on the southwest corner of Standish Ave. and E. 38th St.

In just one year, Corrine and Justin have transformed a vacant, unproductive lot on a busy street into a welcoming green space for fruits, veggies, herbs, and flowers. A visitor to their urban farm will see neat plots of dirt separated by grass. Each plot contains a different crop—familiar ones like tomatoes, eggplant, potatoes, and onions, and some not so familiar like arugula, kale, chard, and bok choi. A nearby fire hydrant provides water.

Corrine and Justin, who live in the Powderhorn Neighborhood, applaud all efforts to raise food locally, including backyard and boulevard gardens and community gardens. While Jack Dog Farms may look like a community garden, there are differences. Community gardeners raise their fruits and vegetables for the enjoyment of themselves, their families, and their friends. Jack Dog Farms, on the other hand, is a business. The farm needs a large yield in order to feed many people and turn a profit.

Except for a few work-trade helpers, Corrine and Justin do all the planting, weeding, and harvesting. The partners also have a farm site in Prior Lake.

Jack Dog Farms uses the community-supported-agriculture (CSA) model for generating income. Subscribers pay ahead for a share of the produce throughout the growing season. (See the sidebar.) Corrine and Justin also sell their produce at a weekly market stand on 38th St. on Wednesday evenings. As their business grows, they hope to sell produce wholesale to local restaurants.

For Corrine and Justin, Jack Dog Farms is the fulfillment of a dream. They spent several years researching and figuring out how to have an urban farm that would meet the goals of sustainability and self-sufficiency in agriculture. Both Corrine and Justin received training through the Land Stewardship Project’s Farm Beginnings program and the Permaculture Research Institute’s Urban Farming Certificate program.

Corrine and Justin are excited to bring fresh, healthy, locally grown fruits and vegetables to the Standish and Ericsson neighborhoods. They hope to teach people, especially children, more about growing, preserving, and preparing food. They have already held workshops on lacto-fermentation and solar dehydration, which are processes to maximize the nutrition in food. Corrine and Justin envision Jack Dog Farms becoming a community gathering place and plan to host events such as a harvest party with a bonfire and homemade apple cider.

You’re welcome to stop by Jack Dog Farms for a visit or you can learn more about the farm at www.jackdogfarms.com or on Facebook. The market stand is open Wednesdays from 4:00 to 7:00 p.m.