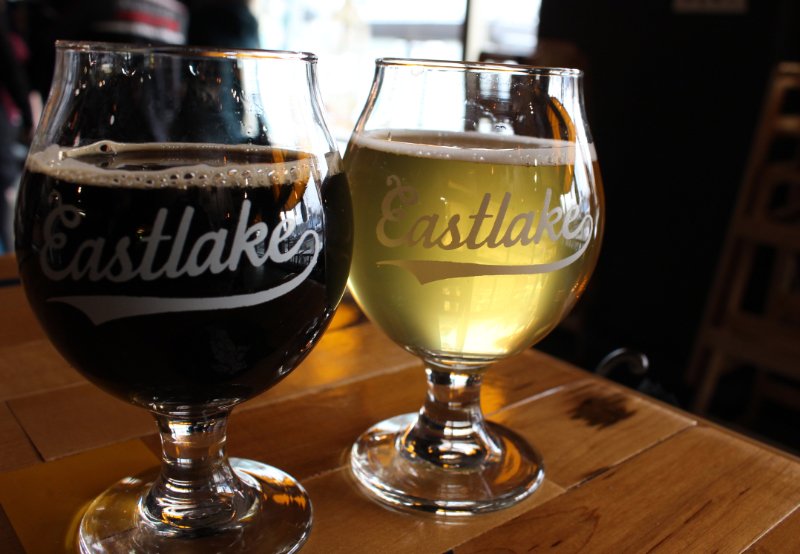 Continuing the sordid tale of my recent mass brewery tour we move from LynLake Brewing at the edge of Uptown to Eastlake Brewery, further down Lake Street in the Midtown Global Market.  Just past Chicago Avenue, this area borders a bit on “hood”, being the only place (after living in Chicago for 4 years) that I was ever almost mugged.  That was quite a while ago but I hold a grudge.  My favorite independent bookstore Uncle Hugo’s/Uncle Edgar’s is right there as well.

The Midtown Global Market is an interesting place.  Located in the long abandoned Sears Building right on East Lake Street, the market opened in 2006 as a place for small business owners of varying ethnicity to open businesses.  An indoor bazaar of crafts and items from Africa, South America, Scandinavia and more, the building also houses many small authentic eateries and ethnic markets.  Located in an area with a fair mix of cultures, this is a fantastic place for a hot-dish jaded Minnesotan to try something unique.  The Market is also walkable from Abbot Northwestern Hospital and is a popular spot for visitors who have family and friends staying in the hospital.  There is a parking ramp right next to the building with parking validated with purchase within the market for easy access.  My only caveat to encouraging people to visit is that after using my credit card there once someone tried to buy an expensive set of tires in Mexico with it…It was just one experience, but I make sure to use cash there now!

With the embarrassment of edible riches around, a brewery tap room located right in the Market is a recipe for success.  The Eastlake taproom is fairly small but comfortable and open, seating 75 people at maximum capacity.  The 7 barrel electric brewery itself is equally tiny, visible through a door abutting the taproom.  I want one of those for my homebrewing! Long and narrow tables made of what looks like reclaimed bowling alley wood provide most of the seating.  The bar itself is lined with rustic wood and has wooden signs with the available beers easily visible above it.  They were doing a bustling business while we visited, and the servers were moving fast to keep up.  They carry a selection root beer, ginger ale, and kombucha available for the non-beer drinkers at the taproom, as well as a couple of snacks for the thirsty.  Unusual wall art, a few taxidermy animal busts, and an air-hockey table complete the very eclectic decor.

The owner and brewer is Ryan Pitman, who was kind enough to answer a couple of questions for me for this write-up.  Like many professional brewers, Pitman started as a homebrewer, frequenting the local homebrew shops and teaching himself the craft.  From what I hear, he was quite the industrious and enthusiastic homebrewer, really leaping into the hobby and brewing a lot of beers in a short time.  I’m always happy to see one of my homebrewing brethren take it to the next level and be able to share their brews with a larger audience.

The beers themselves are served in either 10 oz snifters or 16 oz pint glasses.  Between the three of us we were able to try three of the five beers on tap, but I would have liked a sampler so I could taste them all.  I know samplers are a pain to serve and cleaning those little glasses is time consuming, but I hate to miss tasting some of the beers.  What if the one I let slip by was the best one?  Gotta drink ’em all!  Our overall favorite was the oddly named L’Ogre De Turvueren a light Belgian pale ale.  The brewer did a good job of balancing the Belgian esters with a strong but not overwhelming hop bitterness that reminded me of some hoppier beers we tried in Belgium recently.  Our second favorite was the El Armatoste,  a brown ale with light coffee and cinnamon spicing.  Not a bad job for a spiced beer, as so many of those take it too far for enjoyment of the base beer.  The Slop City stout was our least favorite of the three, coming out a bit too astringent and ending very bitter.  Best name of the three though!

The brewery has been open just over a month, and seems to be quite popular already based on our visit.  I always hesitate to pass judgement on a brewery in the first few months, knowing that they have a lot of potential kinks to straighten out with the brewing process, fermentation control, water chemistry, and even logistics of serving the beers.  Overall these were good quality beers, and I look forward to seeing how things evolve in the coming months.  Ryan has plans to open a sidewalk seating area come spring and also hopes to host some special events now that the space is open.  I enjoyed our visit to the Eastlake taproom and will certainly go back the next time I go on a book buying spree at Uncle Hugo’s!

Come check out the blog for more beer related and photography posts from the Twin Cities at http://jackofallbrews.blogspot.com