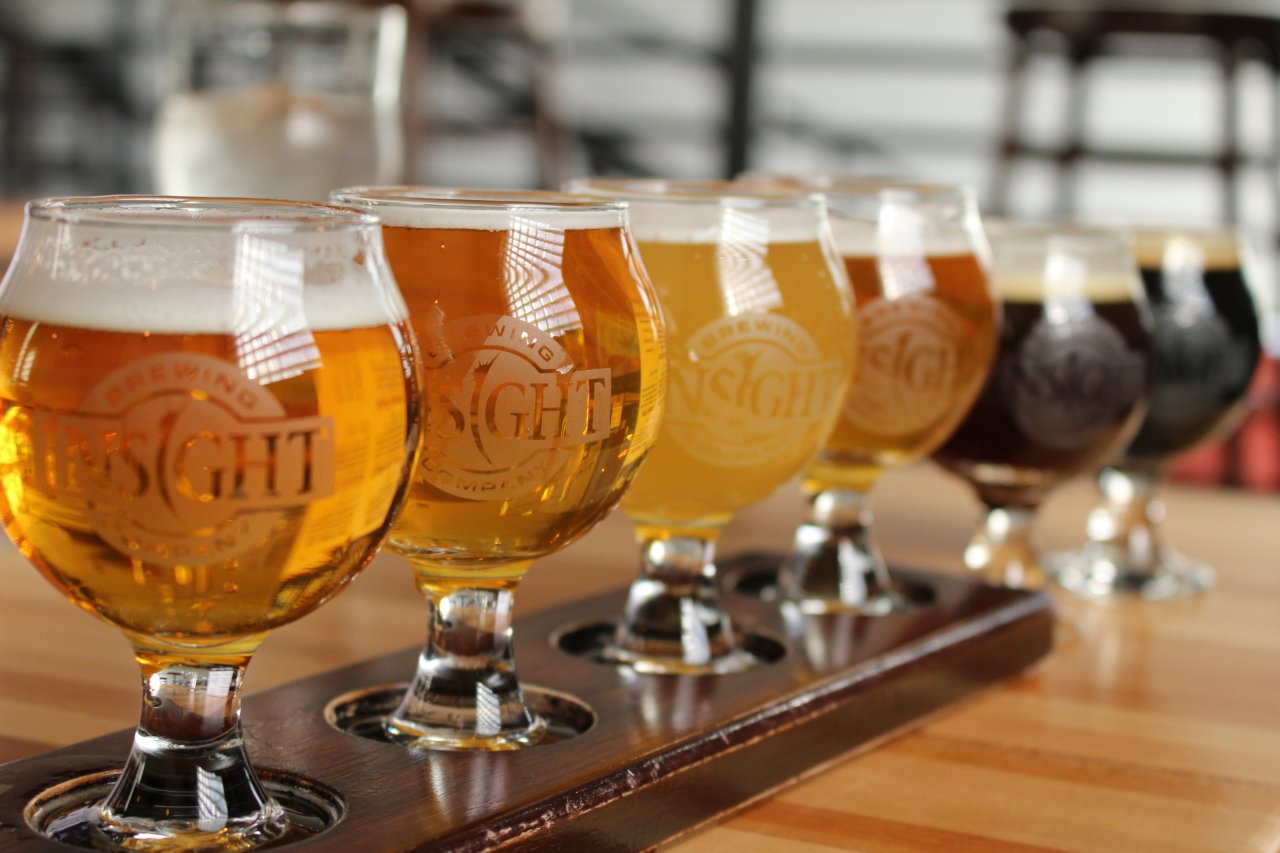 I actually got a chance to visit Insight Brewing a little over a month ago for the first summit of Minnesota beer journalists (organized by the wonderful Paige of Alcohol By Volume) and enjoyed my visit at that time.  Since I was there on a Sunday evening, and busy socializing, I didn’t really get a chance to take good pictures or have the time to really focus on reviewing the beers.  So I ended up making a separate trip out there on a Sunday afternoon with my wife, Sj, for a more “official” review.   I give them extra credit that they are one of the few taprooms to be open all week long, giving a far-west suburb guy like me options to come visit at more convenient (less traffic) times like Tuesdays or Sundays.  Get on board other Minnesota taprooms–we beer geeks like to drink on days other than Friday and Saturday!

The brewery opened in the late Fall/early Winter of 2014.  Founder Ilan Klages-Mundt became enamored with beer and breweries after tasting a Westvleteren 12 while in Denmark.  (You can read my official review of that great beer HERE.)  Thereafter he traveled extensively and worked at breweries in England, Denmark, and Japan.  Returning to Minneapolis, he found some partners willing to take a chance on opening a brewery.

Garnering a few odd looks (more than I usually do anyway) as I wandered around outside and in snapping pictures, I explored the extensive environs of the brewery.  Located in what looks like an old brick warehouse in Nordeast Minneapolis, the brewery actually has a good sized parking lot–a rarity these days.  The building itself is quite large (20,000 square feet!), with what looks like plenty of room to grow for brewing capacity.  This is one of the largest new breweries we have seen in the state, so these guys are not messing around.  It also explains why they have been able to reach so many markets across the Twin Cities in such a short time period.

The taproom entrance is right off the parking lot and as you enter the building you see the side of the large wooden bar to your left.  The place is big.  Really big.  3000 square feet big!  High ceilings, widely spaced seating, and plenty of floor space give this taproom a very different feel from many of the tighter and more claustrophobic Northeast taprooms.  Seating ranges from tall booths, to high and low top tables, to some couches and low tables in the back corner, giving lots of different options yet without seeming slapped-together.  With the size of the place, each of these areas almost seems like a different room or area.  Open duct work on the ceiling and interesting industrial light fixtures and table legs enhance the reclaimed warehouse feel of the place.  Photographs and paintings by local artists line a few of the walls, adding a bit of softness to the hard mechanical feel.  One can see the brewery equipment itself behind some large glass windows off to the right of the bar.

While we were there, larger groups shared stories and pints at the high-tops.  Smaller groups and twosomes came and went.  One pleasant group of guys were working at playing the epically difficult Arkham Horror board game while sipping on beers from the bar.  One nice couple noticed me taking pictures and struck up a conversation with us, offering good advice on what other breweries we should visit in the area.  I will get to Bauhaus eventually, I swear it!  Overall, everyone here was relaxed and having a good time hanging out–just what I expect at a good taproom.

While they don’t serve food, both times I have been there they had a local food truck present.  They also have many special events at the taproom like firkins and special infusions of their beers to make it worth stopping in frequently.

Ok, so I really like the taproom itself.  What about the beer?  Sj and I split a sampler so we could try everything.  One can also order full pints and smaller 8 oz glasses as well, giving options for what kind of thirst you have.  I slowly worked my way through the sampler, taking some notes in my Untappd check-ins so I could revisit them later.

Lamb & Flag: A nice sessionable English bitter.  I’m pleased with the low ABV on this, as I could drink a couple of pints over time and still walk afterward.  However, there is a bit of an astringency to the finish that knocks off a few points for me.  Sj thought it was too bitter for her.  Smooth it out a bit and this would be stellar.

Chiswick Porter: This is an English style porter, and based on the first taste I had during my previous visit, I would have put this as the best I’ve tried in Minnesota.  However, this second tasting was different–very murky appearance and a strong yeasty bite to it.  I think this one was perhaps rushed from the fermenter before it had settled out.  Still pleasantly roasty in flavor and aroma, but muddled compared to the precious time.

Yuzu Pale Ale: This is an interesting take on the classic and often uninspired pale ale.  By using Yuzu, a Japanese citrus fruit that combines characters of lemon and lime, they have accentuated the citrus character of the hops without going too far astray from the base beer style.  I really enjoyed this and actually went back for a small glass of it when I was done with my taster.

Saison De Blanc: A take on the Belgian farmhouse style of beer.  There is certainly a lot of Belgian yeast character in this one, perhaps too much.  While the style doesn’t preclude some haze, this one like the porter was very cloudy and had too much yeast flavor for my tastes.  As a homebrewer I’m used to a little extra yeast in my bottled beers, but as served this one might put some people off.  Not bad, but just not quite right.  I believe this beer also includes some white grape must-but I didn’t really taste much of that over the yeastiness.  Also had a bit more harsh finish than expected.  I’m currently working on a blog entry about grape/beer hybrids and would like to try this again and add it to my write-up.

Gravity Well: A bold beer for a young brewery to put out, but appreciated!  This is a strong Russian Imperial stout aged in Cognac barrels.  It doesn’t taste as boozy or as thick as I would have expected for its 11% ABV, but this makes it fairly easy to drink.  A very pleasant RIS that I would go back for.

Overall, I feel that Insight Brewing really does stand out from being just another brewery in NE MPLS.  From a large and comfortable tap room, to an unusual grouping of beer styles featuring ingredients from varied countries and cultures, they fill a different niche.  Both times I’ve been here have been fun experiences that make me want to come back.  With more open hours than most local taprooms, they also give more options for when to visit.  The beers were all decent (the lowest score I gave was a 3), but many had a house flavor of sorts–a bit of astringent finish, that while not extreme, was enough to cut my final scoring on most of them.  I’m wondering if this is due to water, since they are obviously using multiple yeasts in their line-up of beers.  For only being open a few months, I think these guys are already making a good name for themselves and are poised to grow very quickly.  The only advice I would offer would be to make sure the beer quality doesn’t suffer from rushing them out to market too quickly.  I have seen several other breweries fall into that trap over the past few years, local and even nationally.

If you haven’t checked them out yet, I would make the effort!