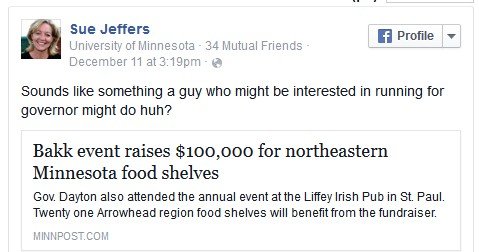 A Brief History of the Fundraiser

Bakk, who has sponsored the fundraiser for eight years, first announced in 2008 that he was seeking the 2010 DFL endorsement for governor. He withdrew from the contest in March 2010. Since the fundraiser began before his ambitions flowered and has continued since he pruned them back, one suspects that Jeffers is simply reaching for an evergreen criticism of the Majority Leader.

Moreover, we must pause at the spectacle of a conservative libertarian objecting to a private charity raising money to feed the hungry at a part of Minnesota that Republicans do often tell us lags behind the rest of the stay. And with Christmas coming on, Jeffers’ observation seems a big baa humbug.

While Governor Dayton attended this year’s festivities, we find that the annual event doesn’t seem overly partisan. Take a November 29, 2013 item in last year’s In the Know circulated by the state DFL:

Just a couple months ago, Leslie Rosedahl served as Senate GOP communications chief under state Senate Minority Leader David Hann, R-Eden Prairie. On Tuesday, she was down in the Capitol press offices promoting a cause for Senate Majority Leader Tom Bakk, a Democrat. Rosedahl now works as director of communication and grassroots advocacy for Lockridge Grindal Nauen. Part of her new job is to promote the annual Stock the Shelves food drive. Last year, Bakk’s event raised $110,000 for the Arrowhead Region Food Shelf. This year’s event is Thursday, Dec. 19, at the Liffey in St. Paul. There is a 3:30 p.m. private event for sponsors and a happy hour from 4 p.m. to 6 p.m. The suggested donation is $25. Democrats and Republicans are welcome.Star Tribune

Is the fundraiser about “shaking down donors”?

That being said, frequent letter-to-the-editor writer David Anderson of Lonsdale comments under the Jeffers post that perhaps it’s not about a gubernatorial race:

but then owns that:

David Anderson At least its for a good cause

Anything to the former statement? Minnpost’s Joe Kimball had mentioned that “Many corporate sponsors helped present the event” but didn’t name them. Fortunately, Hunger Solutions shares them in its own press release:

Some of the sponsors in the list are players at the capitol with a clear agenda, while others–such as the Minnesota Grocers Association and Blue Cross and Blue Shield of Minnesota–are both policy and food security players. Others–like the Minnesota Nurses Association, Minnesota Power, Twin Metals, Enbridge, Molpus Timberlands Management–also represent or employ many Arrowhead residents.

One can certainly understand their civic-minded engagement with this non-profit and this particular effort, which will help fund food shelves across the area. As one Jeffers friend comments, “Sometimes, people just do the right thing.”

Here’s the post and the entire set of comments; Dorothy Fleming is a well-known Republican activist, while Gretchen Hoffman is a former Republican State Senator who sought but did not receive the GOP endorsement for MN07 in 2012: 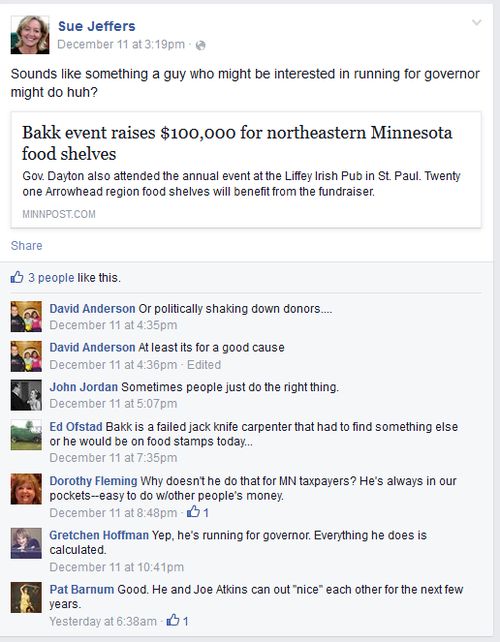 And Hunger Solutions itself does have its own legislative agenda, much of which Bluestem Prairie heartily agrees. Here’s a summary of the 2014 agenda for Minnesota Partners to End Hunger, from Hunger Solutions website:

5% Campaign: The Partnership to End Hunger supports The 5% Campaign, a nonpartisan coalition of Minnesotans working to ask state legislators for a 5% rate increase for Home and Community Based Services (HCBS) in 2014.

Many of these admirable goals–like raising the minimum wage, creating farm-to-food-shelf programs and the 5% raise to care-providers–were accomplished last spring.

Missing from the list? The payday loan reforms, and here where the story gets a bit more sketchy.

This is one of those baffling issues. Why is it so difficult to put tougher restrictions on an industry that seems to have a strong odor? Why does Minnesota continue to protect business practices numerous states outlawed and the Department of Defense condemned? Why has this issue become partisan, with virtually no Republicans supporting clamping down on the industry?

Or is it really that partisan, when you look at campaign contributions? . . .

Let’s take time out to deal with a rumor that floats around the Minnesota payday loan issue:

Brad Rixmann is founder and CEO of Pawn America, which owns Payday America. Rixmann also is a major player in Republican Party politics. He is a big donor. He was an honorary chairman of Tom Emmer’s gubernatorial campaign. . . .

But Republicans don’t control the Legislature — Democrats do. They could pass any bill on their own. Why don’t they?

Well, as long as we’re talking Rixmann donations, know this:

While the funds obviously didn’t buy Dayton’s or the House’s support, Senators might have some explaining to do about their fifth-largest 2013 individual contributor. Rixmann also gave the Senate DFL an additional $24,750 between 2006 and 2012, according to the CFPDB.

Understand, Rixmann was more generous with Republican causes. Still, his name is known — if not mentioned in caucus sessions — among DFLers as well as Republicans.

In Inside job? Payday lending reform spiked, Politics in Minnesota’s Mike Mosedale reported that although both houses passed the bill, they were significantly different enough that the House would have to substitute and vote on the last-minute Senate bill. No vote was scheduled before the legislature adjourned.

The CEO of Payday America, the state’s largest payday lender, Rixmann has also emerged in recent years as one of the most active big money donors on the Minnesota political scene. While both parties have benefited from his largesse, the bulk of Rixmann’s contributions have gone to Republican candidates and causes. He currently serves on the campaign finance committee for GOP gubernatorial candidate Rep. Kurt Zellers, R-Maple Grove.

To Minnesotans for Fair Lending, the coalition of religious groups and non-profits that pushed all session for the legislation, the failure of the House to take up the bill came as a surprise.

“We didn’t make it over the finish line,” said Brian Rusche, the lobbyist for the Joint Religious Legislative Coalition. “We were disappointed we couldn’t get some small reforms. But we did succeed in explaining the debt trap to the public, and [the] predatory nature of the industry.”

Since the Grow and Mosedale stories were published, Rixmann gave $15,000 to the HRCC (House Republican Campaign Committee), $4500 to the GOP Senate Victory Fund, and $2500 to the DFL Senate Caucus. (All links open to the reports pages for the committees; figures are taken from the pre-general reports. The interface for searching individual contributions to committees isn’t working as we write this, so we only looked at legsislative caucus and state party reports).

Payday America was also a sponsor of the fundraiser in 2013.

To paraphrase a lovely Christmas song by Jackson Browne and the Chieftains, it’s certainly a good thing to give a little to the poor when the spirit moves us, but more risky to interfere in the business of why there are poor.

Sometimes Hunger Solutions does just that. It was part of a coalition whose 2014 agenda included raising the minimum wage. That was accomplished, however much Senator Bakk’s caucus had to be dragged and whipped to agreeing to the shape of the final conference committee report. The grocers association objected to raising the minimum wage, and yet the organization continues to give, to its credit. We don’t see a quid-pro-quo relationship between the non-profit’s public policy agenda and the contributions.

On the other hand, your mileage may vary on the merit of a politician soliciting the dollars of the payday loan industry to fund food shelves.

Photo: Canned goods at a Minnesota food shelf. Bluestem encourages all of our readers to donate to a local food shelf; those in Greater Minnesota can especially use cash that can be used to purchase food at greatly reduced prices at regional food banks.