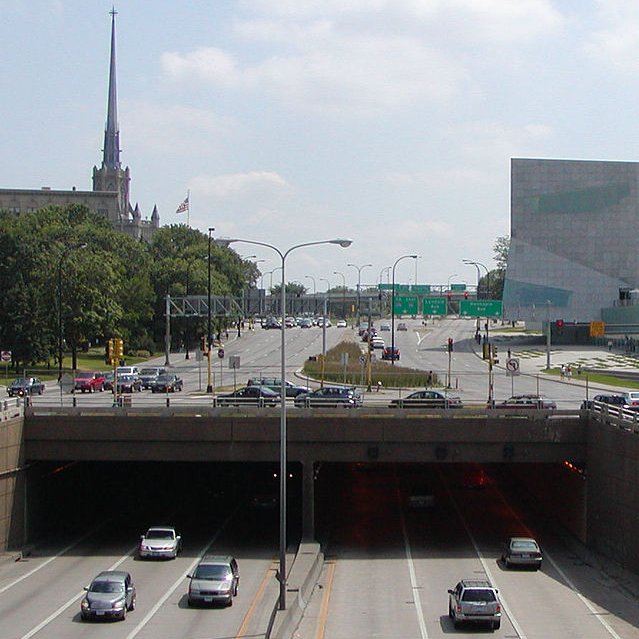 Around these parts, it’s not an unpopular belief that the Hennepin-Lyndale Bottleneck is a bit – ah, how to put it? – oversized. The City of Minneapolis’ Public Works Department does not appear to share this belief, as they’ve submitted a design for the Bottleneck that retains its massivity. When a loved one has a weight problem and he or she doesn’t want to admit it, Dr. Oz might recommend using the neutrality of facts to make a case. So can we use numbers to determine whether there are too many lanes in the Bottleneck?

I ran the numbers; click to jump to the results or read on for a detailed explanation of how I got them.

When it comes to numbers, few are more well-regarded at the moment than wunderkind Nate Silver, so I’ve copped the methodology used on recently on his 538 website to explore whether bike lanes cause congestion. Authors Gretchen Johnson and Aaron Johnson used MnDot traffic estimates as a base, then assumed based on an FHWA manual that 10% of their daily estimates used the roadway in a typical peak hour. Finally they assumed that lanes can handle 1,000 cars per hour based on info they claim to have gotten from the Transportation Research Board’s Highway Capacity Manual, which we can’t verify without paying despite the taxpayer funding that went into this product.

The 1,000 cars per hour rate is probably too low because it likely is based on the capacity of roadways meant for much higher speeds than the 30mph-posted Bottleneck. Since cars need more space to move faster, the lane capacity of lower-speed roadways would logically be higher. In fact, there is research that suggests that the lane capacity of urban street lanes is more like 1,600 cars per hour, and this signal timing course from the University of Idaho suggests using 1,900 cars per hour as a base number and adjusting downward to account for squeezes like high turn volumes, lots of trucks or buses, or lots of pedestrians or bikes.

We know that there are a lot of things that squeeze the capacity of the bottleneck, but it’s beyond the scope of this post to thoroughly study these factors (that’s Ole Mersinger’s job). So I split the difference between the figure from 538 and the base rate from the University of Idaho, and assumed that each lane in the Bottleneck can handle a maximum of 1,450 cars per hour. I bumped that number up against traffic counts from the City and did all the 538 mathy stuff to figure out what percent of that maximum theoretical capacity is being used in the different segments of the Bottleneck, and how much would be used if those segments were reduced by one lane. Here’s what I found:

First, here is the capacity of the existing facility: 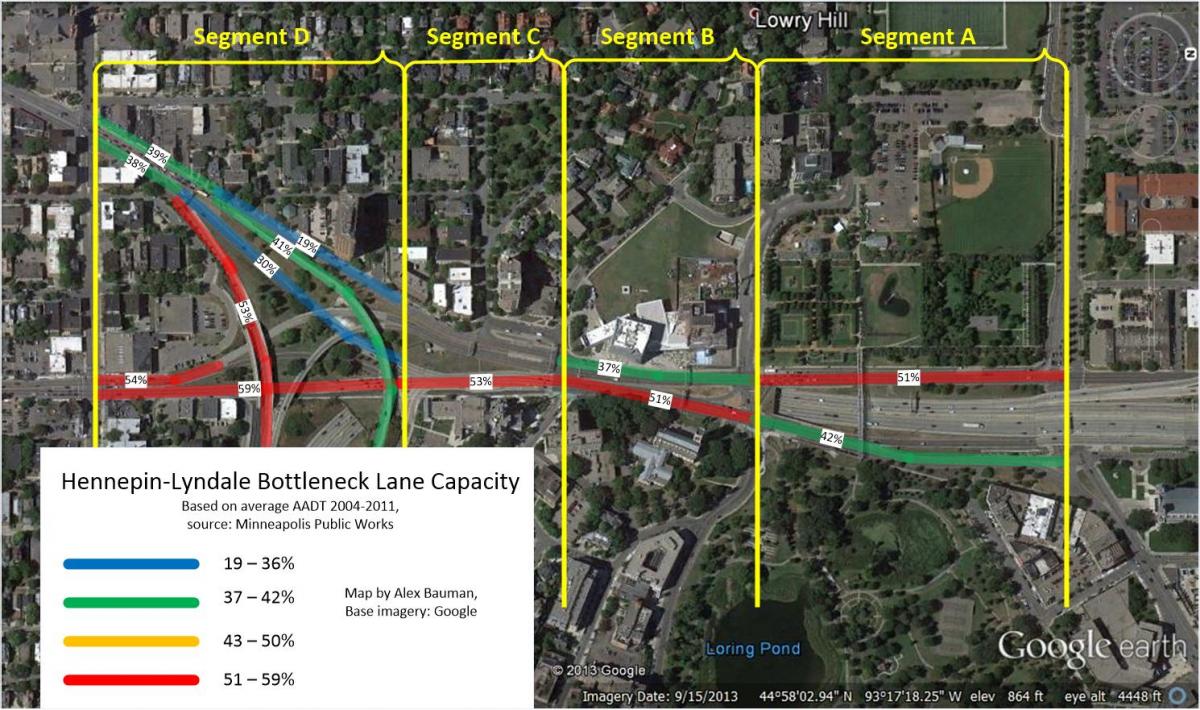 Now the capacity if a lane were removed from the segments that currently have multiple lanes: 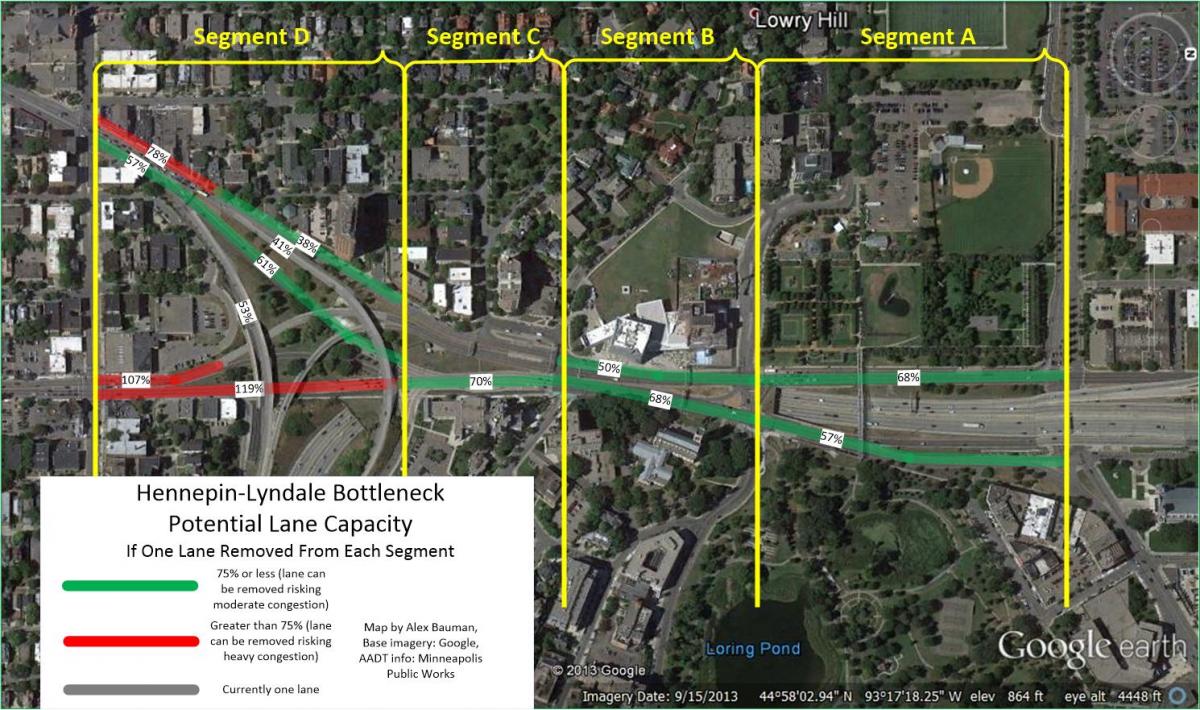 Here’s a summary table, with the segments that could handle a lane reduction without risking more than moderate congestion highlighted in yellow:

So it seems that the majority of the Bottleneck and almost all of what is currently under consideration for reconstruction could be reduced by at least one lane without exceeding capacity. This may not seem to match your experience, since traveling through the Bottleneck feels like battling a hydra with red lights for eyes and tailpipes for necks. But if you pay attention to the clock, you’ll typically find that it takes less time to travel through the three-quarters mile of Bottleneck (from Dunwoody to Franklin) than it does to travel a comparable distance in Uptown or Whittier along Hennepin, Lyndale, or Nicollet. The Bottleneck is an urban street; why should there be an expectation that it be any faster than any other urban street?

Rumor has it that suburban political interests will not allow for the Bottleneck to be rebuilt with fewer lanes than are there right now. Meanwhile a grassroots coalition has called for the prioritization of the long-neglected aesthetics of the space, and for bike, pedestrian, and transit transportation to come before personal car and truck traffic. A revised design for the reconstruction will be released at a public meeting on August 4th, show up and see which side won out.

At top: Do we really need more lanes above than below? (Image: Wikimedia)