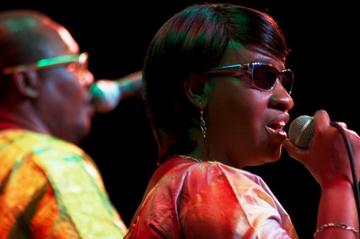 Amadou & Mariam perform at the Cedar in 2012. Photo by Jon Behm for Reviler.

The series begins on June 11 with Bombino, a Tuareg guitarist whose new album Nomad was produced by Dan Auerbach of the Black Keys.

On June 15, the Cedar will host M.anifest, the Ghanaian rapper who has been a part of the Twin Cities community since coming to attend Macalester college in 2001.

The series continues on June 28 with the remarkable Amadou & Mariam, a couple who met as members of the orchestra at Mali’s Institute for the Young Blind. They married in 1980 and have been making beautiful music together ever since—though they never made it to Minnesota until 2012, when a sold-out crowd welcomed them to the Cedar.

Another guitar wizard plays the Cedar on July 9. Vieux Farka Touré, of Mali, is often called “the Hendrix of the Sahara.”

The series concludes on July 10 with Fendika, a troupe of musicians and dancers representing Ethiopia’s azmari tradition of poetic song.