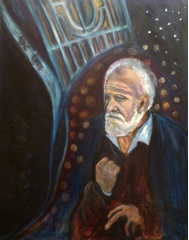 Storytelling has a long tradition in Judaism. After all, we are “People of the Book,” and each week we examine stories from the Torah, looking for their meaning.

The Hasidic tradition has story as a central element. They praise it as a mitzvah. According to Hasidic teaching, storytelling is a holy activity equal to Torah study or prayer.

And we have our Yiddish storytellers, Sholem Aleichem, Isaac Bashevis Singer…

Through my artwork, three series of which currently hang at the Bet Shalom Gallery, I try to continue this tradition by embedding story within the pieces I create. I look at the way in which Eastern European countries are rewriting the history of the Holocaust. In Vilnius, Lithuania, I participated in a cultural program led by two women in their 80s, both survivors. As they took us to the killing fields and through the streets of the former ghetto, they told their story and the stories of the former Jewish community. Juxtaposed with this experience was a visit to the Vilnius Museum of Genocide Victims. This museum is housed in a city that was 45% Jewish before WWII; 95% of those Jews were murdered. Nowhere in the museum was there a mention of the Holocaust; instead the focus was solely on the Soviet occupation. I realized that the stories of survivors will soon be lost in the face of this rewriting of history, a silence if not an outright denial. My response was to address it through my artwork in a series entitled The Silence Speaks Loudly.

A second body of work is titled A Hole in Time. This series focuses on the former Jewish community of Radom, Poland, the town from which my grandfather emigrated, leaving behind a large extended family that perished at Treblinka. My focus was on learning about the community in which my family lived prior to the war. My effort was aided by a homemade 1937 film of the Jewish community that I used as source material. The film itself was a “happy-sad” film. People wave at the camera and hold their children up, yet the all-knowing viewer looks at it with the knowledge that just five years later most of those people would perish in the camps. This series is in the style of a pinhole camera and includes small paintings that serve as snapshots that capture the community in all its diversity. 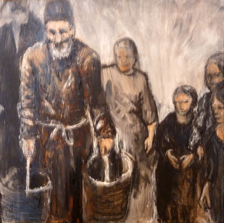 As I was developing this work, I was introduced to a local woman, Dora Eiger Zaidenweber. Dora was fifteen years old in Radom when the war broke out. She was in the Radom labor camp and later was transported to Auschwitz and Bergen-Belsen. One day Dora asked me if I would like to see her photo albums, and much to my amazement she shared pictures from before the war and during the time of the ghetto. When I inquired as to how she had these photos she told me that her brother and husband each had the same idea. When they left their home in the ghetto to be deported, they took photographs. In transit they hid them in their shoes. They survived Dachau and the photos accompanied them to their later move to Minneapolis. In April 2011, I had the opportunity to travel with Dora to exhibit my work in Radom. We included Dora’s photographs, some of which are also included in the Bet Shalom exhibition. I had the opportunity to explore my family’s ancestral town with Dora as my guide, sharing her memories of the Jewish community from which my family came. 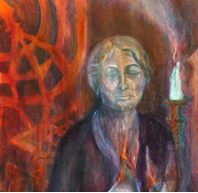 The final series is derived from an oral history project of a series of interviews with elders at Sholom Home. Entitled the Jewish Identity and Legacy Project, it spanned Holocaust survivors, Jewish immigrants from Russia, and elders who grew up in early immigrant communities in Minnesota. Most interviewees were in their 90s and their memories took us back to stories of pogroms, immigration and early Jewish communities. This collaboration with Sholom Home and the Jewish Historical Society of the Upper Midwest received support from the State of MN from the Arts and Cultural Heritage Funds (through the Minnesota Historical Society). Out of these stories, I developed both imagery and video that allows for the retelling in multiple forms.

These series present three different yet interlocking views of Jewish heritage. Stories carry us from the pre-war world of Radom, to the Holocaust stories of Vilnius, to the stories and traditions of early Jewish life that survive through the memories of our Twin Cities elders. Ultimately it is through story that this history is kept alive and passed on to succeeding generations. Through story, video, and artwork, this work furthers that effort.

This is a guest post by Susan Weinberg, local artist and writer. Her exhibition, “It’s All About Story,” can be seen at Bet Shalom Congregation, 13613 Orchard Road Minnetonka, MN. The gallery officially opens on October 27, from 6:30-8:30PM. At 7:00PM there will be an Artist Talk, with special guest Dora Eiger Zaidenweber. Free and open to the public. Gallery hours: Wednesdays through December 31, 9:00AM to 4:30PM; buzz for access.

See more of her art at: studio409art.com