One solution to closing the educational “achievement gap” that continues to spark interest is based on strengthening relationships between schools, parents, and surrounding communities, to ensure that all are more engaged. Modeled after the highly-publicized Harlem Children’s Zone, the goal of such efforts is to provide a full network of social, educational, and community services to children and families living in impoverished neighborhoods, and to do this from “cradle-to-career.”

Various community-based initiatives of this kind have taken root in the Twin Cities. One of the nation’s first Promise Neighborhoods is located in St. Paul. Part of a program launched by the Obama administration, it joins a network of Achievement Plus schools and new directives from St. Paul’s school superintendent, designed around a similar philosophy. Meanwhile, North Minneapolis is home to the Northside Achievement Zone, a grassroots effort to create a “culture of achievement” to help close the gap in that section of the city. Since both are relatively new ventures, the jury is still out on whether NAZ and St. Paul Promise Neighborhood will prove equipped to achieve what they’re designed to do, especially given the magnitude of urban poverty.

Amidst fierce competition, St. Paul was one of 21 communities in the nation selected by the Department of Education for a $500,000 Promise Neighborhood planning grant in 2010. The city then raised $250,000 in matching funds and in-kind contributions from area philanthropies and other partners. The Amherst H. Wilder Foundation is leading the effort, with support from several community partners. Angelique Kedem began as the initiative’s director just this month. Her job is to implement strategies developed during the planning year. 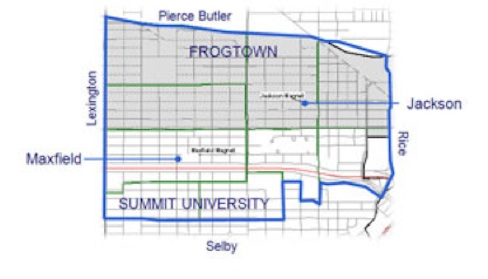 Kedem explains that St. Paul won’t know until December, at the earliest, whether it has been selected to be one of four to six sites receiving a $4 to 6 million, five-year implementation grant. In the interim, around 13 foundations have committed to funding Promise Neighborhood for the coming year. She says that the $670,000 they’ve contributed will allow the implementation of core pieces of the plan. A top priority is community-building, so that children will begin benefitting from wraparound services, including dental care and on-site nurse-practitioners in schools. Plans to develop a database so that service delivery partners “will gain a holistic picture of children as they proceed along the service continuum,” will also proceed; so will the building of hubs throughout the community where parents can receive services and access information. Parent engagement and community partnerships are key to St. Paul Promise Neighborhood’s plan and its success, according to Kedem.

Going forward, the initiative will concentrate on student achievement in two low-performing, under-resourced public elementary schools, Jackson Preparatory Magnet School in Frogtown, and Maxfield Magnet Elementary School in Rondo/Summit-University. One of the ways Promise Neighborhood serves as “a new model for St. Paul,” says Kedem, is that services and systems will be far more responsive to the highly diverse populations of students enrolled in the system’s public schools.

According to the U.S. Department of Education’s website, the vision of the program is that “all children and youth growing up in Promise Neighborhoods have access to great schools and strong systems of family and community support that will prepare them to attain an excellent education and successfully transition to college and career.” Because this applies specifically to children and youth living in the nation’s most distressed communities, a core component of the plan is to “transform those communities.”

Wilder reports that 56 percent of households in St. Paul’s Promise Neighborhood have incomes below $35,000; also that 89 percent of school children living there are eligible for free or reduced-price lunch. The area is noteworthy, too, for its high concentration of children age 18 and under, the percentage of residents who are refugees or immigrants, and for having an unusually high proportion of single-parent households.

Given that 20 percent of students in the United States are living in poverty, some question whether the modest amount of money being invested in Promise Neighborhoods will make a difference. The total amount divided among 21 applicants awarded funds in 2010 was $10 million. This year, $30 million went or will go to a new round of applicants and to fund implementation of a handful of existing projects. Education writer Liz Dwyer echoes concerns expressed by Kent Pekel, executive director of the University of Minnesota’s College Readiness Consortium, when she writes:

“In comparison (to Promise Neighborhood funding), over the past year and a half, the Obama Administration has put more than $4 billion toward its Race to the Top (RTTT) competition, making it the single-largest discretionary program in the history of the U.S. Department of Education. RTTT doesn’t fund wraparound services that help schools counteract the effects of poverty. Instead, the program…gives money to states that agree to expand testing, link teacher performance ratings to student achievement, and turn around struggling schools through removing and replacing school staff. Now, imagine how many Promise Neighborhood projects could be funded with the kind of cash Race to the Top received.”

In leading the St. Paul Promise Neighborhood, the Wilder Foundation brings with it 14 years of experience developing and implementing Achievement Plus. A public-private partnership formed between Wilder and city, county, and state governments, Achievement Plus was launched in 1997 when partners raised over $52 million in public and private funds. Like Promise Neighborhoods, the better funded local initiative’s primary goal was to improve achievement levels of schools located in low-income neighborhoods by stirring broad community support for public education and reconnecting schools and community to help reduce barriers to learning.

Dayton’s Bluff Achievement Plus Elementary School is one of four Achievement Plus schools frequently in the spotlight for showing signs of success by focusing on a standards-based curriculum that emphasizes high expectations for students, professional development for teachers, expanded after-school programs, and access to social services and learning opportunities at the school and in the community. Family resource centers, providing parent education, on-site support, and an array of resources, including health and dental services, mental health counseling, and tutoring are an important element of the Achievement Plus design.

Paul Mattessich, executive director of Wilder Research, expresses confidence that the Promise Neighborhood program will also contribute to more engaged community-school relationships, which in turn will result in higher quality educations for the St. Paul Public Schools students being served. He notes “a definite need in the neighborhood, to improve academic performance, but also the confidence, interest, and strength of parents who want to promote academic success, but need information or assistance to accomplish that.”

Community is placed front and center in St. Paul School Superintendent Valeria Silva’s “Strong Schools, Strong Communities” strategic plan, too. With its “Community Choice” system, this plan carves the district into six attendance areas to “promote learning close to home.” Students will be encouraged to attend community schools in their area, with more than a dozen magnet schools becoming community schools and losing citywide busing. In her announcement, Silva said, “We believe the changes we are making will reconnect many students to the communities where they live, truly making the schools the heart of our community.”

The Minnesota Progressive Project countered that, “in reality it is a budget-trimming maneuver that ends access to or slates closure of many district magnet and charter schools for students city-wide, as well as effectively ends true open enrollment options in St. Paul, particularly for students in low-income neighborhoods of the city (where ‘neighborhood school’ performances tend to be low and choices limited.)”

Keith Hardy, who’s running for reelection to the St. Paul School Board, says that his short-terms goal is to “help facilitate successful, equitable implementation of the Strong Schools, Strong Communities strategic plan,” by asking for input from stakeholders. As for what he prefers to call the “education equity gap,” Hardy wants to see students, parents and guardians, and community stakeholders take charge and become more actively involved, holding educators accountable.

Minneapolis and the Northside Achievement Zone

One of the things distinguishing the Northside Achievement Zone (NAZ) from St. Paul’s Promise Neighborhood is that it’s a homegrown initiative of a local nonprofit. The PEACE Foundation, a North Minneapolis-based 501(c)(3), was created in 2003 to spur a grassroots movement to reduce violence in that part of the city. After deciding that focusing on educational achievement was “the most effective, sustainable long-term strategy for ending violence,” it began partnering with NorthWay Community Trust to help create NAZ. In 2008, 40 other organizational partners joined the planning process. Then, in 2010, PEACE Foundation changed course and began focusing exclusively on managing the initiative. As with PEACE Foundation’s previous work, NAZ has developed a base of neighbor-leaders who can more effectively reach their peers. In its first two weekends of outreach, an Engagement Team signed up more than 300 families to learn more about NAZ. 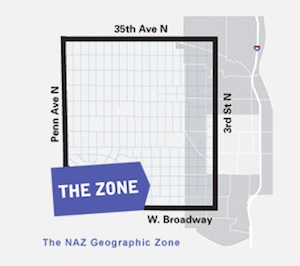 As Scott Russell explained in a 2009 TC Daily Planet article: “In some ways, the Northside Achievement Zone (NAZ) is taking a very different approach from the Harlem Children’s Zone. (Geoffrey) Canada raises millions of dollars for the Harlem Children’s Zone and runs the programs under one organizational umbrella. The Northside Achievement Zone is trying to knit together the work of dozens of independent community-based agencies and public programs to offer more seamless services to make sure everyone is pulling in the same direction.” On its website, NAZ is described as a collaborative effort that engages schools, nonprofits, city leaders, families and neighbors.

Where NAZ does overlap with Harlem Children’s Zone and the new, federally-funded Promise Neighborhood program, is that all focus on creating a “culture of achievement” in defined geographical areas. The shared goal is cradle-to-career support to ensure that all children and youth living in specific, targeted distressed neighborhoods or zones, go on to graduate from high school, prepared to succeed in college and careers. The outcomes NAZ is tracking are the percentage of NAZ children entering kindergarten ready to learn (in fall 2009, 26 percent met that criteria), the percentage who are at grade level in reading and math (in spring of the 2008-09 school year, 34 percent of fourth graders were at grade level for reading, and 32 percent for math; at the secondary level, 46 percent of tenth graders were at grade level for reading, and 19 percent at grade level for eleventh grade math) and the percentage who graduate from high school ready for college (numbers not yet available).

NAZ has its share of skeptics and critics and it’s been a source of some controversy. Questions have been raised about the drawing of the Zone’s boundaries. North High School lies nearly 10 blocks outside those lines. Also noted is that most of the 11 NAZ pilot schools are charter, magnet, or specialized schools; this at a time when, “half of the students in North Minneapolis have deserted the district’s traditional public schools for charter, magnet, or parochial schools, leaving places like North High grasping at straws and community members without many options.” Some are troubled by initiatives that borrow from business models, fearing that new reform efforts are leading to further corporatizing and privatizing of schools, at the expense of bolstering public education.