Crispin Glover was in town with his most recent cinema roadshow. I’ve not written about his films, though I’ve seen most of them, because I don’t know what I want to say or what I can say. His work as a director is perplexing. On the one hand he is doing a remarkable job four-walling and leaving his work as a Hollywood figure far, far behind. In some ways he has become an iconic indie filmmaker. Everything he does challenges the new norm of what independent filmmaking is about and should do.

Thankfully, indie film has mostly outgrown it’s propaganda phase, a style which put message dangerously ahead of things like story or charcter. Sadly, this has also meant it has accelerated a turn toward the commericial and irrelevent. Truly transgressive and confrontational films are only slightly more accessible now than they were twenty years ago. Some can be found online, but outsider filmmakers mostly rely on “underground” film festival screenings or gallery/basement presentations. Crispin Glover, for whatever reason, is pushing this kind of film closer to the surface of mainstream consciousness. 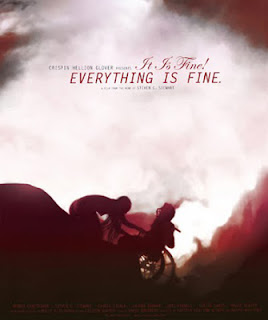 A few years ago there was an outbreak of vocal challenges to a screening of What is It? at the now defunct Oak Street Cinema. After the screening, a few viewers challenged the reasons behind Glover’s decision to work with actors with Down’s Syndrome, this was exploitation they said. I can’t say these voices were completely wrong, but they expressed criticism that Glover’s films invite. Nothing is his work or persona indicates that he ever thought this would not go without comment. He’s aiming to press people’s buttons and appears to be well aware that his cinema is confrontational on many levels. He doesn’t quite shock, but he does offer imagery a general audience will find charged.

Remarkably, a poet who spends some of her time in Duluth (when not in Europe) took enough umbrage with Glover’s screening that she wrote a blog in protest without having seen the film or learning that much about it. This is a link to the article as it is reproduced on a local arts blog. A debate ensued that spilled onto websites across the state, though as far as I know, there has been no response from Crispin Glover himself. I wouldn’t expect there to be, because she offered nothing in her text that he could actually respond to. While I have written out a longer critique of this blog, I’ve decided that this is more effort than the post deserves. One particular passage made me realize the futility of a sincere critical response:

“And as it turns out, one doesn’t have to wallow through an entire film to discern what it’s about and critique what it’s doing. Looking over the audience as we took our seats in the theater before Glover’s film, I had a feeling of dread I would be the only one to speak-up about the dehumanizing of women, and if I left, I knew no one would start that dialogue.”

Never mind that there is no evidence for her premonition that no one would speak up to protest. Because audiences in the past have challenged Glover and his films for any number of reasons. I can’t speak for Duluth, but I know for a fact that many in the audience for the Minneapolis screening had been present at the earlier screenings in which someone challenged Glover. Yet, this is a minor point compared to the gargantuan problems her point of view creates.

As someone who writes a significant amount about film and media, I take great exception to her idea that one doesn’t have to see an entire film to discern meaning or critique what it is about. If your goal is to critique a work, it is your responsibility to yourself, the artist and your audience to see the work in its entirety. If you can’t do that, then your response is about your reaction to the work and not the work itself. Film, like most art, is quite subjective and personal. One person’s experience of any film will often be vastly different from another’s. On an intimate level, none of us really experience the same film. A critic can record or chronicle their reading of the work, but they can never really hope to craft a definitive judgement on the value or effect of any film. The best critique is in conversation with the work it is inspired by.

Kat Mandeville is not in conversation with any of these films, because she has not seen them and is relying on second-hand interpretation of the work and the artist. Furthermore, her critique uses such broad and ridiculous rhetoric that there isn’t any conversation to be had. Because she has not seen the film, she has no real basis to argue from, so all her points refer to things alien to the world of the film. She posits many inflammatory analogies, playing a “What If?” game with the text itself. Her repeated references to civil rights leaders (invoking Martin Luther King, Jr. and Malcom X as if they were the same person) are meant to illuminate the oppression she sees inherent to the film, but as none of these figures are in the film it is a meaningless exercise. Crispin Glover had every opportunity to make race an explicit part of his confrontation, but chose not to.

There is so little respect in her tone for those in the audience or other viewers that it reminds me of a common right-wing critique of art. The impression I get is she thinks her voice is the only light that stands against the darkness that has duped the rest of us. We need to be saved because we are unable to make our own minds about this mass media. In her text, she suggests that male members of the audience have not considered the tragic part of life that the film engages with. She assumes that we are instantly allied with the fantasies and desires of his protagonist. Most insulting of all is her position that we cannot tell the difference between an artificial piece of film art and the actual documentation of real rape or murder.  Does she really mean to suggest there is no difference? Not only is this delusional, it is so disengaged with the text, the film, itself that her written opinion is meaningless as a critique of the film. At best, it is a carelessly written opinion piece about an audience for a film that only exists in her imagination.

Furthermore, the whole exercise is as absurd as the film itself. She is writing to protest the very themes and images which Glover’s film is confronting. There is no Hollywood subterfuge in Glover’s work, he is explicitly presenting troubling images in a blatant manner. Her point of critique begins and ends with the fact that a difficult film is difficult to watch. She doesn’t raise any points that Crispin Glover’s films won’t have already provoked in any thoughtful member of the audience. These films are easy targets because they are difficult to defend. This tactic has a precedent; arguments against comic books en masse were based on the most obvious cases of lurid art, arguments against heavy metal music en masse were leveraged off of the most crass and tasteless examples. Glover’s work is more defensible on artistic grounds, but the alarm her blog sounds rings out dissonant and worn.

As it stands now, it would appear that the real goal of her article was to raise the profile of her own voice at the expense of a renegade and poorly-funded filmmaker. I would suggest that if Kat Mandeville is serious about her cinema criticism she should look for larger and more challenging targets. There are plenty out there and they would yield more interesting results. Consider the sexualization of violence in the Texas Chainsaw Massacre remake versus the raw approach of the original. A close reading of the original The Girl with The Dragon Tattoo film vs the remake offers much to be considered regarding the reproduction and depiction of sexual violence. Gender issues in Zero Dark Thirty? Go for it! If she wants to stick with more accessible filmmakers, how about a survey of gender imagery in local film festivals? To what extent are these small fry merely accepting the ideology of mainstream cinema or how much are they presenting their own? A blog like this might get the attention she desires and raise an original and provocative issue.

Crispin Glover’s films are problematic and intentionally confrontational. I don’t claim to understand them or have any firm critical position. I have seen most of them, though, and this is exactly what stokes my interest and confusion about his directorial work. There are a great many voices online that would have you believe that meaning is fixed and there is one true reading of any given work, but this kind of film defies keyboard consensus. The range of reactions and the diversity of voices which have entered into the debate that followed the film long after the screening ended show that rather than mindless exploitation, It is Fine! Everything is Fine. is a crafty bit of filmmaking. Whether a hostile critic or fannish supporter, all intelligent conversation is rooted in images that are meant to provoke. So, as difficult as it may be to watch, or as impossible as it is to completely endorse, this enigma is something to be wondered at and respected. This is a rare piece of filmmaking, a film which leaves the viewer befuddled and asking a simple and sincere question: What is it?