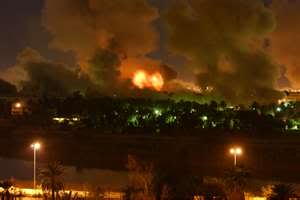 OK, for the time being, things are looking about as good as I dared hope, for President Obama’s reelection. But I’m not as sanguine as many; it just doesn’t feel right, to be that way. The bottom could still fall out of the labor market, though that looks unlikely. Gas prices could continue to rise, even after Labor Day, though most analysts seem to be anticipating a drop. When it comes to politics, I’m a die-hard worry-wart. But regarding this possibility, I think that I’m entirely justified in tossing and turning:

(About a week and a half ago), the Yediot Aharonot daily carried a front-cover story saying that Prime Minister Binyamin Netanyahu and Defense Minister Ehud Barak were seeking to launch a strike against Iran this coming fall. The report claimed that the prime minister and the defense minister were encountering stiff resistance to the idea of ordering the strike now from military and intelligence chiefs.

Netanyahu, a sick-minded malignant narcissist along the lines of Dick Cheney, would love to see Mitt Romney win the election, as that would almost guarantee a U.S. land war with Iran. Part of the rationale for an Israeli air strike on Iran’s nuclear facilities (which are not being used to develop nuclear weapons) would be to try to make that happen.

In fact, the electoral outcome in the U.S. wouldn’t necessarily be so certain. A massive spike in oil prices would hurt, but it would mostly be speculator-driven – Iranian oil production wouldn’t be substantially affected, by an air strike on nuclear labs – and could be countered by a release from the U.S. strategic reserve. And people tend to rally around their political leaders in times of military crisis. Finally, a whole lot of people here are sick and tired of the Israeli hawks and their crap. I know that I am.

One of the very few high-profile analysts that I take seriously, because events have generally proved him right, seems less concerned.

But the stridency of Netanyahu’s and Barak’s rhetoric alarmed Israeli president Shimon Peres, 89, who intervened with a major policy statement. He said he trusted President Obama on the Iran issue (definitely not a Netanyahu talking point; Netanyahu is more or less an honorary member of the right wing of the US Republican Party). Peres, who is closer to the traditional American Jewish Democratic mainstream, may also have feared that the clumsy attempt to blackmail Obama and intervene in the election campaign might do lasting damage to Israeli interests.

Since Israel’s presidency is symbolic, Barak and Netanyahu felt stung, and condemned him for publicly differing with them on policy.

Nevertheless, the Israeli press appears to believe that Peres’s intervention was decisive- despite his lack of power, he has influence with the military and intelligence professionals who also oppose Netanyahu’s rash threats against Iran. One Israeli commentator called him a ‘tie-breaker.’

I still think that the chances are probably at least one in three, that Israel will attack. And that that would turn an election that is currently “leans Obama,” into a nail-biter. It would be totally f**ked-up, but we’re all used to that, by now.