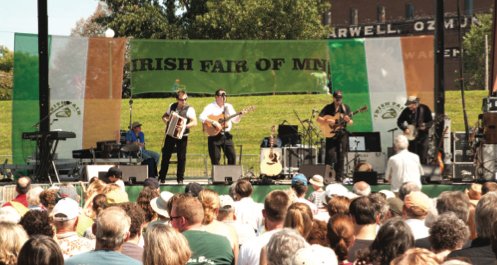 The Irish Fair’s site along the pewter-gray, spreading Mississippi beneath downtown Saint Paul on the ample greensward of Harriet Island is majestic and invites celebration. The bustling and music-crammed Irish Fair with its snowy canvas tents, its black-tinted signposts, and plentiful green turf offers an Ireland of the mind to its visitors. Whether Irish-American, native-born Irish, or simply a non-Irish person casually intrigued by the inviting complexity of Irish culture, the Fair’s lack of an admission charge, handsome location, and more than forty performing musical and dance groups gently stimulates the imagination.

As an Irish person who has lived in Saint Paul since the early 1990s, I’ve found that the Fair successfully evokes a multidimensional and culturally authentic idea and experience of Ireland’s heritage. Ironically, to a superficial and cynical observer, it appears to be a profoundly idealized vision of Ireland that suggests the often-satirized homely view of the country propounded by Eamon de Valera, Ireland’s stern but sentimental prime minister of the 1940s. If the ghost of de Valera could stalk the Camelot-like tents of the Irish Fair—could inspect the brilliantly costumed dancers, the looming Celtic cross, the melancholy but aristocratic Irish wolfhounds, and the marketplace and food booths—he would arch a pleased but surprised eyebrow. He would derive most pleasure from the Cultural Pavilion.

There is a tragic and profound irony beneath the apparently idealized Ireland of the mind on Harriet Island. The Cultural Pavilion contains not only walls of photographs and a tearoom but also a replica of a famine ship. If the ghostly fingers of de Valera were to reach out to this ship’s timbers, then the ghosts of the famine dead would stretch out responsive fingertips. Ironically, this “coffin ship” in part explains the vitality of Irish culture. After the enormous wounding of Ireland’s collective psyche by the famine of 1845–49 in which at least one million Irish people perished and another two million emigrated in a bitter scattering across the Western world (in particular, Britain, Canada, and the United States), there was a determination to preserve Irish culture. The widespread loss of the Irish language following the famine led to a grim need to save the culture, which in turn led to a rise in forms of Irish dance, sport, and music.

Cultural historians suggest that these forms of “radical memory” have permitted the Irish to re-create their culture all over the world. So much of the Irish cultural activities appreciated by the Saint Paul crowds are inventions of a worried nineteenth century, renewed in the 1940s by cultural nationalists like de Valera and re-invented by respectful Irish and Irish-American enthusiasts since 1980. It is the ironic melding of the idealistic and tragic ghosts of the famine and Irish nationalists that create the insubstantial pageant on which the enchantments of the Irish Fair rest.

(Photo courtesy of the Irish Fair)