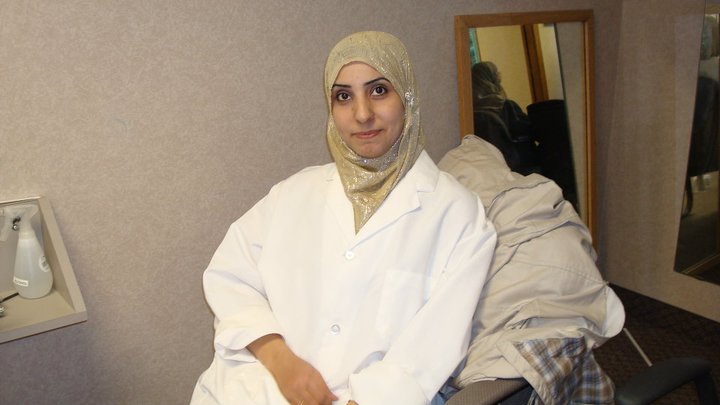 I met Ikhlas Muhassan Abbas as she waited outside the home of the family hosting her that night. Her mom, Fadeelah, was with her, along with a few of the people who brought her to the United States. She wore a plaid white and tan scarf. But the most striking thing was that, when I first saw her, she was standing up.

She was standing up thanks to brand new legs given to her by new friends in the Twin Cities.

As Ikhlas tells her story in a statement released by the Iraqi and American Reconciliation Committee, she was living her dream as a secondary-school teacher in Najaf six years ago. She had graduated from the University of Kufa with a B. A. in education a few years earlier. At the beginning of August 2004, the Mahdi army, then led by Muqtada al-Sadr, engaged U.S. forces in a fierce battle in Najaf. On August 5, Ekhlas was sound asleep when an errant U.S. missle struck her home.

It took me from one world to another, altering the course of my life and my future. I awoke in the hospital, unable to move or walk. I opened my eyes and I did not know what happened, or if I was alive or dead…!

Both of her legs were damaged enough that they had to be amputated, her left leg at the knee and her right at the ankle. Doctors gave her prosthetics, but they were not comfortable. “I got a wheelchair, but sitting in it makes me feel disabled,” she said. “I hate it. It makes me feel like I can’t achieve any of my dreams.”

Losing her legs made it near-impossible for Ikhlas to continue teaching. She was confined to her home and managed, through the help of an aid organization, to set up a small internet cafe to bring in some income. It wasn’t much, but that was her life until she met a member of the Muslim Peacemakers Teams, and made her Minnesota connection.

The Muslim Peacemaker Teams were founded by Iraqi-Minnesotan Sami Rasouli in early 2005. Rasouli, who still directs MPT, left Iraq more than 30 years ago to teach and ended up in Minneapolis. He returned in 2004 to help rebuild Iraq.

In 2005, Rasouli said, he was working with Iraqi Human Rights Watch in Karbala, 85 km up the Euphrates river from Najaf. He met members of Christian Peacemaker Teams, who are members of the Brethren, Quaker and Mennonite churches. Rasouli said the CPT selflessly tried rebuilding the country without proselytizing, patronizing or offering money. Rasouli was impressed by their work and founded MPT with the intent of training Muslim men and women to be peacemakers.

In 2007, the Iraqi and American Reconciliation Project was founded in Minneapolis, with the intention of building bridges between the people of those two countries  through its support of Muslim Peacemaker Teams.

When an MPT worker met Ikhlas, the worker passed her story along to IARP’s executive director Kathy McKay. Anne Nettles, whose husband Al is on the board of IARP, got in touch with a roomate of his from St. Olaf, Greg Gruman. Gruman is the President and CEO of Winkley Orthotics and Prosthetics and he agreed to supply Ikhlas with new prosthetics and physical therapy free of charge.

Ikhlas, Fadeelah and Mustafa, an eight-year old boy who is also getting prosthetics from Winkley, arrived in Minneapolis September 18. IARP was waiting for them and they all had tears in their eyes when they met.

Ikhlas and Fadeelah stayed with Anne and Al Nettles for the first week. Their early trip to the supermarket was another suprise for the two of them.  Anne Nettles described the experience in a message on their Facebook page: “…We bought strawberries, plums and a pineapple, which they consider precious jewels.”

Gruman and his team had the two prosthesis ready and said that Ikhlas might walk without a cane some day, if therapy moved as quickly as they thought. When I met Ikhlas, she was still using a cane. Luke Wilcox, IARP’s communications director said that the therapy is expected to take a month, although their visas last for six months, so they could stay longer if necessary. When I met Ikhlas her left leg was brand new, but she was using her old right foot prosthesis. The new one wasn’t quite right and is being worked on to be perfect.

Overall, Ikhlas said she has been overwhelmed by what has happened. She was suprised by the offer to come to America for new legs and said she will be eternally grateful to the people she’s met. “I’ll always treasure the memories of coming here for the rest of my life,” she said. When she returns to Iraq she plans to follow her dream and teach geography again.