I have to admit, the very sweet (hot) tea served in the tiny glass cups are a real treat even though I may regret the caffeine later tonight. So many families and individuals served me tea on my last sojourn to the Cradle of Civilization in 2002 that those precious memories are invoked every time I sip that hot, sweet beverage this week –although at the same time my heart breaks in not knowing how most of them survived during the war. One friend, a former teacher and an artist re-connected with me when she was able to be accepted as a refugee several years after the war exploded in her home town of Baghdad.

Fortunately Amal was able to sell enough of her oil paintings to international peacemakers and others that she was able to fulfill her plan to take her three young children to Syria during the early days of devastating bombing blasphemously named “Shock and Awe”. Awe, as I learned growing up in Sunday School was reserved for the wonder of the Divine, not the vain-glorious acts of mad bombers and empire builders. However, after Amal thought it was safe enough to return to her Karrada neighborhood in Baghdad, she had to flee again, this time to Jordan, after her children witnessed body parts lying on the street after several car-bombings near their apartment. Finally after another wait of several years she was able to come to New York as a war refugee, one of the very few our government has accepted of the many, many displaced families.

But I’m not sure that Amal’s story would resonate with my Tea Party friends [immigration not being a high priority issue] although I still have fond memories of drinking tea in Amal’s bomb-damaged house in Baghdad after 10 years had passed. (Her home was damaged when Bill Clinton ordered cruise missiles to strike a Republican Guard site across the Tigris River from her house and those bombs weren’t as “smart” as advertised.)

But the sight I saw this morning on our drive around the Kufa and Najaf city areas, and especially through the city neighborhoods, would illustrate the Tea Party ideology of “little government” to a T. Stretched across the highway, bundled together in what appears to be a haphazard fashion are dozens – if not close to a hundred – wires and cables. Ali, our driver and interpreter, tells us that someone in the neighborhood owns a generator; when the power goes out, this private entrepreneur sells his generator-powered electricity to his subscribers. [Honestly, just as I’m writing this, our power just went out 4 times for a few minutes. It is back on because this guest house has its own generator.]

When I saw the cobweb of wires suspended above the highway, I immediately had two reactions. First I thought of my young friend Mostafa who came to the US under the sponsorship of St. Joan of Arc Catholic Community in Minneapolis to receive medical attention and a prosthetic leg after suffering grievous injuries during the war when a live electrical wire hit him while he was playing on his flat-rooftop. All these electrical wires strung willy-nilly are an accident ready to happen. My second thought was when you “starve the beast” [government] enough, there are no resources left to re-build the necessary infrastructure we often take for granted: clean water and dependable electricity. The destruction of two wars which sandwiched a draconian economic sanctions regime, all at the behest of the American government, has reeked terrible damage to both of these necessities in Iraq today.

While the Water For Peace program run by the Muslim Peacemaker Team here in Najaf (and funded through donations to the Iraqi & American Reconciliation Project) and neighborhood privately-owned generators might be necessary stop-gap solutions, they are no replacement for what governments should be designed to provide. We do see signs of government-sponsored projects all around Najaf, especially highway projects to relieve the tremendous traffic congestion in an area that receives millions of visitors and religious pilgrims every year. In fact, some early neo-con enthusiasts for the War on Iraq back in 2003 had plans to completely re-make Iraq into a model economy for those obsessed with private enterprise as a cure-all. 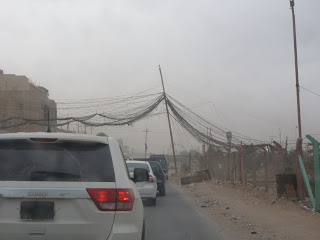 Naomi Klein, a Canadian investigative journalist wrote back then that proponents of that plan referred to “Baghdad, Year Zero” in their wet dreams of unfettered capitalism. Unfettered implies unregulated – at that is precisely what I see when the safety concerns embodied in haphazard wiring are either non-existent or ignored. How many more Mostafas will need the intervention of “charity” before the government is strong enough to not only regulate but also rebuild an infrastructure which negates the need for an electrical supplement? Lest you feel I’m aiming my criticism at the present government in Iraq, I should remind you that American tax dollars already paid billions of dollars to the mercenary military contractors to rebuild Iraq’s infrastructure after the initial fighting subsided but instead squandered the profits and subcontracted the work to other groups who apparently did the same.

I look in vain to see what American taxpayers bought over here. 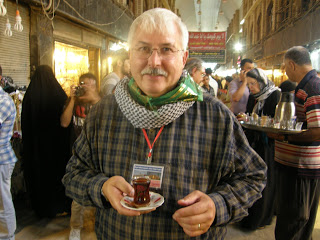 So the Tea Party I want to embrace are these lovely people who have warmly and graciously welcomed our delegation and are eager to relate to “unarmed” Americans. Despite all they’ve suffered through decades of war and sanctions, they are ready to “party” with anyone who is able to embrace their humanity and dignity. I lift my cup of tea to such reconciliation.