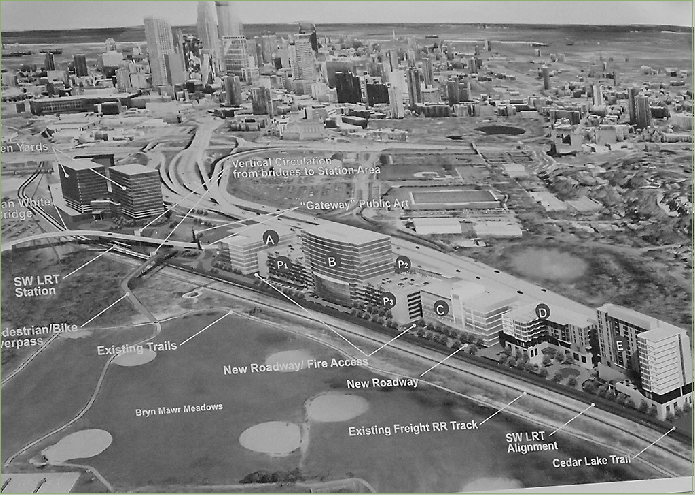 When all else fails, walk the site and show what people are talking about. That’s what the Bassett Creek Valley Redevelopment Oversight Committee (the ROC) decided as the next step toward their goal, getting rid of the city’s Impound Lot.

Unhappy with city staff who keep coming back with proposals to instead shrink the site, the ROC will be inviting the chair of the Transportation and Public Works Committee, First Ward Council Member Kevin Reich, as well as local council members, to come out and look over what so often gets discussed only in terms of aerial maps.

Neighbors, many of whom own businesses, say they have dealt with tow truck drivers blocking traffic while filling out paperwork or arguing with each other while idling on surrounding city streets. They’ve seen people switching license plates on the street. They’ve attributed rashes of break-ins and burglaries to being near the lot.

But it’s arguably a citywide issue of highest and best use for prime land near the center of the city, ROC members said, considering what to do to enlist media or otherwise get the attention of more decision makers; to make the issue as urgent as the recent debate over the Southwest Light Rail route. Mentioning civil disobedience as a strategy, Shauen VT Pearce, Executive Director of the Harrison Neighborhood Association said, “We have enough people to start blocking tow trucks.”

ROC member Brian Willette said “The first thing this committee did [about 20 years ago] is say we have to change the character of the area. A shrunken lot doesn’t do that. It is just prettying it up a bit.”

ROC member Jerry Krause said, “The fact that no one [anywhere else in the city] will accept this facility” shows how bad it is, and how weak the community is. They discussed the lot’s history as relatively recent and prior to that, the functions were at scattered sites, one presumed. The “built” date listed on the Hennepin County Property Information website is 1987, 27 years ago.

The city owns the huge odd-shaped parcel that holds the Impound Lot. It stretches westward from what would be Bryant Avenue to what would be Logan Avenue if both streets went through, north of the BNSF and Union Pacific tracks south of what would be Chestnut Avenue (one block south of 2nd Avenue North). Bryn Mawr Meadows is to the north of it on the western edge, and industries and adapted warehouses and other commercial buildings dot the landscape on the east.

This land is prime but also will be expensive to build on, said Jeremy Jacobs of Ryan Companies, their new Development Manager for the North Central Region. Ryan representatives have been working with the ROC for many years, having come up with Linden Yards West, a proposal for a huge business and housing campus. It would allow people to live, work and play all in the same area. Linden Yards West would take advantage of proximity to the expected Southwest Light Rail Transit.

The Impound Lot is near their proposed site, which has been referred to as “the banana.” “The future of the Impound Lot is a community issue first, then a development issue,” Jacobs said, “We could get behind a partial solution. We need the police cars moved.” (The site includes a police forensics operation and police holding of cars for evidence.)

When ROC members said essentially “shush, don’t say that, we want it totally gone,” Jacob said Ryan would be supportive of that stance, but reminded them the company was already on the public record as being open to a partial solution. “Development when done right can change a community,” he said. Eyes on the street, beautification, gentrification can push crime into other areas, and put pressure on to remove remaining blight.

Rev. Charles Stalling, potentially a new representative to the ROC from Harrison neighborhood, likened the process to chess game in which one party knows that if their opponent got their act together they could win; but they draw out the game to delay that eventuality.

Jacobs explained Ryan’s market challenges. Southwest LRT, a long-range benefit, may be delayed further by litigation. Then, “the Minneapolis office market has never been worse, but in three to five years there will be a wave of young employees” not impressed with the aging work places in downtown Minneapolis. Smart businesses will locate in or relocate to such areas to attract a workforce that wants live-work-play, he speculated.

Ryan has invested “probably $2 million” into investigating and designing to the area’s potential. Where rents in existing buildings are topping out at $24 per square foot, their project will require $25 per square foot. “They’ve been doing their due diligence,” he said of his colleagues. Having lots of conversations with potential users, “and the big question is what’s it going to cost. There are no sewers there, and in a way that’s good,“ Jacobs said, recalling an opportunity in Vancouver where the developer would build their own ecosystem, a chance to be innovative and environmentally conscious.

“And that’s the marketing side of it,” said Pat Carney, a ROC member whose graphics and marketing agency is on Colfax and Glenwood. “Do we want this area to be known as having an elevated highway and rusted cars, or an elevated highway and a world class art gallery? Because that’s where we are, the Sculpture Garden is within walking distance, but the Impound Lot is in the way.”

The city’s side, and residents’ challenge

Back to the local, immediate chess game. Beth Grosen of the city’s Community Planning and Economic Development department attended the meeting as she has attended many meetings. The Impound Lot is the Public Works department’s facility; Grosen does not have jurisdiction over it, but would help facilitate changes. Grosen and community members have agreed that the city staff and elected officials’ stance on the lot has been: “The previous city council tied our hands, we can’t move it.”

“I have consulted with electeds,” Grosen said, “And they still say shrink, improve, redevelop as much as possible. My goal is to try to really shrink it, that junk cars should not be the view. It should look like a corporate parking lot. My personal preference is to move it east. “

She said the Public Works staff have taken complaints to heart, and they are working on rules about doing paperwork at the site of a tow rather than while waiting to get into the lot. “They’ll try to get the trucks off the public streets,” now and in designing the access to a shrunken site.

Russ Adams of the Alliance for Metropolitan Stability said, “I’m not convinced we’ve exhausted alternatives,” and mentioned an underutilized spot at Fort Snelling where perhaps a six-acre site could be used if built into a simple two-level parking ramp. (Twelve acres is the smallest footprint that officials have estimated could accommodate the basic impound function.)

Jules Inda raised a possibility, discussed before, of moving the lot to the end of the Hiawatha line under some overpasses near the airport. Grosen said staff had looked into that and found the zoning was wrong and the Metropolitan Airports Commission staff didn’t want it. Inda said, “I would ask for an investigation of what it would take to re-zone. There’s an opportunity there, to improve a neighborhood [here] and not sacrifice anything” on the other end, with no residences or businesses at the airport site.

Inda made the point that people now need to walk about four long windy blocks in the winter from the nearest bus to deal with their cars. And these are often people who are elderly, handicapped, or who have other challenges, which led to their inability to deal with avoiding the tow in the first place.

The idea surfaced again, of keeping vehicles within the neighborhoods or blocks they’ve been towed from during snow emergencies. One of the committee members has experience with this program in Rochester, MN (see NorthNews, May 28, 2014).

Vida Ditter of Bryn Mawr neighborhood, who like many around the table have been dedicated to the ROC since its formation about 20 years ago, said “we complained and [Public Works Director] Steve Kotke put a stop to improvements to the building four or five years ago. We’ve asked these questions before.”