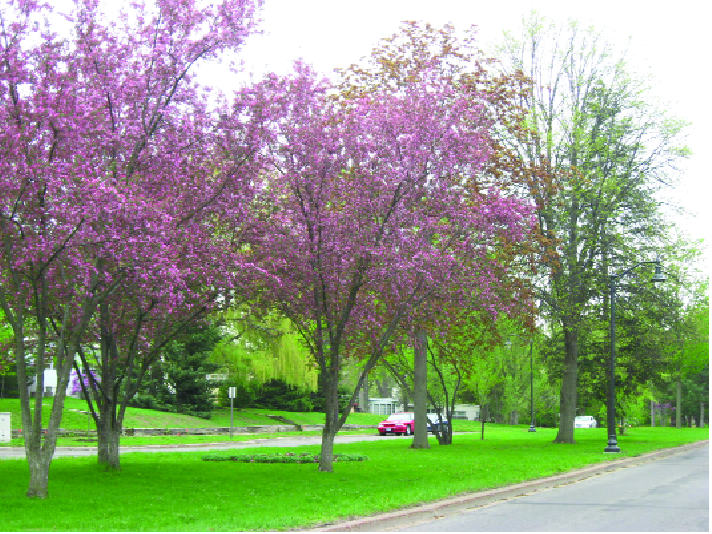 The emerald ash borer has arrived in Northeast, Dutch elm disease never left, and the next fearsome pest on the horizon just might be the Asian longhorn beetle, big as the first joint on a human thumb, with antennae that measures two inches across. That beetle, by the way, isn’t so fussy about its diet and shows a fondness for many different types of trees.

Minneapolis Park and Recreation Board (MPRB) director of forestry Ralph Sievert and Columbia Heights’ public works superintendent Lauren McClanahan recently talked about challenges facing local residents’ yards and gardens, now that spring has finally arrived. McClanahan estimates that the growing season is about two weeks behind schedule. Bugs and beetles, however, are already ravenous and ready for action.

“The insect can be in the tree, but until the population is large enough that the woodpeckers find it, you wouldn’t even know about it,” he said. After the woodpeckers show up, in some cases the bark will split and reveal galleries of larvae.

When asked how long it takes the emerald ash borer to kill a tree, he said that at Fort Snelling, where the invasion had gone undetected, they estimated that the trees died in about four years. “It’s kind of a bad thing,” he said.

The park board has been phasing out ash trees and planting groupings of Kentucky coffee, hackberry, burr oak, and disease-resistant elms instead. “You want trees that will make a mature canopy. When Dutch elm disease hit, 95 percent of all the boulevard trees were elms. After that, a plan to diversify was made on a block-by-block basis. About 20 percent of those trees planted were ash trees,” he said. Thanks to the ash borer, that didn’t turn out to be a perfect plan, either, because entire blocks are going to lose their ash trees.

“You can treat a tree [with chemicals], but you have to be committed to it,” Sievert said. “A treated tree does survive, but in Minneapolis there is a resistance to using pesticides to treat trees. We allow people to treat boulevard elm and ash trees. You have to use a commercial company we approve. It costs $10 to $12 per diameter inch of tree, so that would be about $200 for a 20-inch tree. In the treatment method, the chemical goes into the trunk. It lasts about two years.

“There are also treatments homeowners can buy at hardware store and put into the soil. It costs less than the other treatment. You dig away from the root flare and it kills larvae internally. They are right under the bark. If you’ve got an ash tree in your back yard shading your deck, you might want to consider treating it. It would be much more expensive to remove it. It’s a decision folks have to make; there are more ash trees on private land than on public land,” Sievert added.

He said that while the emerald ash borer can fly, the most common way it travels is when people unknowingly transport infested firewood from one area to another. Hennepin and Ramsey counties have state quarantines, he added, which means that people cannot take firewood out of those counties.

Now, about that Asian longhorn beetle. It’s big and it flies, and it bores deeply into a tree. “They have found it in Chicago, and they did such a massive eradication, cutting down trees everywhere, that they actually eradicated it,” Sievert said. “It showed up about 15 years ago; its main impact has been in Chicago, New York, and parts of New England. We don’t have it here, but we’re always thinking about it.”

Sievert said although spring came late this year, it shouldn’t be a problem for trees and plants. “Last fall was on the dry side, which doesn’t help the trees going into winter, but we had enough snowfall that it seems we will replenish the moisture. We’re still a bit in a drought stage. Just remember to water trees and plants from mid-June to the end of August.”

Speaking of watering, he added that Minneapolis residents can get watering bags for boulevard trees from park board staff. Park board staff prunes, plants and removes the trees, but it helps if residents take responsibility for watering. “The green plastic bags hold 20 gallons and you fill them up once a week through the summer. There’s a zipper on them; you open the top and put a hose in. Water seeps out of tiny holes in the bottom of the bag and waters the tree. It only costs about three dollars for the season on your water bill. We really appreciate it when people do the watering. It helps the trees stay healthy. Last year we had about 800 requests for them.”

Columbia Heights’ McClanahan, who describes himself as a forester “by decree, not degree,” said that everything he’s heard about our cooler spring indicates that plants will be fine as long as they get some moisture. “There was a late leaf-out of trees, about two weeks behind schedule. Some plants may have suffered frost injuries; some species are stronger than others. Some will die no matter what.”

They have not yet found the emerald ash borer in Columbia Heights, he added. “The City will take care of boulevard trees. We’re in the process of evaluating the extent of the problem we do have. We hired a forestry intern this year who will inventory park and boulevard trees.”

He said tree parasites are a big problem for smaller municipalities, which have limited resources and manpower. Columbia Heights, for instance, does not have a forestry department. “Dutch elm disease has not gone away. It’s still very prevalent. The beetle flies and also can ‘root drift.’ [Root drift is traveling underground through the roots] The Asian longhorn beetle is an invasive species that so far is not as widespread. It is easier to see and diagnose.”

McClanahan said the University of Minnesota’s website carries “a wealth of information” on pests such as the emerald ash borer. “It’s a very good reference, and it explains treatments. If you choose to use pesticides, you have to research them properly. Read the directions, use chemicals responsibly. If you hire a company, make sure it is licensed and bonded.”

Meanwhile, Heights public works staff is busy planting trees. “We will put in 100 bare root trees this spring.” Trees come three ways: containerized, ball and burlap, or bare root; the bare root ones are small, 1-inch in diameter. They are kept in coolers until planted in the spring and tend to end up being stronger trees, he said. The suburb, like Minneapolis, is diversifying its plantings: Kentucky coffee trees, maples, white oak, disease-resistant elms. “We’re also trying our first ginkgo. We’ve been diversifying since 2005, and we haven’t planted any ash trees. We’ve been doing cosmetic removal of ashes; we took down 30 ash trees that were in bad locations.”

Columbia Heights staff is trying to figure out how to handle trees on private property. “It’s important to maintain the tree canopy, for storm water control and air quality. We’ll be looking at the budget and the tree inventory when it’s completed,” McClanahan said.

Find more information on the University of Minnesota website, www.extension.umn. edu/issues/eab; and the Minnesota Department of Natural Resources website, www.dnr.state.mn.us/invasives/terrestrialanimals/eab/index.html.