We first saw the term guerrilla gardening popping up in our own backyard in 2009. Over in the United Kingdom, Richard Reynolds had been gardening “with or without permission” since 2004, encouraging people to simply beautify and make use of unused and uncolorful areas around the city, despite who owns it.

“Let’s fight the filth with forks and flowers,” writes Reynolds — a catchy slogan. Other guerrilla gardening efforts have sprung up in Germany, France, Canada and even here, in the United States.

In Los Angeles, the Greenaid project creates and distributes “seed bomb” vending machines. Old gum ball machines have been converted into dispensing not candy, but rather small balls of clay, compost and seeds mixed together, which the guerrilla gardener is encouraged to chuck onto a patch of uncultivated land. A list of locations on Greenaid’s website helps curious green-thumbs locate and purchase “seed bombs” from one of their many vending machine locations. 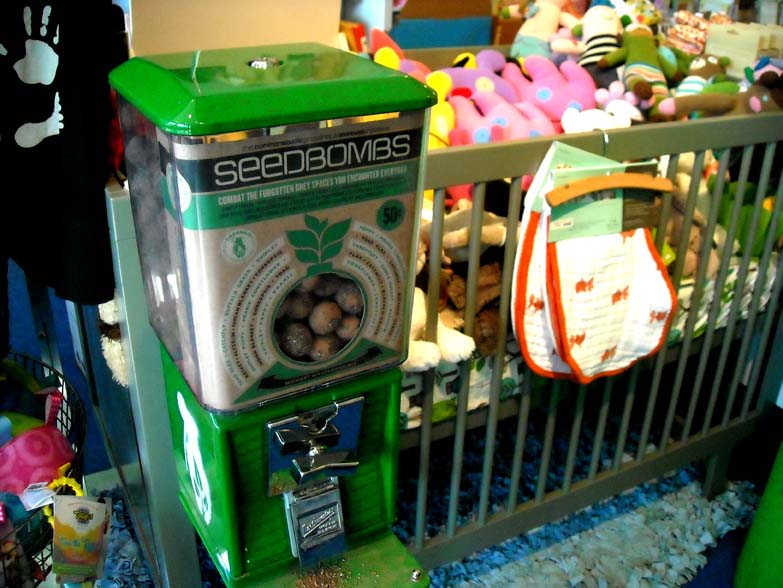 Pacifier, a retailer of nursery products (such as baby toys, clothing and furniture) is Minnesota’s sole location for “seed bomb” vending.

“I found it on a blog,” said Pacifier store owner, Wing Witthuhn, “I thought it was neat. It sort of ties in with kids — seeds, seedlings growing.”

Witthuhn herself admitted not knowing much of guerrilla gardening or its purpose and as you look around the store, filled with baby rockers, stuffed animals and rattles, the vending machine almost seems misplaced — an accident perhaps.

Even the customers purchasing from the machine sometimes find themselves surprised at what they are actually buying.

“I don’t know if he was joking,” Witthuhn recalled, “but [a customer] bought one and then put it in his mouth.” She laughs, but looks disgusted.

Some active guerrilla gardeners think the “seed bombs” aren’t an effective method at all, at least not in our climate.

Russell, who has been gardening on lands with or without permission for more than seven years, started doing it before she knew it had a name. She currently maintains three active gardens, all in NE Minneapolis, but has permission only for one.

Her main garden, at the intersection of NE Spring St. and NE Washington Ave., has been approved by the Minneapolis Parks and Recreation Board, and now has access to water through the city water main. The garden is small but lush with life — poppies, lilies, roses, cone flowers and even a barberry bush thrive on the small triangle-shaped, road median, otherwise surrounded by asphalt.

To Russell, guerrilla gardening is all about community building and commitment. A car drives by, honking and waving at her. “Hi, Robin!” the driver yells.

“See, they know me,” replies Russell. “I came in and made a change, I feel responsible on following through on that.”

Over in St. Paul, local guerrilla gardeners Shawn Bartsh and Jeanne Weigum also continue their efforts without the aid of “seed bombs.”

Bartsh only has the time to maintain one garden but has planted trees along public land on Mississippi River Boulevard — a tactic similar to using “seed bombs.” She may be the only one who knows her handiwork, but nonetheless they remain there and are thriving without further tending.

Weigum also believes the “seed bombs” are ineffective. “Those are extremely harsh environments,” she said, believing users would throw them from their cars onto patches of hard, infertile land, ridden with weeds. “The weeds, they’re just insistent.”

She maintains eleven gardens and mostly with permission from the city.

“I’m not exactly a rebel — I’m just a gardener who wants to see the appearance of the community improve.”

As for our lone “seed bomb” vendor, sales haven’t been too high and the vending machine remains over half full.

“It’s younger people,” Witthuhn said, when indentifying the “seed bomb” patrons, “usually in their twenties. Sometimes it’s parents — to do it with their kid.” Curious or committed guerrilla gardeners have a month of summer left to purchase “seed bombs” for 50 cents each at Pacifier, 310 E. Hennepin Ave.

“Having the idea out there is good,” said Russell, “someone may be inspired and take it to the next level.”