The issue of net neutrality has dominated headlines recently, and the outcome of this ongoing debate could have profound implications for the expansion of high speed internet into rural areas of Minnesota. Monopoly power among internet providers has allowed them to raise prices and offer faster content delivery to select customers, creating an internet “fast lane”.

Many policymakers, including Senator Al Franken, are pushing for limits on these practices; one possibility that has emerged is the reclassification of broadband as a public utility. The Federal Communications Commission is currently considering this option as a way to regulate service quality and guarantee equal access to high speed internet.

Problems of equal access are often framed as discrimination based on the demographics of internet users or the type of content in question, but location is an important factor in broadband access as well. 25.6% of Minnesotans have no access to high-speed internet, and almost all of these citizens live in rural areas of the state. 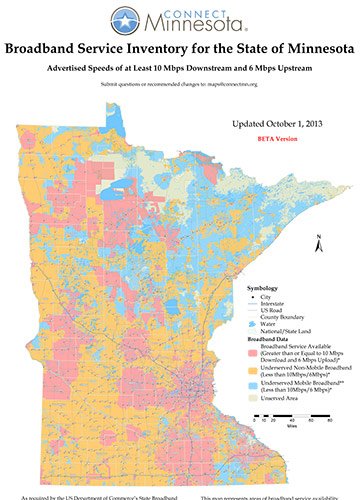 The infrastructure required to bring broadband to the most remote parts of Minnesota is extremely expensive. However, if broadband were treated as a utility, rural residents would have the same rights to internet service as they do to water or electricity, and internet service would be expanded regardless of cost.

FCC Chairman Wheeler has supported limiting internet provider power, but he is not in favor of reclassifying broadband as a public utility. Even if Wheeler and others who oppose treating broadband as a common carrier have their way, there is still hope for rural Minnesota to improve broadband access.

Minnesota has a strong precedent for rural counties developing cooperatives to provide services in high cost areas; municipalities began building cable networks in the 1980s and fiber networks in the early 2000s. If a similar system can be developed to provide broadband service to rural Minnesotans, municipal control can be a viable alternative to reliance on the outcomes of the net neutrality debate in deciding the fate of rural Minnesotan internet users.