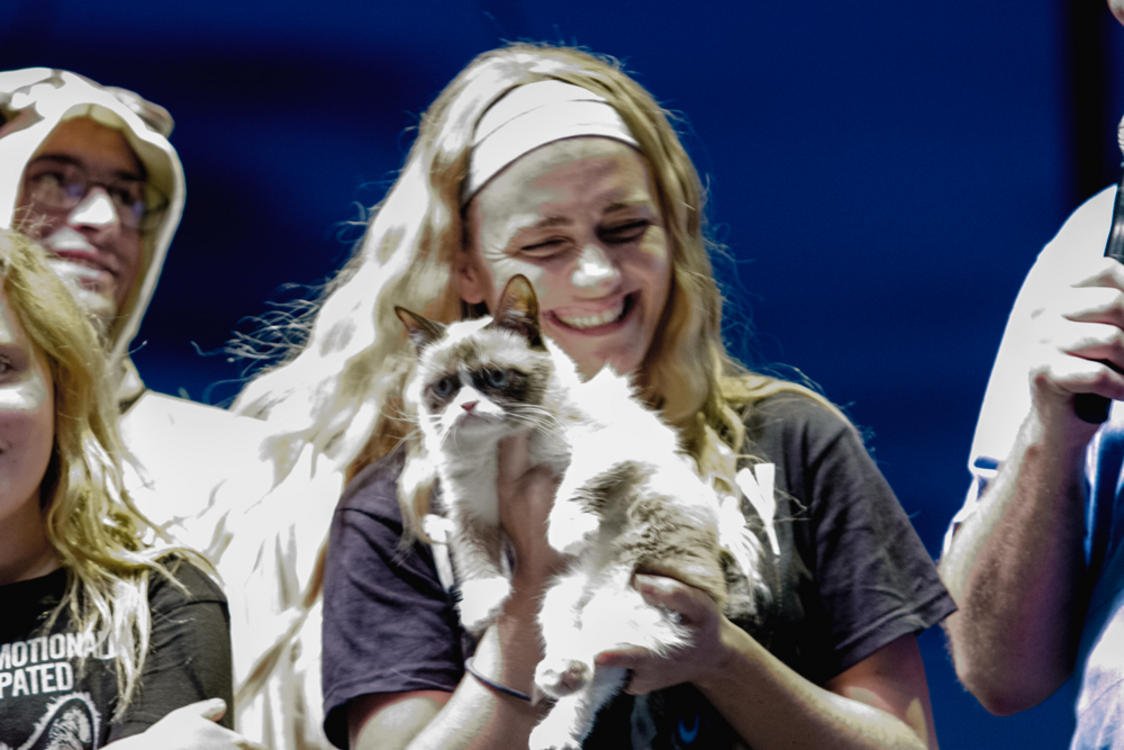 The 2012 Internet Cat Video Festival was a zeitgeist moment if ever there was one. Over 10,000 people crowded the green hill outside of the Walker Art Center to pay tribute to the many felines that undoubtdley have gotten them through late nights and workplace tedium. Views of the screen were premium and it was clear that no one, including the Walker Art Center, anticipated just how many people would show up to watch something you could see online. The mood throughout that screening was electric, the sensation of knowing that you were part of something deeply unique and special. In it’s own LOL-way, the cat video festival was the most anyone could hope a film screening would be. The Walker took the show on the road, and it was clear that the cat video festival was going to be around for awhile. Yet, with any zeitgeist, the question loomed as to how they could possibly sustain the anarchic magic of Henri, Maru and Nyan’s big-screen exploits.

Moving the event to the State Fair was an interesting choice. On the one hand, placing it in the center of Minnesota’s collection of culture, outside of the somewhat rarified Walker Art Center, put the viral phenomona right where it belonged. The risk that shadowed this was whether or not people would pay the $20 it would take to see the films, and if it would lose what made it special by intergrating it with such an institution. Attendence at the 2013 Internet Cat Video Festival dispelled the first doubt; all 17,000 Grandstand seats for the festival were sold and most of them were occupied, despite the nearly 100 degree heat.

Prior to the show, the milling crowds shopped the merch booths, had their faces painted, interacted with Animal Planet video crews or demonstrated what their own felines sounded like to a Walker sponsored interactive piece by Maria Mortati.  As the sun set, Brian Laidlaw and the Family Trade took the stage and opened with a cat-themed song. The band was clearly having a good time and were quite at home on the Grandstand stage. After their short set, Koo Koo Kango Roo (creaters of the Cat Video Festival musical theme) took the stage and occupied it with several cat themed raps. Bryan and Neil were obviously having as much fun as the crowd and captured the silly heart of the cat film genre in their short drum kit-less set.

Local cat video autuers Paul Klusman and TJ Wingard debuted their new cat music video and talked a little be about how they started their careers as cat video luminaries. A short time afterward, Julie Klausner took the stage as M.C. for the film fest proper. She performed a short stand-up reflection on her relationship with cat videos. This included the premiere of her own cat video satire which played with the tropes of cat videos in a mock behind-the-scenes expose. The video was funny and knowing, but illustrated something which would occur throughout the evening. Videos made about cats by people aren’t nearly as funny as videos of cats doing what cats do. After this, she welcomed cat video luminaries on the stage. Will Braden (Henri Le Chat Noir) offered some cat video-maker advice and explained how Henri’s life has changed with his stardom. Chris Torres (Nyan Cat) and Charlie Schmidt (Keyboard Cat) joined Klausner onstage for a brief chat about the history of thier respective cat videos and how both of them were far ahead of the cat video curve. Schmidt presented Klausner with a singing Keyboard Cat toy.

Maddie Kelly (Kittens Inspired by Kittens) came onto the stage alongside of Pudge the Cat and her assistant Kady Lone. Maddie talked about her own internet fame, managing her own Facebook page, and wowed the crowd with her animatronic cat ears. Klausner asked for the backstage gossip about Pudge, was corrected on the matter of Pudge’s gender, and recovered with a clever quip about Minnesota’s equality status which got a few cheers from the bandstand crowd.

Klausner prepared the audience for the main event by explaining that they would need to restrain their cheering until after the next two celebricats left the stage, because one of them was quite skittish and nervous. After this, headliners Grumpy Cat, Lil Bub, and their respective attendents shared the stage for the first time. There was a brief interaction between the two, but Lil Bub was more interested in the kitty carrier and sitting on Mike Bridavsky’s (her personal assistant) lap. They left the stage and the audience exploded with barely contained whistles, applause and screams. Someone suggested Klausner might want a cigarette.

Klausner assisted with the unveiling of the Butter Cat for 2013 and an introduction to the sculptor Linda Christensen. Butter Cat was significantly more epic looking than the group of kitty oddballs that shared the stage thorughout the evening. Much closer to being a butter sphinx, the sculpture appeared like an homage to the mythic power of cats throughout the ages.

After an appearance by Animal Planet (media sponsor for the festival) Senior Vice-President Vicki Lowell, the screening began. A long promo for Walker Art Center drew boos from a crowd that was very eager for LOLcats, but the following collection of cat video greatest hits and rising stars kept them laughing and cooing for the rest of the evening. The curation of the festival has expanded a bit from the original festival, as it included a few highly-produced sketch videos about cats and one video which featured actors acting like a cat and a dog. The category title cards were intentioanlly or unintentionally superflous, as all the videos could be described, not too surprisingly, as “cute” and “funny”. From a critical perspective, it’s easy to see that the cat video form is maturing and devolping into genres. There are the amatuer videos, which are the heart of the whole thing, there are the constructed videos crafter around a cat’s personality, and there are the more highly-produced videos which are more about the people making the video than the cats themselves. The last of these were the weakest of the festival, as they lacked the charm and invention of the cat-centric video and felt more like the trying-to-be-viral videos of Funny or Die!. Nothing wrong with these, but they felt like they lacked the joy and charm of the videos which featured cats.

Henri Le Chat Noir has also had a profound imact on the cat video form. There were more then several videos which took the basic idea of Henri (angsty cat) and took it in slightly different directions. This was interesting from an art survey perspective, but they were less charming and so clearly influenced by Henri that they didn’t really seem to have earned the festival spot on thier own creative merits. I suppose you could go down an internet meta-wormhole and considered the possibilities of meme influenced “viral” videos, but that is also outside of the playful spirit of the festival.

After the screening, the festival concluded with the presentation of the Hall of Fame awards and the 2013 Golden Kitty to Grumpy Cat. She looked a little bit excited, but it was hard to tell. Maybe it was the heat. Regardless of the inscrutable expressions of Grumpy Cat, the smiles and cheers at the end of the evening demonstrated that the Internet Cat Video Festival had grown into something different, but still special and still deeply important. All the while, distracting us with silliness like a dancing laser pointer or rolling ball of catnip.