The discussion, held inside the offices of the American Refugee Committee, focused on everything from war, conflict and human trafficking to AIDS prevention and treatment, and nutrition and clean water needs. US Rep. Keith Ellison chaired the discussion with California Congresswoman Karen Bass, ranking member of the House Foreign Affairs Subcommittee on Africa, Global Health and Human Rights. Lilian Greenwood, a member of the United Kingdom Parliament, also participated. Greenwood is part of a six-member U.K. delegation shadowing various U.S. representatives. 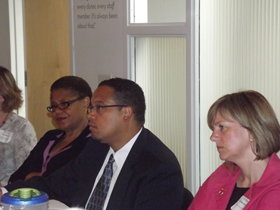 Greenwood said even though nations may be experiencing tough economic times, they cannot abandon commitments to troubled nations, many of which are in Africa.

“When we are seeing economic suffering at home, it’s important to see that we do not slow-up on our commitments across the globe for those in need,” said Greenwood, who noted that England is seeing great poverty among it’s African refugee population.

Ellison noted that one of the bigger issues with respect to providing aid to African nations is a lack of organizational cooperation.

“We can do more if we work together,” said Ellison. “We all need to work together as global citizens if we are going to change the world. Several groups are doing a lot on AIDS, but malaria is killing more people than AIDS.”

“We’re at this amazing time when we’re almost able to end AIDS, yet 20,000 people are dying a day from preventable diseases,” said Melancon.

Bass said one of the biggest hurdles to providing relief to nations in need is changing people’s attitudes here at home. Bass noted that several recently elected representatives affiliated with the Tea Party, a conservative wing of the Republican Party, have a very limited world view.

“A lot of the folks in Congress don’t even have passports,” said Bass. “People far overestimate how much of the U.S. budget is spent on foreign aid.”

According to Bass and Ellison only about one percent of the United States budget is allocated for foreign aid.

“I’ll hear people say we’re [U.S. government] spending way too much on foreign aid and I’ll ask how much should we be spending. People will say things like three percent [of the U.S. Budget],” said Ellison. “I say great, I’ll take that. That’s three times what we’re currently doing.”

Matt Oquist of Kids Against Hunger said providing assistance abroad goes a long way towards improving the U.S. standing in hostile regions. Oquist said prior to the tsunami that hit Taiwan, Taiwanese had a poor view of Americans.

“But once the U.S. Navy began providing aid in food and water, (the Taiwanese) had a 70 percent favorable view of America,” said Oquist.

Jaylani Hussein of the American Relief Agency for the Horn of Africa concurred with Oquist.

Eric Williams, aide to Bass said he was impressed with the level of compassion for others coming from Minnesota.

“It is so awesome to see so many groups in Minnesota dedicated to global (human rights) initiatives,” said Williams.

Ellison and Bass said they will plan a trip to Somalia to see what can be done to assist that war-ravaged nation. Minnesota is home to the largest Somali-American population in the nation.