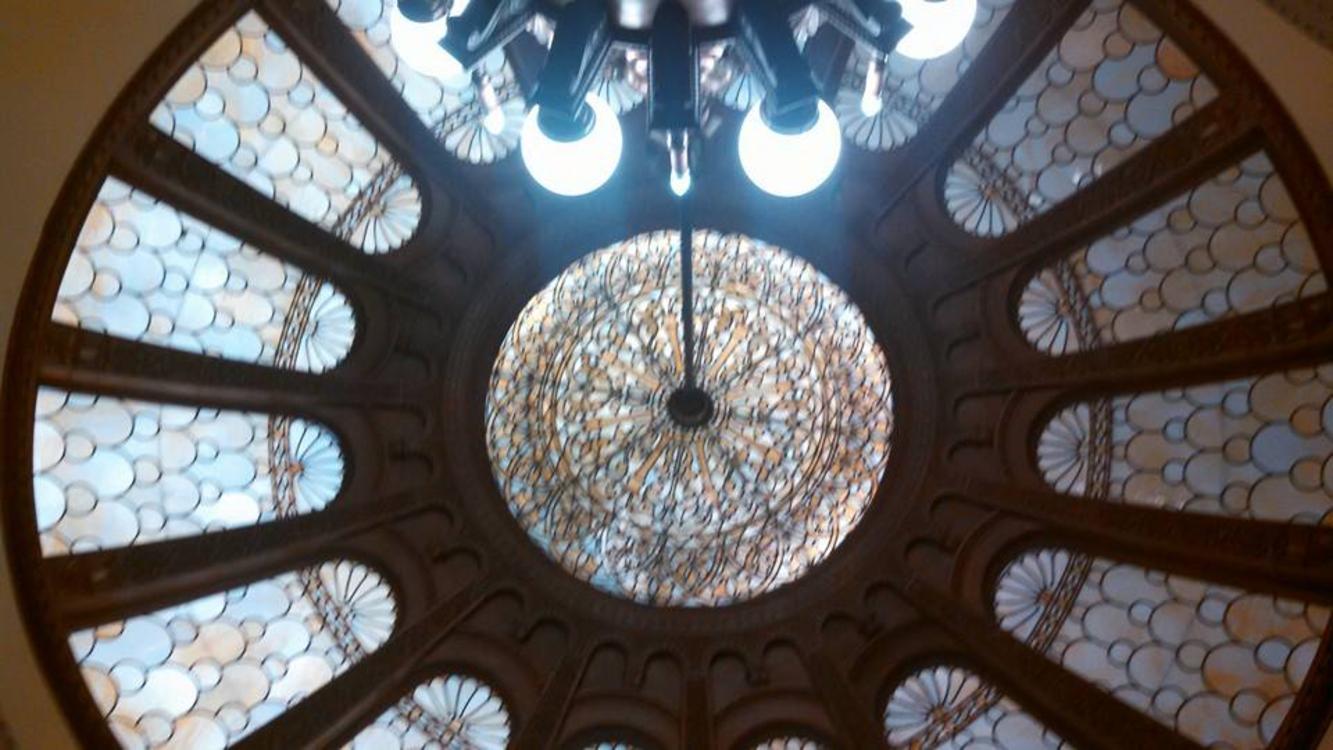 Pictures taken in the Landmark Center

Monday night my favorite 10 year old and I went to the Innova Hi-Fi Club. It was a cold day and a Tweet from the Secrets of the City that sparked our interest in venturing out for something completely different. Here’s the Tweet that got us out the door…

It was an old school record party held at the Landmark Center with a handful of the friendliest people with an incredibly deep understanding of music. There were eight or nine of us in an elegant former courtroom on the fourth floor of the Landmark Center sitting the dark listening to ambient tuba and metal music – not heavy metal, more industrial metal.

It started with Tom Heasley’s On the Sensations of Tone. On it he plays the tuba – but not tunes, tones. He records himself and plays loops on top of loops. It’s a technique that’s popular now but wasn’t as common 15 years ago. My 10 year old described the sound as a whale swimming in pink. I myself have often described ambient music as whale-sounding. I think the pink comes from the fact that she liked it and it seemed like happy music.

We also heard Peter Warren and Matt Samolis play large sheets of metal. The 10 year old’s description of their work was like a metal whale swimming in an ocean of scissors. There definitely was a strong metal sound but also she found it creepy like the bottom of the ocean. I believe I heard Innova director Philip Blackburn describe is an enharmonic, which led to some music research that we may or may not understand. But I felt like that was part of the goal of the night to tread musically into new ground with hosts who support local music and musicians.

Innova is local record label. They have produced something like 500 albums from a wide range of musicians. When Chris Campbell, the operations director, found out that my 10 year old colleague played the flute, he quickly and kindly found half a dozen CDs from their collection for her; a demonstration of their thoughtfulness but also the range of their collection.  Cohosting was the Minnesota Music Coalition devoted to serving Minnesota’s popular musicians by showcasing their talent and providing them with the skills and resources to have sustaining careers in music.

They will be holding another HiFi Club night and we’ll keep an eye on Secrets of the City for the heads up!