Is wealth and income inequality holding the economy back? A recent study by the Pew Foundation shows that from 2009-2011 the wealthiest 7% of the US saw their net worth climb 24% – to an average of nearly $3.2M – while the other 93% of the population saw their wealth plummet 7%. More than being unfair, it may also be holding back economic growth overall. The rich may be happy with their take, but it may stop coming.

A number of studies have shown the effect over a number of countries, and the effect is undeniable. At what point does income and/or wealth inequality slow growth? Like an excess of debt it’s hard to say, but the two taken together lead to a compelling argument that the search for sustainable, meaningful growth is a strongly bipartisan, left and right issue – and something we should get moving on as a priority.

First, the new data, which was based on information compiled by the Census Bureau. The gains among the top 7% were propelled by the rise in the stock market from 2009-2011, while the losses by everyone else came largely from loss of home value. There’s reason to believe the situation is getting better, if slowly. But it is impossible for anyone to look at this and not see something like a revolution coming.

The share of total national wealth controlled by the top 7% rose from 56% to 63%. While there’s never any magic number that tells us where a tipping point is, the word “Dickensian” starts to seem reasonable.

While this simply seems unfair and politically dangerous, there is reason beyond promoting revolt that the wealthy should be worried. As we have reported here before, the distribution of income is far more heavily skewed to the wealthy than most people believe already. But across many nations with many different experiences inequality clearly limits economic growth.

A 2011 report by the International Monetary Fund (IMF) shows this clearly. While inequality does not seem to directly affect economic growth in absolute terms, it is one of the strongest factors for creating sustainable economic growth. What has held undeveloped and developing nations back over the years has not been a lack of growth. But it often collapses in just a few years, such as what is happening now with Brazil’s “Chicken Flight” economy (which flies like a hen).

How does that square here in the US? Below is a murky graph that combines way too much information, but the trends are best shown together. In blue is the quarterly growth of US GDP since 1968. In red is the Gini Coeficient, a measure of inequality where 0.0 would be perfectly equal income (everyone the same) and 1.0 is perfectly unequal (one person gets it all). 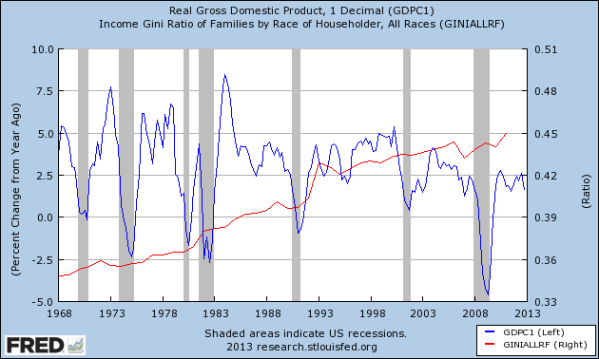 1968 marked an inflection point in the Gini Coeficient, which as you can see has trended solidly upwards (towards inequality) since. In that time GDP has bounced up and down quite a lot over the years – but appears to be generally trending down since 1980. It certainly appears that we are generating less sustainable growth since the trend toward inequality started.

This is perfectly reasonable if you think about it. We have been a middle class consumer economy for at least as long as the term on this graph, which is to say driven by spending. As we have seen through the recovery phase of this Depression, job growth has led GDP growth in a way that is at least unusual. This is shown even more clearly in Canada, a nation that stands as an outlier in that it has had decent economic growth but low productivity growth and a relatively high load of debt. A study there shows that jobs, not productivity, are the key to sustained growth.

Which gets us back to the issue of debt, the other thing that we know can choke off growth at some point. The Canadian experience is literally one of the points that brought down Reinhart and Rogoff’s 2010 paper, as reported before. Just like inequality, there is no magic number – but a high level of debt service is a big drain as money flows towards the banks and wealthy people that lent it in the first place. That has a net effect of transferring wealth to those who already have it – increasing inequality.

They become the same issue at some point.

But what this points towards is a very bipartisan agreement that debt needs to be reduced – both public and private – while methods of growing equity need to be pursued. One of the key ways of improving equality has always been infrastructure development, something that often allows equal access to markets, among other effects. When there is a need to run a deficit, having one that is a clear investment is very different from borrowing money to make payroll.

While there is a big public outcry from one side about debt, narrowly focusing on public debt only, there is no corresponding push from the other side for greater equity and investment in the economy. That’s the compromise that we can, and should be working towards – a bipartisan agenda for sustainable growth.