In his inaugural speech, New York Mayor Bill de Blasio returned constantly to the theme of “A Tale of Two Cities”. New York is big enough to be both of them at once – one a poor city where people barely get by and another that is wealthy beyond the imagination of most people. But it isn’t just his city that de Blasio wants to fix. “This inequality problem bedevils the entire country,” he intoned. “But it is not just a moral outrage, it is a horrible constraint on economic growth and on giving people the security they need to tackle problems.”

So starts 2014, the year when inequality is certain to be the big social, political, and economic issue. That is a given because after many years of intellectual stagnation the Democrats have a popular issue that they can run with. Where did it come from? A lot of credit has to go to a short video published in November 2012 that still lights up social media. And the reaction to it shows how far we have to go in order to tackle the problems of inequality.

After all, it’s not a matter of policy – inequality is a feature of the system we have.

Barataria first reported on this video in March 2013, when it became clear that this was going to keep circulating in social media. To this day it shows up periodically, and the reaction breaks down along three important lines. Younger progressives blame George W Bush (and the tax cuts of the 2000s), older progressives blame Reagan, and conservatives rarely say anything at all. When pushed, many conservatives like to point to graphs showing that workforce participation is down from a high of 67% of the civilian labor force to just 63% today, crediting the problem of rising poverty to the Obama administration when people stopped looking for work.

The two seem utterly different, as if the two sides are talking past each other, as usual. But the two pieces of data are indeed closely related. And it is not a matter of policy.

We’ll start with the chart Barataria first used in May 2013 which combines both the workforce participation rate in blue and the GINI index in red. You can find more about what the GINI index is by reading the original piece or through this detailed explanation, but it is the most valid statistical way of looking at income inequality. Higher GINI means higher inequality. Here is the original chart: 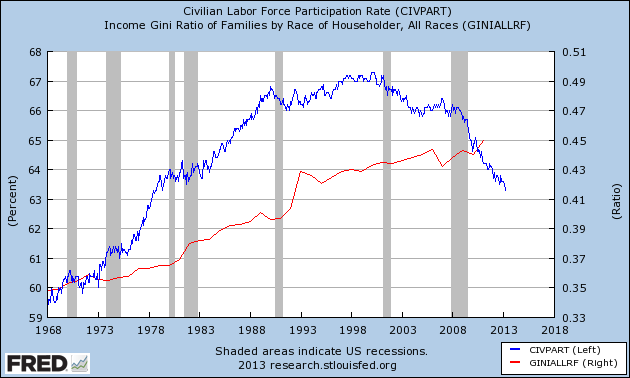 To illustrate the problem, it may be best to take a step back showing just the workforce participation rate from 1948 on, which is as far back as the data goes: 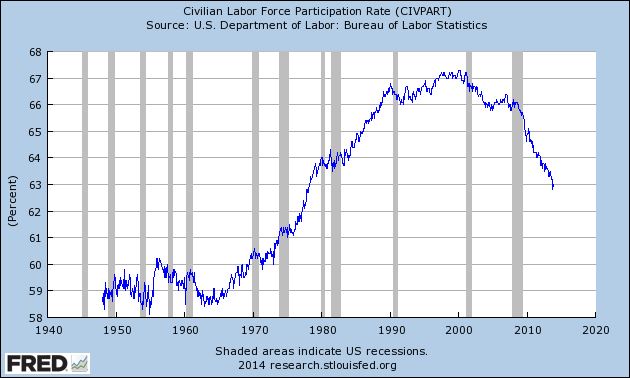 Note that we never had more than 60% of the people over 16 who were eligible (that is, not in jail or another institution) before 1968. That was the year that Baby Boomer started entering the workforce and the working adult population became very young. Women entered the workforce in numbers not seen before, and as those younger than them started working the participation rate kept climbing. It hit a high of 67% as recently as 2000 before falling to the 63% it’s at today – still much higher than from 1948-1968.

If the GINI index doesn’t work for you, here’s another way to look at workers and wages. Productivity gains have been rather constant since 1948, but until 1968 workers’ salaries increased along with that productivity. Since that time, they haven’t. You can’t blame Bush or Reagan for this as a matter of policy, given that the problem is as old as it is. 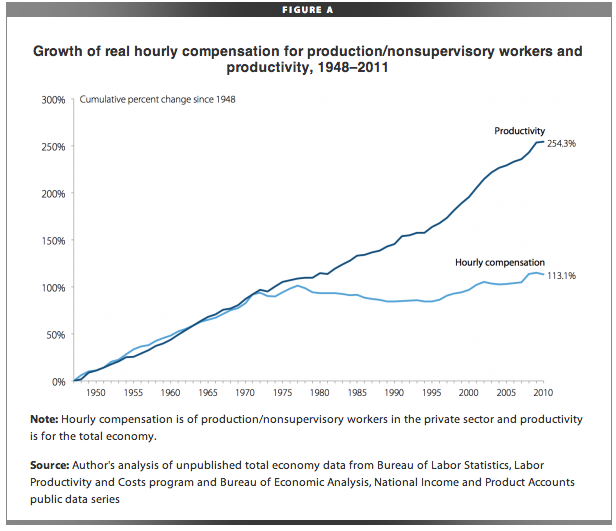 So what caused income inequality? It’s a matter of supply and demand. Baby Boomers entering the workforce in huge numbers meant there were more workers than ever before. As more kept hitting 18 years old up until 1982 the workforce kept expanding. More workers means that it’s easier to replace any given one of them – meaning that if you don’t like the lower wages where are ya gonna go? And there has been downward pressure on wages ever since.

Naturally, there could have been a positive public policy that attempted to reverse this problem. But there wasn’t. Policy has been essentially neutral, even ignorant of the problem of rising inequality for 45 years. This is not something deliberately created to keep the working class down – it seems unlikely that the wealthy have thought about working people long enough to care one way or the other.

Inequality, as we know it, was the natural result of the system we have.

Now that the workforce participation rate is falling as Baby Boomers retire, kids are staying in college longer, and some parents are staying home with their kids (in the order of importance) what can we say about the future? The St Louis Federal Reserve published a paper on this topic that shows that we are indeed returning to a time when about 60% or less of the potential working adults will be in the labor force: 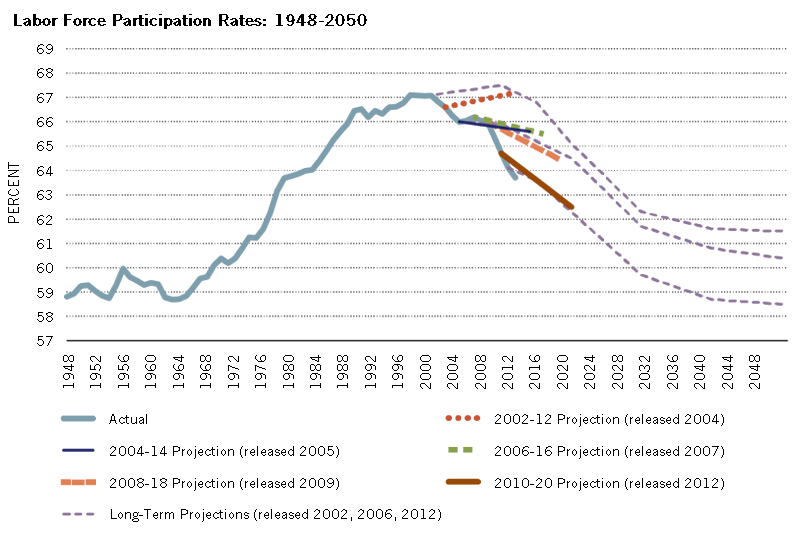 Sometime in the 2020s we will again be at 60% participation rate and there will be upward pressure on wages again. The problem should largely correct itself – but there’s at least one big catch. Instead of having only one “breadwinner” per family, we will be in an economy where some families are unemployed and relying on Social Security and other retirement funds. Policy will have to play a role – and an intelligent policy can bring income inequality back to a reasonable level much more quickly.

How important is it to be under 60% workforce participation? Given that the Civilian Labor Force is about 155M people, 67% participation (the peak) is about 10.9M more people working. That’s almost exactly the number of officially unemployed by the headline rate of 7% today. 3% of that workforce, or the difference between today’s 63% and the postwar levels, is about 4.6M people – meaning that the official “unemployment rate” would be at 4% today. It makes a big difference.

That’s why Barataria calls 2017, the year Baby Boomers start retiring in droves, “The Year Everything Changes”.

Yet income inequality has been growing for a long time and it won’t turn around without some serious action. It’s worth tackling as a matter of policy even if demographics are on our side. But to really solve it we have to start by being honest with ourselves about the cause of it.

There is no one to blame, except everybody. Income inequality is a feature of our system. Changing it is going to require a lot more attention to details and quite a bit more honesty than we’ve had in our political system in 45 years. Progressives, you want to change the situation? Let’s do it, but don’t look for a quick fix. This is a very big problem we’ve been ignoring for a very long time.

If you want to know more on a particular topic, follow the links. Thanks!