We are living in a society that is so unequal that we could solve much of our federal deficit problem by returning to the top tax rate under President Clinton (39.6%) for only those individuals earning more than $5 million a year. If we also taxed much of the sheltered capital gains income as if it were the same as wages, we would come even closer to solving the debt problem.

Recent news from the census reveals that inequality among whites and black and Hispanic Americans has increased dramatically since the financial meltdown began in 2008. According to a recent report in the Star Tribune, “The median wealth of white U.S. households in 2009 was $113,149, compared with $6,325 for Hispanics and $5,677 for blacks, according to the analysis released Tuesday by the Pew Research Center. Those ratios, roughly 20:1 for blacks and 18:1 for Hispanics, far exceed the mark of 7:1 for both groups reached in 1995….”

This distribution of wealth includes the value of one’s home, if we calculate financial wealth, or money in the bank, the numbers are even starker. Consider this: 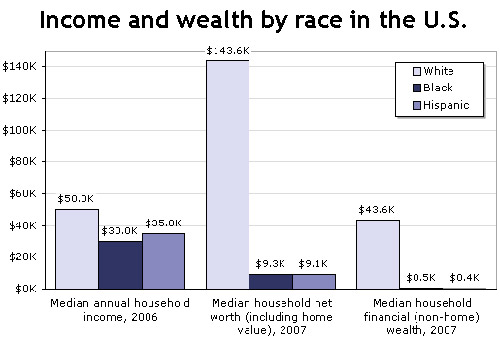 We live in a massively unequal nation and it is getting more unequal all the time. In 2007, before things got worse, half of all black households had less than $500 in the bank or retirement accounts and Hispanics less than $400. It took generations for one half of the white working class to amass even as little as $43 thousand in non-home wealth, and for blacks and Hispanics, generations of discrimination have led to very little savings for many.

When we think about public policy and the redistribution of wealth, more often than not we think about laws that move money from the wealthy to those less fortunate. What we have seen over the last 30 years is a conscious policy of low taxes and the gutting of government that has caused wealth to migrate from the working class to the wealthy. 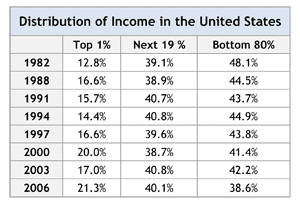 We must stop this redistributive policy of giving to the rich and taking from the poor. Cutting budgets and lowering tax rates for high income earners does not lead to job creation or freedom. Rather, it creates a tiny class of people with more money than they can ever spend and masses people with neither income nor saving to live a decent life.