Legislative negotiators have agreed to raise Minnesota’s minimum wage to $9.50 per hour, but remain at an impasse over the subject of indexing the wage in future years so that it keeps pace with the cost of living. Yesterday’s Minnesota 2020 article contended that the principle arguments in opposition to indexing were baseless. To further bolster the case for indexing, new projections indicate that growth in an indexed minimum wage will be modest.

First, some background. Under House File (HF) 92 (fourth engrossment), the $9.50 minimum wage would be adjusted in future years for increases in the cost of living as measured by the Consumer Price Index (CPI), not to exceed 2.5% annually. This is the legislation preferred by minimum wage advocates.

A recent Hindsight post noted that “If inflation over the next 10 years resembles inflation over the last decade, the minimum wage under the current proposal will grow by $1.93 per hour.” However, newly available CPI projections indicate that the annual rate of CPI growth over the next several years is expected to be less than it was over the last decade. As a result, the minimum wage under HF 92 is projected to grow from $9.50 in 2016 to $11.07 in 2024—an increase of just $1.57 over eight years. (This assumes that that all implementation dates currently in HF 92 would be delayed by one year, as discussed by legislative negotiators.) 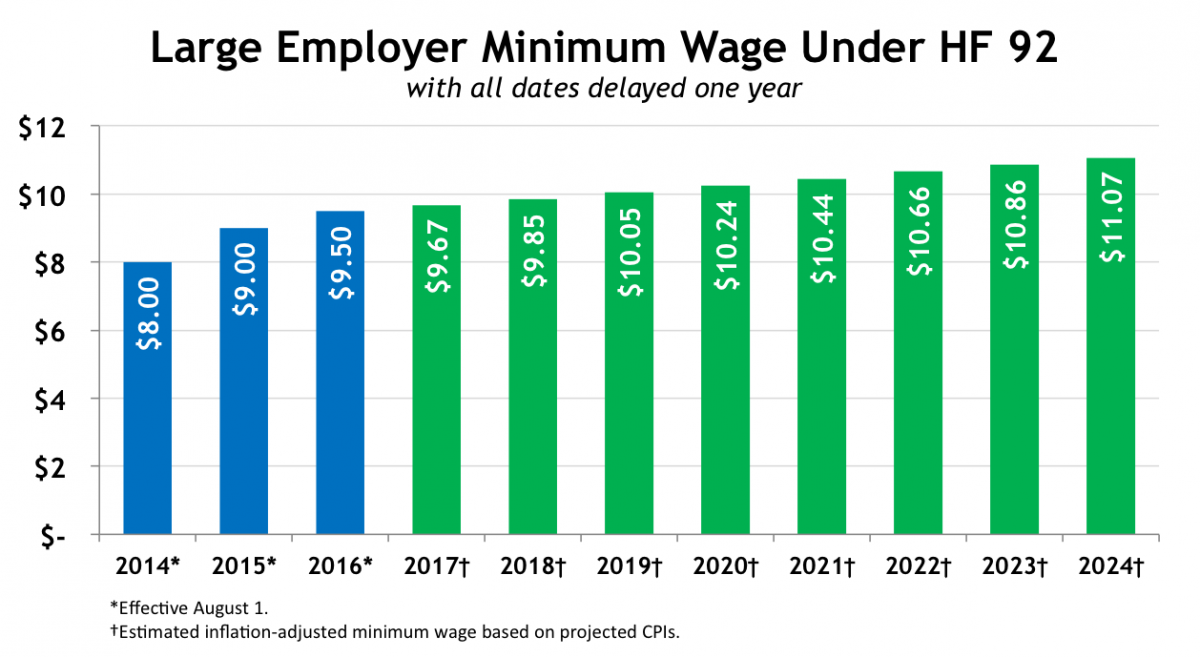 Of course, these minimum wage estimates are based on CPI projections which could overstate or understate the level of inflation over the next several years. Let’s assume a worst case scenario, in which the CPI grows by ten percent every year for the foreseeable future. Even under these conditions, the minimum wage under HF 92 would grow by just $2.08 from 2016 to 2024 because of the annual 2.5 percent cap in minimum wage growth. Under this scenario, 80 percent of the effects of inflation would be borne low-wage workers in the form of declining minimum wage purchasing power, while only 20 percent would be borne by employers.

Based on the best CPI projections currently available, the impact of the indexing in HF 92 is modest, resulting in an average minimum wage increase of less than 20 cents per year from 2016 to 2024. Even if inflation turns out to be much higher than expected, most of the impact will be borne by low-wage workers, not businesses. By virtue of the 2.5 percent cap, the minimum wage indexing in HF 92 is already accommodating any legitimate business concerns. For the sake of the financial security of Minnesota’s most vulnerable workers, the indexing in HF 92 should not be further watered-down or compromised away.