One of the outstanding issues in current legislative negotiations over the minimum wage involves “indexing,” which refers to the practice of annually adjusting the minimum wage so that it keeps pace with inflation. Without annual inflation indexing, the value of a $9.50 per hour minimum wage will erode over time as the purchasing power of the dollar declines.

This will not only be bad for low-wage workers who will see their real wages shrink from year to year, but will create periodic political pressure for another minimum wage increase in future years. Indexing the minimum wage to inflation is a common sense way to take politics out of future minimum wage discussions by linking growth in the wage to growth in the cost of items that families need to purchase.

The Consumer Price Index (CPI) measures changes in the price of the market basket of consumer goods and services purchased by the typical household. It makes sense to index Minnesota’s minimum wage based on growth in the CPI to ensure that the wage will keep pace with the cost of living in future years.

Indexing the minimum wage for inflation will also provide predictability and stability for businesses, as employers will have a reasonable idea as to what future wage costs will be, since growth in the minimum wage will be determined by the rate of CPI inflation and not by the vagaries of the legislative process.

Average annual growth in CPI inflation has been two percent for the last several years (2010-2013) and is expected to average less than two percent for the next four years (2014-2017) based on IHS Global Insight projections. Under House File (HF) 92, the state minimum wage would increase only modestly in 2016 and 2017 based on these CPI projections. 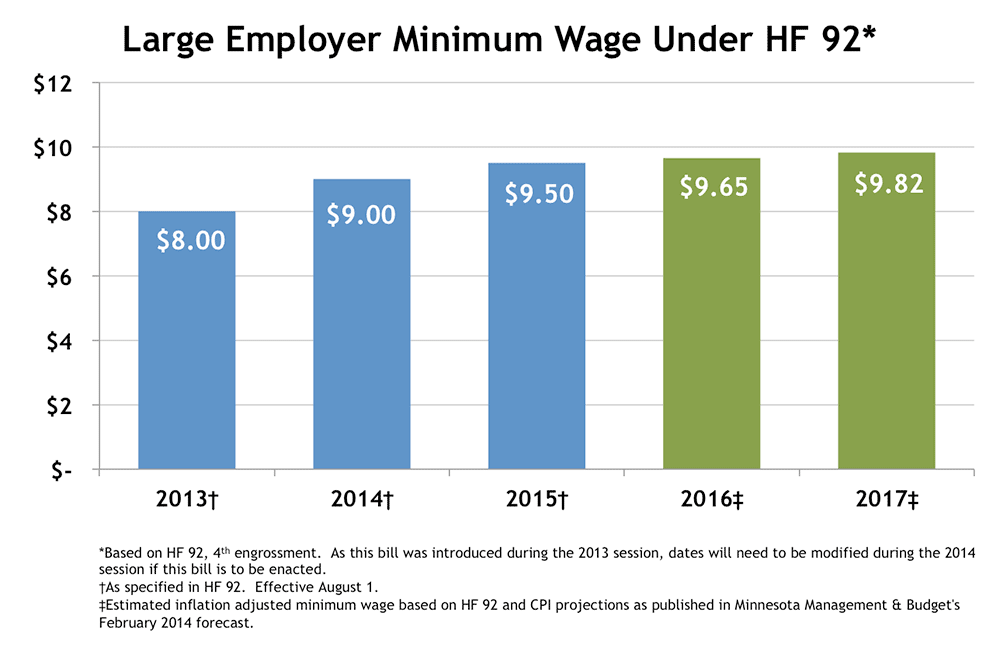 The hourly large employer minimum wage would increase by an estimated 15 cents and 17 cents respectively (less for small employers) during the first two years that the HF 92 inflation indexing would be in effect, based on estimates derived using IHS Global Insight CPI projections. Even if the rate of inflation were to increase in future years, HF 92 would cap the annual minimum wage increase to 2.5 percent.

Indexing the minimum wage will protect the earnings of low-wage workers from inflation, take the politics out the determination of the minimum wage in future years, and provide stability and predictability for Minnesota businesses. Minnesota should join eleven other states in adopting this common sense approach during the 2014 session.