Bryant Lake Bowl is a locally owned business and a member of the Metro Independent Business Alliance. (Photo courtesy of Kelly Povo)

There’s still time to visit metro area independent retailers and enter to win $1,250 in gift cards, a $50 card from each of 25 participating business. That’s the promotion for “Celebrate Your Independents Month,” an event organized by the Metro Independent Business Alliance, a nonprofit working to support locally-owned, independent businesses in the Twin Cities region by educating the public and influencing public policy. Pick up or print out a brochure—featuring discounts from each retailer—have it stamped when you stop at a store or restaurant, and you’ll be entered into the drawing. The more businesses one visits, the greater their chance of winning the grand prize. Last year Maureen Heinen, a MetroIBA member who runs a home and office organizing service, Send in Maureen, visited all 25. She’s vowed to do the same again.

FULL DISCLOSURE: As a MetroIBA/BuyLocalMN partner, the TC Daily Planet publishes business pages for each IBA member in our community directory.

This marks the eighth year of “Independents Week,” a creation of the American Independent Business Alliance (AMIBA). The Twin Cities affiliate is among a handful, nationally, that have stretched the celebration into a month-long event. For the first time ever, the United Kingdom has designated this July “Independent Retailer Month,” thereby turning this into a global campaign to heighten awareness about independent businesses’ contributions to local life and economies.

Mary Hamel, MetroIBA’s executive director, explains that the organization decided last year that one week scheduled around a busy holiday was not sufficient. “At least in Minnesota, there are too many people out of town for the Fourth and on summer weekends,” she says. So MetroIBA’s marketing committee proposed a “Celebrate Your Independents Month,” better to ensure that the efforts involved in planning and promoting the event paid off. It then selected 25 retailers to participate. 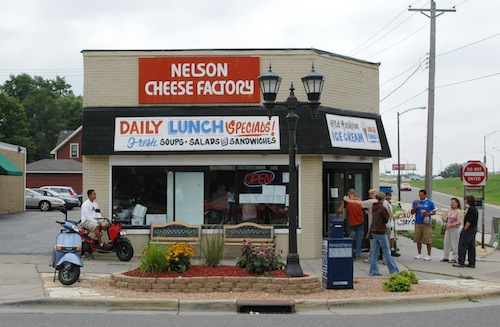 Nelson Cheese Factory is one of the Metro Independent Business Alliance members participating in “Celebrate Your Independents Month.” (Photo courtesy of Kelly Povo)﻿

This year, 19 of the 25 businesses are taking part again. One of the main advantages of so many returnees, says Hamel, is that they’ve “hit the ground running.” Some went a step or two further, providing thorough staff trainings, or encouraging shoppers to stop at other participating venues.

The purposes of Celebrate Your Independents Month are two-fold. One, says Hamel, is to drive traffic to local independent retailers during a typically slow time of the year. The other is to grab media attention, to educate the public on reasons to support independent businesses. On both counts, she reports, MetroIBA has been more successful this year, than last. A big boost came when MetroIBA member, Nemer Fieger, a public relations firm, contacted a local television station. Soon, all of the stations were providing coverage, some more than once. That’s in contrast to last year, when only one local outlet covered the story. Print coverage has increased, too.

Why? “Independent local businesses employ an array of supporting services….In contrast, a new chain store typically is a clone of other units, eliminates the need for local planning, and uses a minimum of local goods and services. A company-owned store’s profits promptly are exported to corporate headquarters.”

Julie Warner, marketing assistant for St. Paul-based Warners’ Stellian Appliance Co., observes that locally-owned stores, “are the retailers, restaurants and service providers that lend support to your children’s schools, your places of worship and our neediest nonprofits because it’s their communities, too.”

Community character or sense of place is another of the great contributions of independent businesses, according to the U.K. campaign. “These independent retailers provide the local flavor and color to a community. Imagine how tasteless it would be to travel around the country where each community had the same businesses as the next community.” The same might be said of our daily travels through Minneapolis and St. Paul neighborhoods, according to MetroIBA.

Meanwhile, Jeff Warner, president of Warners’ Stellian and MetroIBA’s board, contends that people should choose to patronize local businesses because they recognize the quality being offered is above and beyond that of national chains.

And price? Stacy Mitchell, author of Big-Box Swindle, and a researcher for the Minneapolis and DC-based Institute for Local Self-Reliance (ILSR), says that supporting locally owned businesses does not necessarily mean paying more. “You might be surprised to learn that Consumer Reports conducted a nationwide survey of appliance prices…and reported that the best place to buy was not Home Depot, Costco, Best Buy, or even Wal-Mart. The lowest prices were offered by independent appliance dealers. Similar studies of hardware stores and pharmacies have likewise found that independents often match or even beat chain store pricing.” This is because many independent retailers now belong to wholesale buying cooperatives, giving them access to volume efficiencies enjoyed by chains, and cut out distribution and shipping costs, a savings that will only increase as oil prices rise.

July’s promotional event is one of two major blitzes done annually by MetroIBA. The other is a “Buy Local, Buy Smart” campaign during the winter holiday season. ILSR has shown that such campaigns, now underway in 140 cities, pay off. In a press release earlier this year, it reported that, “For the fourth year in a row, a national survey of independent businesses has found that those in communities with an active ‘buy local’ campaign have experienced markedly stronger revenue growth compared to those located in areas without such a campaign.”

Hamel points out that supporting local independent businesses pays off in other ways, too. “Dollars spent are votes cast for the kind of community people want.” MetroIBA’s Celebrate Your Independents Month is just one opportunity for people to show their support and perhaps be the lucky winner of a lucrative prize.