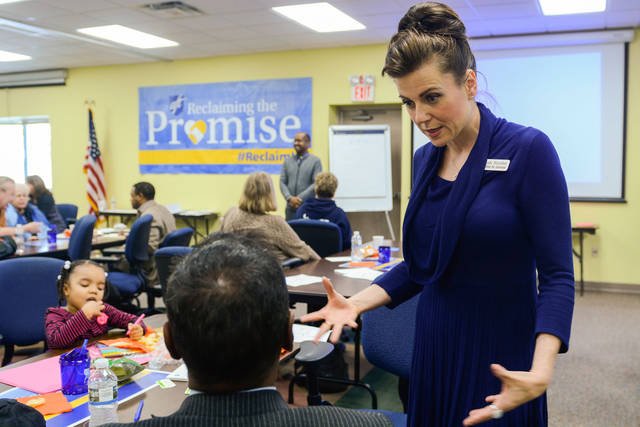 (Photo by Cora Nelson) Independence Party candidate for governor Hannah Nicollet talks to a supporter of Reclaim the Promise, a public education advocacy campaign in Minneapolis. Party candidates say their stances on issues like marijuana legalization set them apart from main-party contenders.

Minnesota’s Independence Party candidates are working collectively this election season to win votes while trying to make a third side of the aisle for nonconforming voters.

The Independence Party of Minnesota has candidates in each statewide election this year, along with congressional districts. But its focus doesn’t dwell on any one candidate in particular, which is something that candidates across the party view as one of its greatest assets.

By working to position the party as a cohesive political force that puts policy, not personality, at the forefront, candidates say they hope to renew its prominence in the state.

Tim Gieseke, the Independence Party’s endorsed candidate for lieutenant governor, describes the party’s role in November’s election as “a third space for a voter to stand in” when voters aren’t in agreement with the Republican or Democratic parties.

He said this position gives him and others in the party a broader perspective on critical topics than major parties can offer.

But the separation from the mainstream comes with its own set of challenges.

It’s hard for the party’s candidates to reach out to as many students as they’d like, Gieseke said, because they lack the financial resources and strong support base of the state’s prominent parties.

“The challenge with the Independence Party is, as a smaller base, you end up being the janitor and the president at times,” he said.

Hannah Nicollet, the Independence candidate for governor, said many students’ perspectives on topics like marijuana legalization and same-sex marriage align with those of the party, so she hasn’t actively campaigned on campus.

“We’re able to advance issues that haven’t become mainstream just yet,” Nicollet said, noting that the Independence Party was one of the first to adopt a full marijuana legalization platform last June.

Brandan Borgos, the party’s endorsed candidate for attorney general, agreed that the Independence Party leaves room for tackling issues with which major parties may not want to affiliate.

“It’s pretty clear that our politics take a spearheading effort on things that are issues that, frankly, the other campaigns won’t touch,” Borgos said. “We did it with the marriage bill, we did it with the voter ID [amendment], and, of course, now we’ve done it with cannabis policy.”

He said he views his party as an insurance policy for the state when traditional parties are considered too ineffective to lead.

There are both Republicans and Democrats who share sentiments with the Independence Party, Borgos said, but they may be too paralyzed by the institutionalized nature of their parties to take strong stances.

“It really matters to make sure that there are more voices and more options,” Borgos said, because in the current two-party system, people are voting on the party rather than the issues.

But Tom Horner, last cycle’s Independence candidate for governor, said the party shouldn’t confine itself to one issue, like marijuana legalization.

“My aspiration is that [the] Independence Party continues to be a part of Minnesota politics, part of the discussion,” he said.