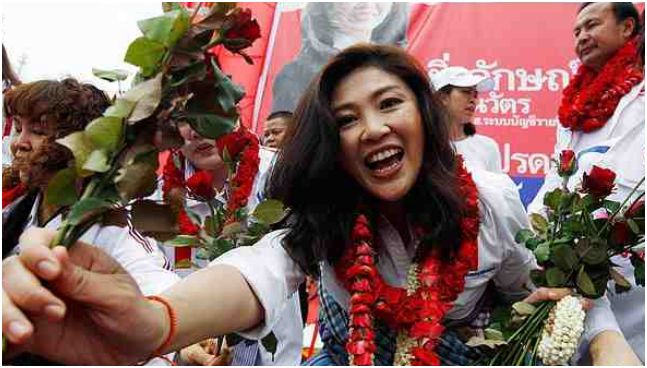 On Sunday, July 3﻿ something truly remarkable happened in Thailand. The country woke up a venerable patriarchy and went to bed having elected the first female Prime Minister in the nation’s history.

Her name is Yingluck Shinawatra. A 44-year-old business executive turned political novice, she was lead candidate of the Pheu Thai Party, which won at least 266 seats in the Thai parliament, or 40 more than necessary for an outright majority﻿. Pheu Thai has already announced that it is forming a coaliion with the Chaipattana Party, giving Yingluck control of more than 300 of the parliament’s 500 seats. Whatever comes of her overwhelming victory, one thing is certain: it marks an enormous advance for Thai women who are, as in most countries, the backbone of society: hardworking, intelligent, and amazingly lighthearted in the face of the enormous hardships many, if not most, of them endure.﻿

Many challenges lie ahead for her, as well as for a country that has struggled since the 1932 Revolution that overthrew the absolute monarchy and replaced it with a constitutional monarchy to become a truly functioning liberal democracy.

Not the least of the challenges will be how Yingluck (in Thailand, people are commonly referred to by their first names alone) deals with the legacy — and machinations — of her uncle, the deposed Prime Minister Thaksin Shinawatra.

Pheu Thai was formed out of the ashes of the People Power Party, which itself was formed out the ashes of the Thai Rak Thai Party, which was founded by Thaksin, a Foreign Minister of Thailand in the mid-90s and a billionaire telecommunications magnate. Thaksin currently resides in self-imposed exile, a fugitive from a two-year prison term for corruption handed down after the military coup  that ousted him in 2006.

Thaksin is, at one and the same time, Yingluck’s lucky amulet and potential demon haunting her spirit house. There is no question that she would not have been chosen as Pheu Thai’s lead candidate if it were not for the family connection. At the same time, she now must follow through on her pledge to serve as leader of the whole country, and not just as Thaksin’s puppet.

It is clear that he, at least, expects her to do his bidding. On the other hand, she has the mandate of the people now — not him. She achieved that by winning support even from those who despise her uncle. And she did it by energizing the electorate — particularly Thai women.

Still, she is going to face a real power struggle within her own party between Thaksin loyalists and those who want to move the country forward behind her.

A thoroughly bad actor, Thaksin was Thailand’s answer to Silvio Berlusconi and Juan Peron, an elected authoritarian and illiberal democrat whose record of corruption and conflicts-of-interest while in office pales beside his far more serious transgressions.

In addition to single-handedly wrecking Thailand’s reputation for press freedom with his heavy-handed assaults on news outlets that dared question his policies and behavior, he was also responsible for ordering as many as 2,500 extra-judicial killings — assassinations — of putative drug traffickers during the War on Drugs he declared with much fanfare in 2004.

Human Rights Watch estimates that at least half of those murdered by authorities had nothing to do with drug trafficking (not that executing drug traffickers without due process is justified). The suspicion is that these unfortunate victims were eliminated for things like opposing Thaksin-backed policies designed to enrich himself and his cronies.

He also prosecuted a brutal and ultimately counterproductive military offensive against insurgents and dissidents in the largely Muslim regions of southern Thailand. The most infamous incident during this campaign culminated in the negligent homicide of 120 demonstrators detained by authorities and literally stacked in military trucks where the detainees suffocated in the tropical heat.

Thaksin has not made Yingluck’s road any easier by declaring that his niece, whom he insists on referring to as his younger sister, is his “clone,” and by loudly proclaiming that her election will mean amnesty for him and his triumphal return to Thailand.

This prospect has already raised the spectre of yet another military coup — the 20th (which, for those of you interested in sending a gift﻿, is either the Silver or the Porcelain Coup — it’s hard to keep track) since 1932. There are many top military officials who fear what might happen should Thaksin return, some because they helped kick him out of office, others because they were complicit in the drug war killings and counterinsurgency atrocities, none of which has ever been investigated despite official promises to do so.

Even so, while some segments of the Thai public are very gloomy over the Pheu Thai victory, most of the population is at least quietly elated. During the course of the two-month campaign that followed Interim Prime Minister Abhisit Vejjijiva’s abrupt decision to dissolve parliament and call snap elections, Yingluck initially stumbled but soon found her footing, blossoming into a charismatic figure and gifted public orator — still an important attribute in Thai politics.

Non-partisan individuals who have worked with her over the years also testify that, unlike her uncle and his truculent my-way-or-the-highway approach (one of his nicknames here is Little Big Man — and Thaksin does seem to have a classic little man complex), Yingluck leads by consensus, making sure that all stakeholders end up feeling that they have been heard and their views taken into account in the final decision.

If true, and if she continues to display the poise and determination she demonstrated on the campaign trail, where she easily outclassed her principal opponent, the technocrat Abhisit, and his party’s shamful attempt to hold her personally responsible for deadly rioting last year by extreme elements of the Red Shirt faction formed in opposition to the 2006 coup, then she may well confound expectations — and her own evil uncle. In the end, she could help Thailand evolve from its current “Thai-style democracy,” with its rampant corruption, inefficiency, and perennial difficulty keeping the troops in the barracks, into a true liberal democracy.

For all the uncertainy right now, however, three things are undeniably true.

First, this election, which was closely monitored by teams of international observors, was free and fair. Yingluck won — and she won big.

Second, in fashioning their election victory, Yingluck and Pheu Thai built upon her uncle Thaksin’s one positive contribution to Thailand: creation of the first genuine mass democratic movement in the country’s history.

Third, and most important of all, Yingluck’s election is a watershed moment for gender equality not just in Thailand but all of Southeast Asia. She is not just Thailand’s first female Prime Minister. She is the first independent female leader of any kind in Thailand’s thousand year history. While still not exactly common, the election of women to head nations in the west is no longer a complete novelty. In Southeast Asia, however, it is on a par with electing an African-American President of the United States of America

And for that alone, we all have cause to celebrate Yingluck’s victory.

Photo of Yingluck Shinawatra on the campaign trail courtesy of AsianNews.