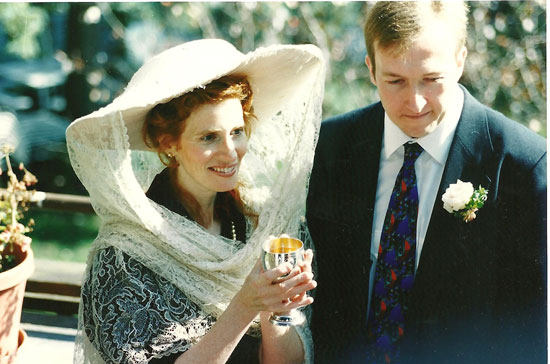 We sit on the rug in the middle of the floor and I tell him we are on a magic carpet ride. Like Aladdin, I say, we are going up, up, up, over the city, and once we are high enough, my son can say anything he wants and it will be okay! I won’t blame him for anything. We close our eyes and pretend we are flying, and we are both very good at pretending. And then my five-year-old looks at me and says exactly what he wants to say.

His father and I have been divorced almost two years and his father has gotten married. My son loves his stepmother and enjoys spending time with her. I am guessing he feels our little home is too quiet; or maybe he just wants a more traditional family at our place too. I have created these magic carpet times so he can tell me whatever’s on his mind and now he’s told me. What do I do?

“I want to get married too, Josh,” I say. “But we have to be careful. We can’t just marry anyone. We have to pick the right person. We’re a package deal, you and me, and we go together. So whoever we marry has to be in love with both of us.”

Josh looks at me nodding, and it is clear he understands. Some days later, we are in the car and he sighs. “I want you to get married,” he says. “But we have to be careful. We have to pick the right person. We can’t just marry anyone.”

I don’t know whether to laugh or cry. But it feels good to know, at least, that he was listening to me. And the truth is—I may already have found someone. He is not a Jewish man, but he is a wonderful man. I think he would be fine if we invited him into our Jewish home, and though he’s not kosher, he is vegetarian. Which is almost the same thing (right?)

My Someone is named Pete, and we were friends before we started dating. I knew early on that he liked me, but I was dealing with all sorts of marriage-ending stuff and couldn’t see straight. So it took a lot longer for me to even consider whether Pete might be The One.

If you were to ask me why I made the decision to marry him, I could say a lot of things: I was impressed by his gentleness, his humor, his genuine love for Josh and his patience with both of us. But mainly, I’d say it was because of the Indigo Girls. Pete knew I liked them, and when we first started seeing each other he asked me to go to a concert they were giving at the U. We got there only to find the concert was completely sold out. At that point, I decided the Universe was trying to tell me something; I should not be with this man.

I turned away from the box office just as a dark-haired woman entered the ticket booth. She looked directly at Pete, and I remember thinking, “She likes him.” Only instead of flirting, she asked if we were trying to see the Indigo Girls. “Yes, and you’re all sold out, “ I said impatiently. And then, in what must be the start of some movie script somewhere, the woman smiled the most impish smile I’ve ever seen and motioned us to come closer. That night, Pete and I had front row seats at the Indigo Girls.

So much for the Universe.

One year later, Pete proposed, and I said yes to him. But I still had one more hurdle and no idea how to tackle it. How do you create a wedding ceremony without a rabbi that honors your heritage, when you’re not getting married to a Jew?

The wedding was planned for the middle of Sukkot, with a civil judge officiating. I knew we would have no Hebrew and no broken glass. But I wanted Josh and everyone else to know we would still keep our traditions, and that Pete was going to be part of them too. I talked to the judge about the holiday, and she said she’d think about it and get back to me.

On the morning of our wedding, Pete and I faced each other on the balcony of the University Club in St. Paul. The judge compared our marriage to a sukkah.

“It is not permanent, but it is the promise of a home,” she said.”Its openness pledges that there will be no secrets. The sukkah does not promise that love or hope or pledges will keep out weather or catastrophe, but its lines are a sketch for what might be. You have come together to celebrate your future together, the making of a home. We are reminded that the only thing that is real about a home is the people in it, who love and choose to be together, to be a family. So may it be for you now.”

After the ceremony, we celebrated with Challah and said the Motzi blessing. And though it was not by any stretch a Jewish wedding, I think the imagery of the sukkah has stayed with us throughout the years we’ve been together. I think Josh would also tell you he was raised Jewishly, in a Jewish home.

What this means for you and whatever weddings you may encounter I don’t know. I’m not recommending you do what I did; in fact, I think it’s easier for Jews to marry other Jews because we are a minority culture in a not-always-hospitable world. But I do believe it’s possible to bring your traditions with you wherever you go and to live them. And if you can manage to pick the right person, the Universe has a way of responding—putting you up front and center with life—and maybe even the Indigo Girls.

Contributing writer Jenna Zark is a local Jewish playwright whose plays have been produced at Circle Repertory Company, Illusion Theater, History Theatre, Minnesota Jewish Theatre, Blank Slate and elsewhere. Jenna has also written for Minnesota Bride, Woodbury Magazine and other publications, and her poem “After Birth” recently appeared in Stoneboat. More information is at www.jennazark.org.