What happens when economies of scale are taken to ridiculous proportions? The wretched customer service of Comcast, AT&T, Etc.

We recently had to move our Institute for Local Self-Reliance office within Minneapolis due to our old building being razed shortly for student condos. Given the paucity of choices, we are stuck with Comcast as our ISP (the other option is a slower, less reliable CenturyLink DSL connection).

Dealing with Comcast for the move has been a reminder why communities are smart to build their own networks. They can ensure a much better customer experience because they are not so unmanageably large. In telecommunications, some scale is desirable because key costs are somewhat fixed. Regardless of how many subscribers a network has, it has to advertise, do tech support, keep the network functioning, and more. Spreading those costs across a wide base makes sense.

But when you take it to the levels of national carriers, you end up with customers having to call India to talk to a living human. After enough complaints, some of those jobs have come back to the US, but customer satisfaction remains elusive because of the difficulty of managing tens of millions of customers on probably hundreds of different internal systems — most of which do not talk to each other.

To ensure continuity of service for our office, we installed business-class service at our new location before we moved. We were told that on the day of the move, we could switch our static IP from the old location to the new with just our account number and the MAC address of the Comcast modem already installed in the new location. 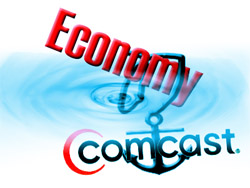 The Customer Service Rep could not tell me the new account number. I asked if he could find it with several different pieces of unique information I did have and was told no. It was not possible.

Frustrated, I said, “screw it,” and just plugged old Comcast modem into the network, wondering if it would magically work with the correct static IP. And Lo, we were back on the Internets. All of them. Problem temporarily solved.

Of course, because Comcast’s network is a last-generation cable product, it shares bandwidth among many users. We often achieved something close to the advertised speeds at our old location but our new location must be more heavily oversubscribed because the connection is noticeably slower.

After settling in, we called Comcast to figure out what equipment to send back to them and make sure we were only being charged at the new location.

Of course, if they had actually terminated our new service, we would not have been able to call them over our VoIP phones, so we were reasonably sure they just had no idea what they were doing. As a side note, we originally tried to use Comcast VoIP service, but the lag was so terrible and their service so miserable, we switched to an independent VoIP company that does a much better job.

While they were trying to figure out how many ways they had screwed up (keeping us on hold for over 30 minutes), their network hiccuped and we lost the call. So we called back. They eventually got their act together enough to tell us we had to change the modem configuration, which resulted in lost connectivity briefly.

When it came back on, the modem worked but our router did not. It took another hour of us troubleshooting what the Comcast CSR had told us before it all worked again. For now. We are honestly expecting to show up for work soon to find no Internet connectivity and a note from Comcast saying that they transferred our service to someplace in Florida. 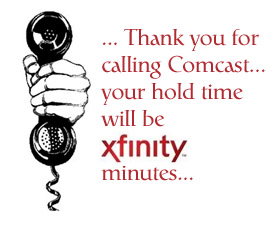 Update: Sure enough, they shut down our service the day after I wrote this. In the midst of a staff meeting we were doing over Skype, we lost our connection. After a few minutes isolating the problem to Comcast’s network, we called them. They informed us that we hadn’t paid our bill by its due date. Again, we were confused because our bill was due on Oct 28th … does Comcast employ precogs now? (If you don’t get it, start reading Philip K Dick or watch Minority Report.)

Apparently Comcast’s accounting system reset our bill due date to IMMEDIATELY NOW and shut down our service after noticing it hadn’t been paid. Not that they bothered to notify us in any way. But after getting someone on the phone at Comcast, they were able to work it out. We only lost about 1 hour of staff time between two people – way below average when dealing with this wretched company.

In trying to sort through it all, we realized we have received three different bills over the past two weeks and though the lovely CSR suggested we had a credit on our old account, we cannot find evidence of that anywhere. No worries, we’ll just waste more staff time trying to sort out Comcast’s mess from what should have been a simple move.

Throughout it all, the Comcast customer representatives have been very helpful – much like I imagine demons in hell might be. “Oh, we are very sorry, but management policy is for you to burn for all eternity. I wish there was something I could do about it, but I just work here. Can I help you in any other way?”

So why are communities smart to build their own networks? Because they can make sure local businesses, residents, and nonprofit organizations don’t have to depend on this kind of pathetic service.