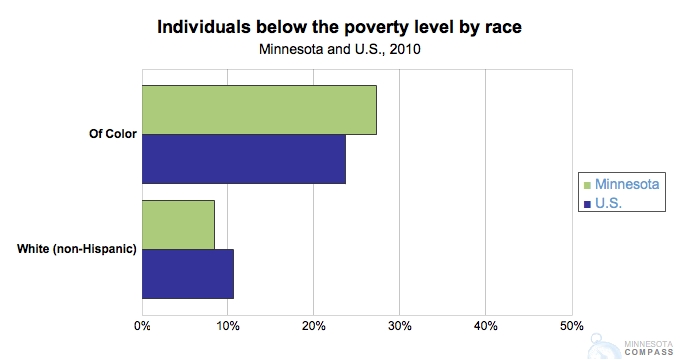 The Challenge: Numerous studies show that a huge racial equity gap impacts nearly every realm of life, including: levels of education, incarceration, unemployment, income, net worth/wealth, mortality, and health. Minnesota Compass notes that people of color comprise the fastest growing segment of the state’s population so will be an increasingly large part of the workforce. Yet, it’s this segment that’s most likely to live in poverty and suffer from chronic illnesses, and least likely to graduate from high school or own a home. Indications are that inequality is only getting worse.

B: Change the culture to institute necessary economic reforms—Educate the public, focus on the common good, get the vote out, pave the way for reforms, such as changes to the tax system and increased government funding for jobs and education programs.

Last May, in an article entitled “Of the 1 percent, by the 1 percent, for the 1 percent,” Nobel Prize-winning economist Joseph Stiglitz wrote that, “All the growth in recent decades—and more—has gone to those at the top.” He explained, “Much of today’s inequality is due to manipulation of the financial system, enabled by changes in the rules that have been bought and paid for by the financial industry itself….”

In July, religious leaders in Minnesota drafted a letter to the governor and legislative leaders noting that the state’s racial equity gap has become one of the worst in the nation. They said it was unconscionable for so many to be threatened with foreclosure of their homes, and be faced with legislation that would harm efforts to close the racial equity gap in schools, and defund the transit systems that poorer residents, in particular, rely on.

Unemployment. The recession has hit people of color the hardest. In 2009, 36 percent of the state’s black population and 41 percent of Hispanics were unemployed or underemployed for at least part of the year. For Minnesotans under age 35, blacks without a high school diploma had an unemployment rate of 59 percent in 2009, nearly triple the 22 percent rate for whites without a diploma. In Minneapolis, 40 percent of residents are people of color, yet only 17 percent of jobs are filled by people of color.

Education. White students in Minnesota have consistently performed in the top 10-15 percent nationally on the National Assessment for Education Progress. The gap between the state’s white and black students on that exam is the second largest in the country. Statewide, 82 percent of white students graduate from high school, compared with 44 percent of African American students. A report by the African American Leadership Forum notes that African American students are the majority in some school districts, and that the state’s economy depends on their success in school.

Home Ownership. While over 63 percent of whites own homes in the Twin Cities, only 23 percent of blacks in Minneapolis and 26.4 percent in St. Paul are home owners. Low incomes and lack of assets affect a person’s ability to save for the future and build financial security.

Life Expectancy. Each additional $10,000 in an area’s median household income is associated with a full year gain in life expectancy. Children born into the highest income neighborhoods live eight years longer than those born into the area’s poorest communities.

By 2030, one-quarter of Minnesota’s population will be people of color, up from 9 percent in 2000 and 14.9 percent in 2010. That population growth will center largely in the suburbs and Greater Minnesota, not the urban areas of Minneapolis and St. Paul.

The case for option A: Organize and strategize 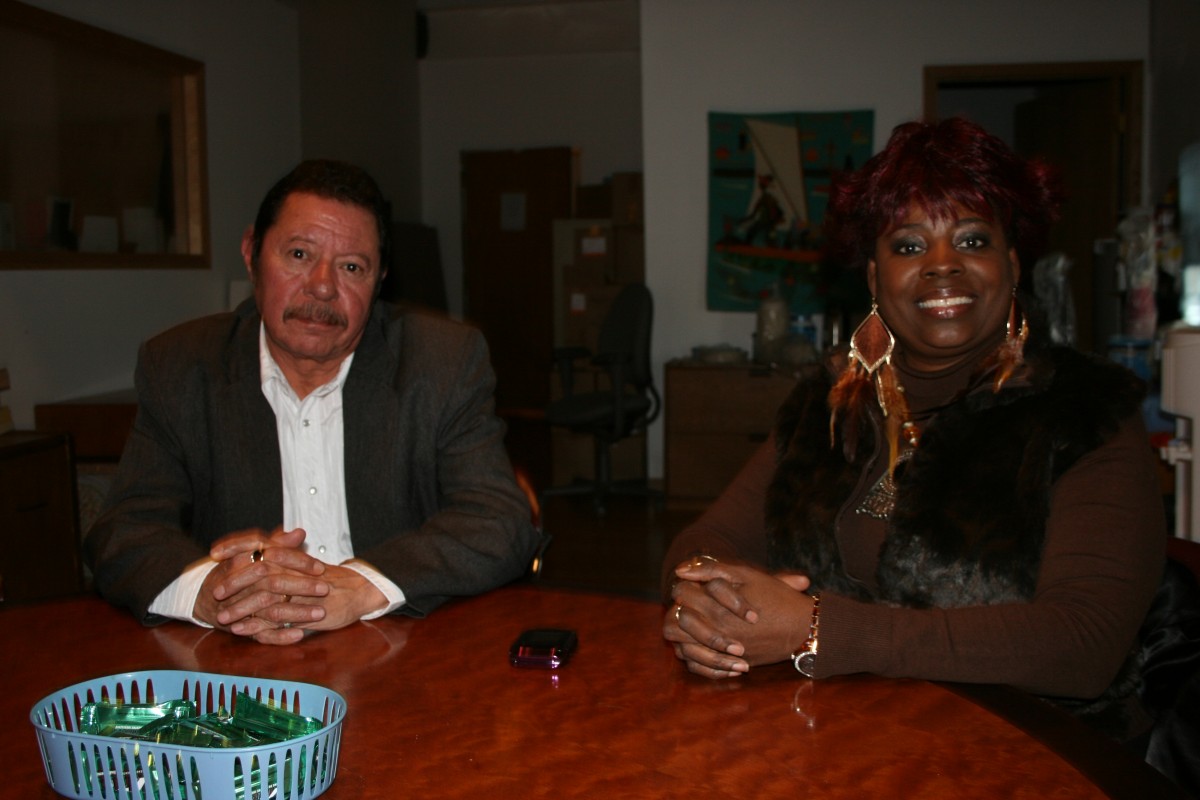 To eliminate inequities, fundamental changes in political and economic systems must occur. To do this, diverse, multiracial groups of people must come together. Power comes through forming relationships, organizing and strategizing, say Salvador Miranda and Julia Freeman of the Organizing Apprenticeship Project (OAP).

OAP’s first Racial Equity Gathering in June brought over 200 people in OAP’s network together to hold conversations and participate in workshops, pool ideas and develop strategies to take home with them.

Key to OAP’s work is getting people at all levels of society to be explicit about racial inequities, placing the subject at the center of their conversations and actions, always being aware that “race matters.” OAP trains community organizers and racial justice leaders, creates research and policy tools—including a Legislative Report Card on Racial Equity and series of Racial Equity Policy Briefs—and convenes multiracial strategy groups that collaborate to develop “thoughtful approaches for achieving equity.” Grounding community organizer apprentices in history is another essential part of their work. Curriculum developed by OAP exposes organizers-in-training to the nation’s legacy of racism. Because of changing demographics, much of OAP’s work is in communities such as Mankato, Duluth, and Willmar. According to Freeman, such communities often “need an outside perspective to ignite energy.”

Miranda and Freeman see Occupy Wall Street as a “glimmer of hope.” It shows that “many in the dominant culture” are aware of gross inequities and are feeling the effects. They value all efforts that challenge the “dominant frame” in the United States, which they say holds individuals personally responsible for their station in life, suggesting there’s something wrong with those who don’t succeed, rather than looking at institutions’ roles in creating conditions that make some people wealthy and others poor.

The case for option B: Change the culture to institute necessary economic reforms 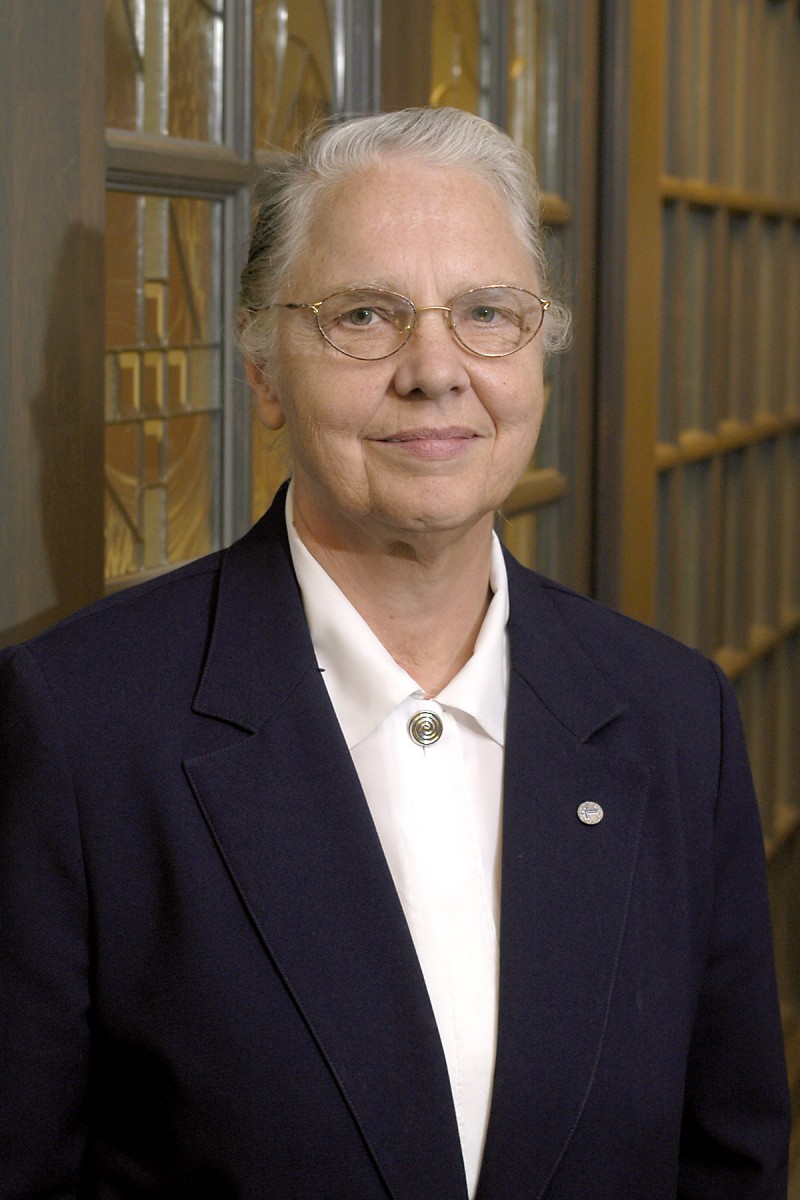 Inequalities can be addressed through reforms, but for that to happen there must be a “cultural conversion” through a shift in values. Sister Amata Miller, professor of economics at St. Catherine University, says that Great Society programs of the 1960s were possible because of a public mood that tapped into “the better side of our people.” The wealth gap grew, starting in the 1970s, because the political right organized while the left drifted and unions were being weakened. The right then advanced legislative actions that helped those at the economic top.

Fortunately, she says, history shows that periods of greed and selfishness are eventually met by a social justice response. “Our quality of life depends on meeting our own individual needs, but also recovering a sense of co-responsibility” and confronting “excessive individualism.”

Miller acknowledges huge challenges ahead. Voting is essential, but the public is fearful and suffers from “economic ignorance,” so often votes against its best interests. Younger people, those born in the 1990s, don’t lack idealism, but live in a culture that worships money and places a premium on getting rich. “They don’t know any other kind of world,” she says.

While Miller expresses concern about some of Occupy’s approaches, its lack of focus and endurance, she thinks it may represent an end to “a drift” in this country. “I have often wondered why there hasn’t been a public outcry until now,” she says.

Miller is less hopeful about institutional change coming anytime soon, aware of strong resistance from political and financial institutions. She holds former House Speaker Newt Gingrich responsible for polarization that continues to this day. For their part, she says, banks are doing everything in their power to overturn financial regulations put in place by the Dodd–Frank Wall Street Reform and Consumer Protection Act. Still, she says there is historic precedent of members of Congress working together and compromising, “in the best sense of the word,” to address social problems.

Poverty and inequality are caused by broken families, argues Mitch Pearlstein, founder and president of the Center of the American Experiment. If a child is born out-of-wedlock and/or raised in a single-parent home, he or she is unlikely to succeed in school or economically. (He cites alarmingly high rates of out-of-wedlock births among African Americans, Hispanics, and American Indians in Hennepin County.) This, Pearlstein contends, is the main reason for persistent and growing wealth gaps in the United States.

Failures of individuals who grow up in fractured families are passed on to children and grandchildren, which in turn harms the country by making millions of citizens less competitive. It becomes “a perverse cycle.”

Governments, “already stretched,” are not the answer, Pearlstein says. So what’s the solution? According to Pearlstein, “Free-market principles, of course, are sound and fitting whenever economic hurdles are to be jumped. And a cultural and religious revival would be welcome, if hard to summon up.”

Key to addressing inequality, he proposes, is “real school choice.” Tough loving, paternalistic schools are the best hope for helping millions of American children “get their lives back in decent order.” “Would it not,” he concludes, “make sense to allow many more boys and girls to attend religious and other private schools, which have their ‘biggest impact,’ according to Harvard’s Paul Peterson, by keeping minority kids in ‘an educational environment that sustains them through graduation?’”

The case for another approach (please share your ideas)—

We want to hear your thoughts, whether you’re a neighbor, community organizer, local business owner, or elected official. Post your comments below, or join one of our community conversations. We will report conversations in the Daily Planet for the general public and policy makers. Come meet neighbors, get inspired, make decisions, and exchange ideas.