Income inequality is one of those things that we find almost impossible to talk about in US politics. Simply raising the issue automatically leads to charges of “class warfare”, a term that is empty enough in meaning to raise emotions without much intellect. Yet it is important.

One of the great features of recent global economic turmoil is the downturn in the developed world amid continued growth in the developing world. What’s the main difference between the two? According to a survey by the Economist, one of the main features is that the developing world generally has increasing income equality but the developed increasing inequality. Emotional arguments aside, there is a distinct trend that raises real questions of global competitiveness, at the very least.

Income inequality is measured by something called the “Gini Coefficient”. It involves a bit of calculus that is difficult to explain, but the net result is pretty simple. For any given population, perfect income equality (everyone earns the same) would yield a Gini of zero, and perfect inequality (one person has all the income) would be a Gini of one. A functioning economy naturally has a number somewhere in between.

There is no “perfect” answer for the ideal Gini Coefficient, but we can look at changes over time. In a recent survey by the Economist of changes to the Gini around the world over the last 30 years, we get this map: 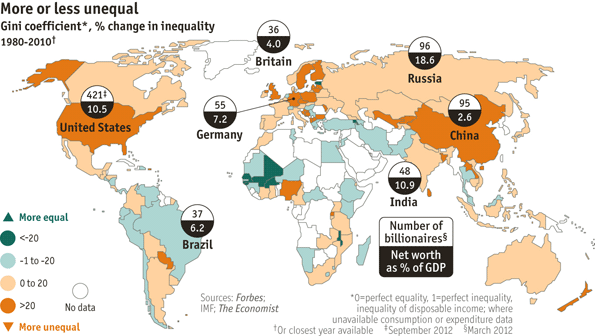 Developing nations have smaller increases in Gini, except for China. Some, such as the rapidly rising Latin America, have generally falling Gini Coefficients, showing increased income equality. The wealth is being shared more evenly as they grow. In Europe, the most developed nations (Germany, France, and UK) have the highest increases in inequality. Here in the US, the Gini Coefficient has risen from 0.3 to 0.42.

It’s easy to read too much into these numbers, especially since they do not mean anything in absolute terms. However, growing inequality is clearly a sign of decreasing opportunity and less ability to rise in status from one generation to the next. That it also seems to correlate with overall economic growth suggests that given modern economies there may be some level that is, in fact, optimal down around 0.3.

How do we change our income inequality? Another article in the Economist worth reading outlines a call for “True Progressivism” – a politics with a commitment to growth and opportunity for all. As a conservative and global magazine their particular prescription should never be taken as the final word for any given nation, but they have a point. Income inequality does seem to correlate with an inability to at least sustain growth in a modern economy. It is worth discussing no matter how emotional the arguments eventually become.

What contributes to a falling Gini (or increasing income equality)? In short, it is an increase in opportunity for all citizens of an economy. Education equality is the most obvious concern, but in a time of tremendous change there are many things which limit the ability to change jobs and remain as productive as possible. For example, many people in the US stay on a job simply to maintain their health care benefits.

The exact course of action to improve income inequality is not exactly obvious, but the need for it should be. This is not “class warfare”, it is a practical matter that has been shown to be a big issue and a serious limit to our nation’s competitiveness. Some kind of new Progressivism, which is to say a dedication to genuine progress, is essential.

What is clear is that growing income equality does, indeed, correlate with higher economic growth. Part of this is that it remains true that a rising tide lifts all boats. Higher income equality at the very least corresponds with sustainable growth, even as much of the world is turning the other way.

It’s an issue we would be stupid to continue to ignore. The labels designed to squelch the much needed discussion are not at all helpful and need to be put down. The future of the nation might well depend on our ability to at least confront the issue of income inequality and what it means as opportunity for everyone.