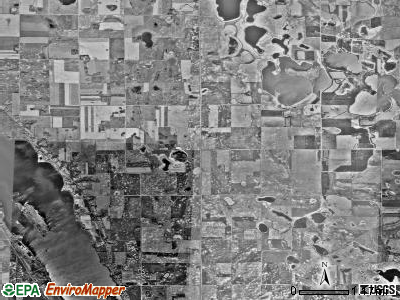 There’s much map-posting going on about votes on the amendments that were on Minnesota’s ballots, with some expressing surprise that the voter restriction amendment fared so poorly in Greater Minnesota.

Having spent much of the summer and fall writing about how the issue was covered in Greater Minnesota newspapers–including the discussion showing up in local papers’ letters section–Bluestem wasn’t surprised by the “No” votes, since the proposal possibly would cause enormous unfunded mandates for local government, and money is tight as a bark on a tree for local governments in those areas where the property tax base isn’t flush.

What surprised us more were those rural counties where citizens said yes, especially in that large angry cluster of Voter Yes Twice counties north of the Cities but south of the Range, the Really North Woods and the wheat and beet fields of northwestern Minnesota. We’re thinking of it as the “We’re mean to everybody” zone.

One line of analysis has been rural Latino communities made the difference in voter restriction vote tallies, but Minnesota Public Radio’s Dave Peters dispatches it in Latinos and voter ID:

If you look around the state at other cities with significant concentrations of Latino residents you get similarly ambiguous results. Willmar was slightly against the amendment. So were Le Center and Gaylord. Long Prairie, Melrose and Pelican Rapids voted in favor. All are in the top 10 outstate cites when it comes to percentage of Latino residents.

Voters in those cities uniformly supported Mitt Romney for president and they favored the marriage amendment that was also on the ballot.

So, frankly, I’m not sure what these voter ID results mean. Maybe nothing, other than the conclusion that factors other than race made the difference.

In that vein, check out this comparison between the photo ID and marriage amendment results. Why did the Minnesota River Valley, the far northwest and the extreme southeast vote against the photo ID amendment when similar demographic territory in central Minnesota, southwestern and western Minnesota voted yes?

What’s the answer to that? Bluestem was noodling the question around, while GAC math and computer science professor Max Hailperin was taking more serious pokes at the data.

Per capita income by county seems to be a factor–and those Greater Minnesota counties with lower per capita income that voted no on both amendments tend to be home to large student populations.

Hailperin also charted out the association between age and votes in a chart he shared on Facebook, “Can you tell which proposed constitutional amendment is which?”

With white oval = marriage and dark oval, voter restriction amendments on one axis and the percentage of a county’s population between 18-24, he produced this chart: 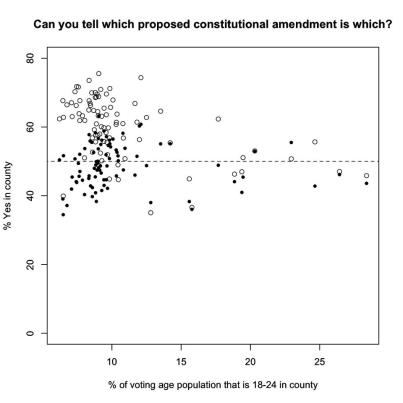 Polling of college students, commissioned by the Minnesota Public Interest Research Group (MPIRG), released May 4, showed that they favored the Voter ID amendment.

So did the rest of the state.

Why did students in St. Peter, Northfield, Winona and Mankato end up voting no on #2 like residents of Big Stone Township, Big Stone County?

Bluestem is looking more closely at what groups working to defeat the amendment did, with an eye to learning what worked. The look will be a bit more detailed than simply noting “messaging” and “grassroots,” as we’re learning that the fight for the rural voter was somewhat more complicated than that.

Of course, we’ll also dissect what the other side did wrong–and didn’t do at all. Stay tuned.

Photo: An aerial view of Big Stone Township. We know a few naysayers there.