When we talk about transit improvements, the shiny new big-ticket infrastructure like light rail or streetcars, which can provide new routes and new riders all at once, tends to get all the attention. However, all kinds of smaller and more inexpensive improvements make an impact even while getting few headlines.

Often these boost transit use and the overall experience for riders. One long overdue improvement is new, clearer, more informative maps for the Metro Transit system.

First, think about putting route maps with arrival times at every stop, showing what’s in the area and where the nearby routes run. Despite how common such maps are in light rail and subway stations, this remains remarkably uncommon in all kinds of bus systems, especially outside of downtown Minneapolis and St. Paul.

Higher-frequency routes should be marked on a map like this, too, to differentiate them from routes which run fewer buses. This would allow a more casual rider to identify the faster route with less wait time at a location where multiple bus lines stop. While much of this information tends to be available online, we still live in a metro area where there’s a great digital divide among age and economic groups.

Another online tool that we can bring to the stop for analog users involves showing riders where they can get to by transit within a certain amount of time, relative to the stop.

A map centered on the bus stop which showed a couple of concentric lines for different travel times like 10 minutes and 20 minutes would put a lot of convenient information in front of people who took the bus from that stop. The same maps could account for travel times when riding both buses and light rail in the same trip, too, just as the website Mapnificent does right now. Riders could actually see the travel opportunities which transit opened up for them. 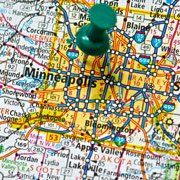 Probably the lines drawn on a static map at a bus stop would have to be based on a non-rush hour time, since they couldn’t be adjusted for time of day like an online tool. A rider who was looking for what new things transit could do for them would probably not be doing that experiment during their commute!

Making transit systems easily understandable to the people who ride them, and especially to people who may not have ridden them much in the past and aren’t familiar with some usual route, will pay dividends for transit riders in the metro and for Metro Transit. It’s a transit improvement which doesn’t require that we pay big money at the same time.