I keep having to rework this as events move quickly. I make no promise something big hasn’t happened since I posted, even if not much time has passed. Particularly, Tripoli fell to Libyan rebels while I was working on it, and changes things.

During an interview with UN ambassador Susan Rice on last Monday’s show, Stephen Colbert asked a question that would be more prominent were we not so tied up currently in domestic concerns. What’s the difference between Libya and Syria? The implications of the question are clear, even if it could be taken either of two ways: why are we intervening in Libya when we aren’t in Syria, or what are we waiting for to intervene in Syria when we did in Libya? Rice hit the main difference between the two at the end, but she had to stall for time to come up with the answer. That left me thinking some contingency planning was not getting done.

Yet — though Rice didn’t say “yet”. I’m adding that. There are other differences between the two countries, but that’s the key difference, and the key problem is that those differences could change. We don’t know how many deaths the Syrian opposition will tolerate before they ask for help beyond sanctions and supportive words. Obama did what the Syrian opposition seems to have wanted when he called for Bashir Assad to step down, but what happens when they ask for the same sort of help the Libyan rebels asked for? 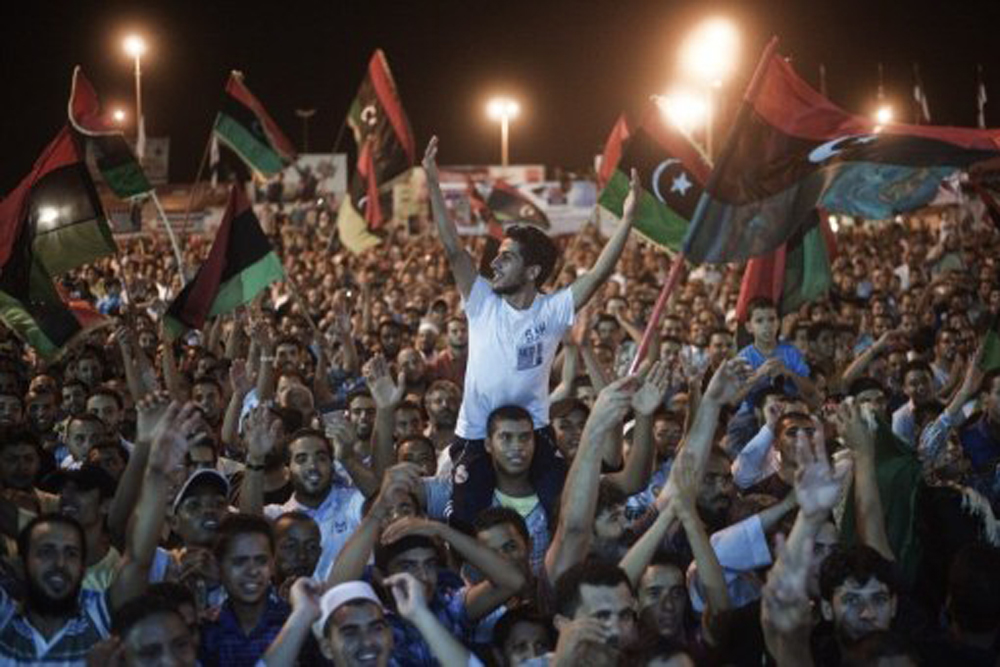 This Al Jazeera photo from Tripoli shows how fast the situation is changing.

Syrians have so far, as far as we can tell, avoided armed rebellion. How long will non-violent resistance go on as the Assad regime kills unarmed people? Is the oppression in Syria so bad, that visiting the horror of war on the country is an improvement? That wasn’t a question in Libya because not only was the opposition pleading for military help, but Libya was already at war. That’s the key difference that caused me to support it. In Iraq, once the given reasons for the invasion proved false, supporters used the excuse that the regime was so terrible that we had to invade, but look at the result. Can anyone reasonably argue Iraqis has been better off under invasion and occupation instead being left to overthrow their dictator in their own way and time?

So those are the reasons to not invade Syria: it’s not already at war, and opponents of the dictator aren’t asking for intervention. However, both of those facts could change quickly. Then what?

I’m expecting pressure to build on the US, meaning on the Obama administration, to take action now that the debt ceiling isn’t pushing all else to the inside pages. Since Obama isn’t trying to drum up support for an intervention, I expect the Republican “whatever Obama does is wrong, even if it’s what we want” machine to start cranking up pressure (to be let up only when Obama agrees to send in some sort of force, at which point Republicans will call him a warmonger — see Libya)*. There’s going to be more pressure than that though.

By the way, when Republicans try to argue Obama is being indecisive or waiting too long, the reason he waited until now to call for Assad to resign is he was coordinating with other governments to have simultaneous calls for resignation.

When I said the two essential facts that argue against intervention, that there’s no war yet and no one in Syria is asking for foreign invention, could change quickly, I didn’t just mean in the sense of no one knows the future. It has always struck me odd that the Syrian army would need to lay outright siege to cities where there’s no violent resistance. There have been reports of mutinies among some Syrian units (among stories you missed during the debt ceiling debate) and the government has claimed its soldiers have been killed by thugs or gangs. There might already be armed resistance to the government (always keep in mind Assad allows no foreign reporters, so we’re always working with the limited information that gets sneaked out). If that turns into widespread revolt, then it starts to look a lot more like Libya, leading to the possibility the rebels will draw the same conclusion as the Libyan rebels: better to tolerate foreign intervention than to lose and be slaughtered. Besides, now that the Libyan rebels appear to have won, Syrians advocating armed resistance have new argument to use.

That begs the question of why do we have to be the ones to intervene? Isn’t there anyone else who can, who might be in a better position? America will shortly have been continuously at war for ten years, with the strain on our armed forces and our treasury that implies. We’ve seen this movie enough by now however to know how this goes. With some exceptions, the pressure for someone to do something builds, and it turns out the rest of the world is waiting for us to go first. Call it the expectation that comes with being the one superpower and having by far the most military resources, or call it unfair, but there it is.

Turkey is on Syria’s northern border, and the government has built a good relationship with the Assad regime, but that means they might be needed to talk Assad into leaving, which they can’t do if they invade. NATO can’t legally go in without the UN Security Council asking or a NATO member being attacked, which hasn’t happened — though if Syrian troops cross into Turkey to attack rebel troops or refugees from the regime, that changes.

The Europeans are unlikely to act on their own because their resources proved strained by the air campaign in Libya, which is only one-third Syria’s population. The Arab League didn’t try to pull off the Libyan intervention itself even though they called for it, so I don’t see them intervening in Syria, especially when most of them see the precedent of overthrowing dictators to be a bad one. Besides, Assad has managed to avoid alienating every other government like Gaddafi did, leaving him zero friends who could help. Even the other dictators want Gaddafi gone. Assad has been a better neighbor though, so it’s doubtful whether neighboring states would even support an intervention, forget carrying it out.

So that leaves us. At least, that’s how the logic of the situation seems to lead.

Besides no one else being willing and able to intervene, it will be pointed out that we have 50,000 troops across in Iraq who are leaving anyway and could just go rolling across the border. I strongly suspect that logistics will be far more complicated than “just go rolling across the border” implies, but I foresee the argument. We have three wars currently, more if you want to count whatever we’re doing in Yemen, Pakistan, Somalia, and maybe more. But let’s call it three for sure. Our engagement in Libya is quite small compared to Afghanistan and Iraq, and Gaddafi is expected to be defeated shortly, freeing up those resources.**

*Forgive the awkward asterisk construction, but I couldn’t find a less awkward rewrite. It started already. Using the “lead from behind” theme Republicans seem to have decided on as an attack, Michele Bachmann said Obama’s call for Assad to leave was too late. Never mind that, as pointed out above, Obama coordinated with the other governments that called on Assad to step down right after Obama did, but Bachmann is clueless about leadership that requires more than blathering to friendly interviewers.

**Shortly appears to be down to hours, or down to already done, with the rising within Tripoli reducing Gaddafi’s control to just a few pockets. This means the military resources deployed to Libya are about to be freed up. That’s true for the Europeans too, but for those actively participating in the Libyan intervention, Libya is a lot closer than Syria. It’s hard to see either the Arab League or Security Council authorizing NATO intervention, and hard to see NATO doing it without Turkey being willing to carry much of the burden. That’s why I think the pressure for the outside world to act will fall mostly on us. On the other hand, if Turkey doesn’t want to intervene, it’s unlikely to let us use our bases in Turkey, which means Iraq could stop the whole idea if it refused to let Iraqi bases be used. It’s not at all clear Iraq would allow that. The temptation to remove a long time enemy of Iraq’s would be up against the large number of Iraqi refugees in Syria, would be would vulnerable to retaliation.