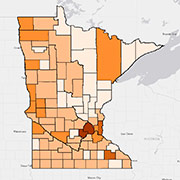 The major revenue raiser in the Governor’s revised tax plan is his 4th tier income tax, which increases the rate from 7.85 percent to 9.85 percent. It would apply to taxable income in excess of $250,000 for married joint filers, $200,000 for heads of households, and $150,000 for single filers. As the Governor has frequently noted, this tax increase would affect the wealthiest two percent of Minnesota households.

Six counties have twenty or fewer fourth tier taxpayers, which are excluded from this analysis due to data privacy concerns. The counties that fall into this category are Cook, Kanabec, Lake of the Woods, Lincoln, Mahnomen, and Red Lake.

This analysis is based on data for 2010—the most current year for which taxpayer information by geographic location is available. Despite the time lag, this 2010 data should provide a reasonable approximation of the regional distribution of fourth tier filers in the state. The information released by the Dayton administration covers only full-year resident taxpayers.

The graph below shows the percentage of full-year resident taxpayers affected by the fourth tier proposal (in red) versus the percentage unaffected (in green) for the fourteen most heavily populated Minnesota counties and for the entire state. With few exceptions, these fourteen counties are concentrated in the metropolitan and exurban areas; click here for a graph that shows information for all Minnesota counties excluding the six counties with fewer than twenty fourth tier taxpayers. 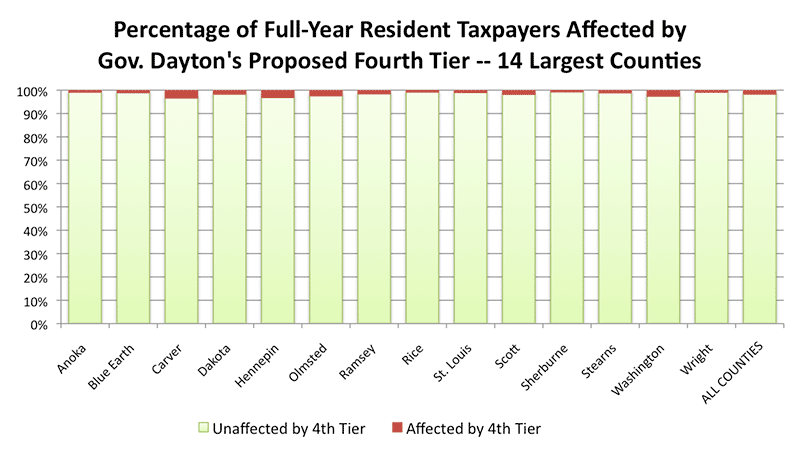 The striking feature of both these graphs is the preponderance of green (unaffected taxpayers). In 52 of the 87 Minnesota counties containing just over one-third of the state’s population, less than one percent of full-year resident taxpayers would be affected by the proposed fourth tier. In just four counties—Carver, Hennepin, Olmsted, and Washington—containing just under one-third of the state’s population, more than two percent of full-year resident taxpayers are affected.

In 74 of the 87 Minnesota counties, the percentage of full-year resident taxpayers affected by the proposed fourth tier is less than 1.45 percent. The state’s 5.3 million population is evenly divided between these 74 counties and the remaining 13 counties with a concentration of fourth tier taxpayers above 1.45 percent.

The Governor’s office and the Minnesota Department of Revenue have touted the fact that 98 percent of Minnesotans would see no income tax increase under the Governor’s budget. As it turns out, in the vast majority of Minnesota counties, the percentage of unaffected taxpayers is greater than 98 percent and—in fact—greater than 99 percent in just over half of the counties. Even in the county with the highest concentration of fourth tier taxpayers, 96.6 percent of taxpayers would be unaffected by the fourth tier income tax proposal based on the 2010 geocoded data.

The most powerful argument in favor of the Governor’s fourth tier income tax proposal is not the small number of taxpayers that would be affected. Rather, it is that the two percent of taxpayers that would be affected are already paying approximately 20 percent less of each dollar of income in state and local taxes than are middle-income families.†

These wealthiest two percent of Minnesota households are benefiting the most from the protection of property rights and the social stability that results from adequately funded public institutions. It is only fair to require them to pay state and local taxes in proportion to what is paid by their less well-off neighbors. Governor Dayton’s fourth tier income tax proposal moves Minnesota closer to a more fair and proportional tax system, while also providing the revenue needed to balance the state budget and adequately fund critical public investments.