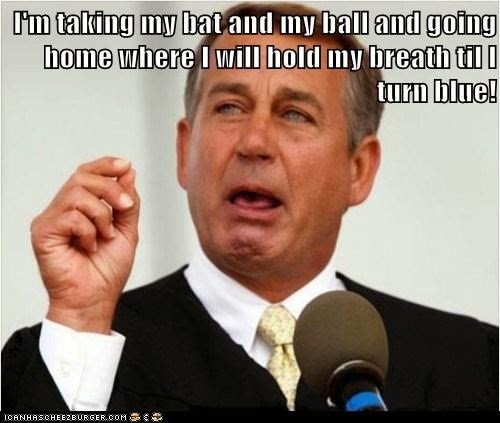 So Obama finally showed some backbone and did what he should have done before the election–he acted on immigration. Had he done this before the election as he said he would (if Republicans did not act) then maybe more Hispanics would have voted for Democrats and the November results would have been different. Now we see Republicans engaged in a faux act of anger, declaring that they will get even. The Republicans should be grateful that Obama acted–it takes immigration off the table without Congress having to act, or not act, and therefore it removes a thorny problem for the GOP. But foolishly and predictably the Republicans have protested, only guaranteeing that they will continue to guarantee that Latinos vote for Democrats, perhaps for the next generation.

Republican anger belies they fact they if they do not like what Obama did they can always pass legislation on their own regarding immigration. It’s called legislating. Instead they plan retaliation, again a predictable and foolhardy response that will only ensure that Democrats will be able to make the case against the GOP Congress in the 2016 elections. Their reaction also provides justification for why they do not want to act responsibly– they can claim that they will not compromise with the president on anything because he acted when they refused to. Kind of like taking the bat and ball and going home if you do not like how others are playing the game. I think one calls this childish.

What is the reality? Are immigrants a net drain on the economy; specifically, are they a bigger drain on taxes and public services than they are overall contributors to the economy? Second, immigrants are depicted as taking jobs away from Americans. What do we know about both of these claims?

First, while acknowledging that immigrants may in some local settings or jurisdictions place some short-term significant burdens upon public services, overall they are net contributors to the economy. Several studies substantiate this point. The 2005 Economic Report of the President (produced under a Republican president) provided a detailed analysis of the impact of immigration upon the United States economy. The report noted that they as a group had up to a $10 billion net positive impact upon the economy. The report noted, for example, that while immigrants may be more likely than native born Americans to be on public assistance, the “net present value of immigrants’ estimated future tax payments exceeded the cost of services they were expected to us by $80,000 for the average immigrant and his or her descendants.” However, with changes in public assistance laws, that figure had been upped to $88,000. While better educated immigrants (high school degree or better) definitely reflect this contribution, even among those not as well educated, the gains from them and their descendants’ productivity nearly, if not totally, offset the costs they impose upon public services that accrue to state and local governments. Finally, the president’s report also provided other documentation regarding the impact of immigrants upon the economy. For example, it noted that immigrants paid Social Security taxes on income of $463 billion dollars. Moreover, because illegal immigrants cannot collect Social Security, it is likely that immigrants overall pay more into this government program than they receive from it.

In addition to the President’s 2005 report, other studies have noted the net economic benefit of immigrants to the United States. A 1997 National Academy of Sciences study found several net benefits associated with immigration, including a $10 billion net positive impact on the economy. Brad Edmondson’s “Life Without Immigrants” found that: “Illegal aliens in prison cost about $471 million per year, and they consume about $445 million more in Medicaid funds. But these costs are offset by about $1.9 billion in taxes paid by illegals and billions more in consumer spending.” Furthermore, the National Academy of Sciences, President’s Report, and the Edmondson study, all indicated that younger workers provided for important sources of productivity that also served the economy well. Overall, these and other studies clearly contested the myths that immigrants were a drain on the economy.

In general, broader studies on immigration in the United States also confirm that there is a net benefit of immigrants to the economy. They generally pay more in taxes than they consume in public services. They have provided critical payments to Social Security to help maintain its solvency. Heidi Shierholz in Immigration and Wages: Methodological Advancements Confirm Modest Gains for Workers found that even native US citizens have seen modest gains in terms of wages as a result of immigration. More importantly, California, Florida, New York, and Texas, the states with the highest immigration, seem to have particularly benefitted from it. Others reach similar conclusions about the impact on workers while noting that the granting of amnesty to illegal immigrants has benefitted the economy and increased tax revenues to the United States.

The second criticism leveled against immigrants is that they take jobs away from American workers or they negatively impact wages. Again, several studies refuted that. For example, the National Academy of Sciences study found the wage impact to be negligible, while the President’s Report found little impact on wages of Americans. The report also noted and dismissed the argument that immigrants displaced American citizens in the labor market. Instead, they often filled labor gaps abandoned by others, such as farming and agriculture, and they definitely constituted a new source of productive labor particularly at a time when the size of the labor pool from other workers had disappeared.

In addition to the above a Pew Hispanic Center study reached similar conclusions. It compared the economic growth in selected states with high versus low immigration and found no differences in economic growth or in its impact on the labor markets. It also found that there was in fact in 12 states a positive correlation between the growth of immigrant and native-born workers. By that, there was no evidence that in states where more immigrants entered the labor market it depressed the entry of others into work. Finally, even among immigrants who were young and lacking in education, there was no indication that they directly competed against and hurt native-born workers with similar background.

In sum, the evidence that immigrants are financial drains on the economy and that they take jobs away or hurt the wages of native-born workers is simply false. Attacking immigrants and blaming them for society’s problems goes a long way back in American history. Republican refusal to act on immigration may in part be based on the xenophobic attitudes of its base, but the political calculus in taking such a position is bad politics. Obama set a trap for Republicans with his action and the GOP has taken the bait.