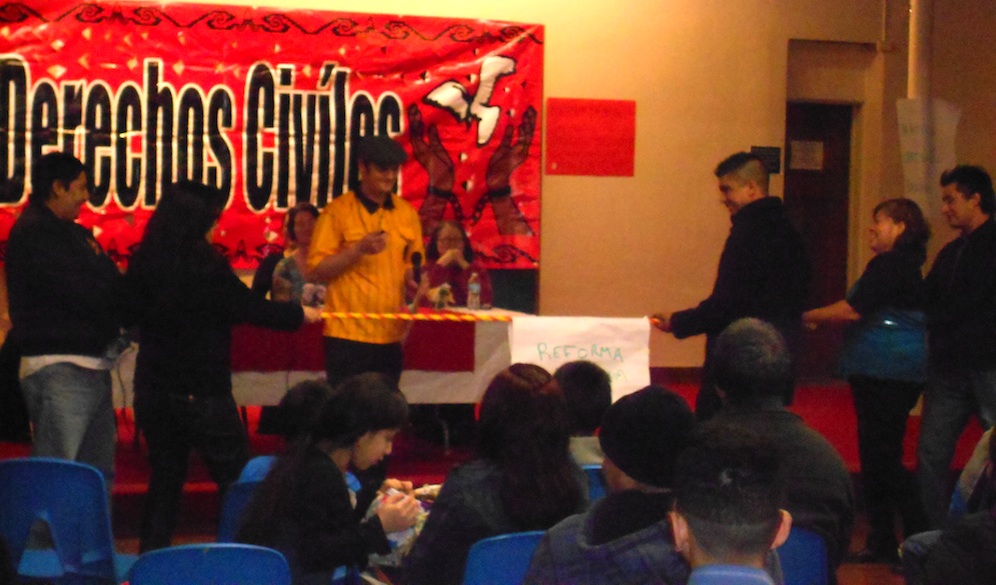 The climax of the event featured a dynamic in which participants simulated a tug of war between "justice" and "injustice."

“When it comes to organizing, it’s easy to organize a rally and have thousands of people show up and they scream and yell. But to organize a group of people that’s committed to work—that’s more difficult,” said Pablo Tapia, co-founder of Asamblea de Derechos Civíles. Tapia was speaking at the “A Dream for All” immigration forum on March 3 at Incarnation-Sagrado Corazon de Jesus Church in Minneapolis. Instead of screaming, the approximately 100 attendees seemed to leave the event eager to commit to working on immigration reform.

The forum was held through the partnership of several local organizations, including unions, clergy, Asamblea de Derechos Civíles, as well as Gamaliel, a national faith-based organization that works on various social justice issues. Panelists included representatives from the Latino Communications Network, Minneapolis City Council, Communities United Against Police Brutality, and the Immigrant Law Center of Minnesota.

The climax of the event featured a dynamic in which participants simulated a tug of war between “justice” and “injustice.” When the side of “injustice” easily won, organizers questioned participants: “Why didn’t you come up to help fight for the side of justice? Was it more comfortable staying on the sidelines?” Organizers named excuses as the number one reason why there was a lack of support representing the side of “justice,” and compared the dynamic to past efforts to organize people to support immigration reform. They were quick to then remind attendees that the dynamic need not be repeated and broke the group up into small action committees to plan future participation.

Various attendees reported feeling motivated and optimistic following the event. They requested their names not be used out of fear for themselves or their family members. “Daniel,” an undocumented immigrant from Mexico reported feeling,” Very optimistic. I’m excited by the fact that for the first time immigration reform sounds like a real possibility.” He plans to attend rallies and prayer vigils organized by Gamaliel in the near future. “Elizabeth,” a documented immigrant from Mexico whose sister is an undocumented immigrant, described the event as, “Beautiful. We can all work together to get a reform that’s needed.” She plans to discuss the issue with, “friends, family, people on the street.”

Father Kevin McDonough of Incarnation-Sagrado Corazon de Jesus Church, reiterated that the event demonstrated what he sees as a recent “groundswell of Spanish-speaking folks to get organized amongst themselves as they now have the economic and political realities to make that possible.”

Future events planned by Gamaliel include other church forums in the Twin Cities, events with allies such as the local Carpenters Union, and meetings with local political leaders on both sides of the issue of immigration reform. Pablo Tapia described the forum as “the beginning of the resurrection of the immigration issue in Minnesota—reviving the hope.”