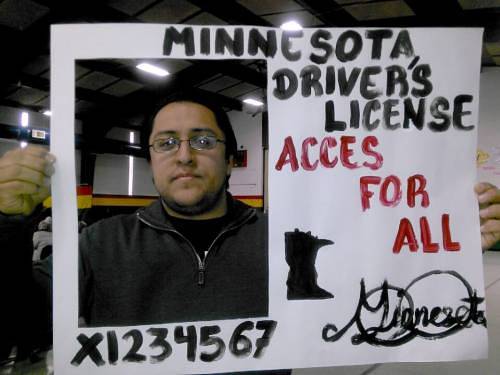 Minnesota’s One State, One License coalition got an early start, rallying at the legislature on the session’s opening day. The coalition wants all Minnesota residents, regardless of immigration status, to be able to take the driver’s license test and qualify for a license. They also want all licenses to look the same, without special marking for immigrants’ licenses.

New Mexico’s experience supports the argument that licensing undocumented immigrants helps all the residents of the state. After implementing the law in 2003, New Mexico’s rate of uninsured motorists fell dramatically. In addition, licensing all drivers supports economic participation and traffic safety.

California began issuing licenses to all residents, regardless of immigration status this year, with more than 46,000 applicants in the first three days. The state expects more than 1.4 million immigrant applications over the next three years. Pulitzer Prize-winning reporter Jose Antonio Vargas wrote:

“We are human beings. But I cannot overstate what this piece of government-issued paper—I’ll get the ID in the mail in the next two weeks–means to me, or to my family and friends.”

Predictably, Fox News denounced the California law, falsely claiming that it would provide a “back door to citizenship” and would require California police to overlook illegal activity. In fact, California police supported the legislation. The Los Angeles Times wrote that LA Police Chief Charlie Beck supported the law, “arguing it would reduce the number of hit-and-runs because such immigrants would have less fear of being caught for driving without having insurance.”

The California law establishes a special marking for licenses issued to undocumented immigrants. That’s something Minnesota organizers want to avoid.

In Arizona, thousands of DREAMers began applying for drivers licenses in December, after the Supreme Court struck down Arizona Governor Jan Brewer’s executive order barring them from eligibility. The DREAMers are young people who registered under President Obama’s Deferred Action for Childhood Arrivals. The Supreme Court action leaves Nebraska as the only state barring DREAMers from getting drivers’ licenses, and a case challenging Nebraska’s ban is moving through the courts.

Photo from Facebook page of One License, One State Coalition at https://www.facebook.com/unestadounalicencia.