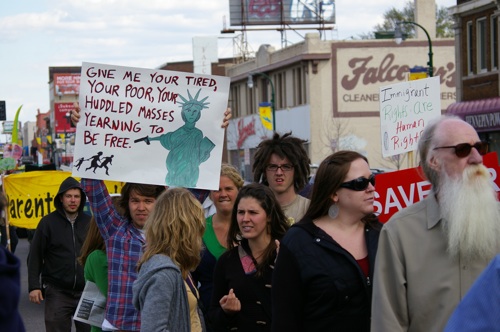 Photo from 2009 May Day march on Lake Street

Looks like there are two marches planned for International Workers Day (aka May Day) on May 1 in the Twin Cities. Over the past decade, May Day has also become a rallying day for immigration reform and immigrant rights. In St. Paul, the Mesa Latina is sponsoring a march for immigration reform at 3 p.m., starting from the State Capitol, and a rally at 4 p.m at Central Presbyterian Church (500 Cedar).

SEIU Local 26 and Asambleas de Derechos Civiles will be sponsoring a march for immigrant rights Wednesday, May 1 — International Workers Day. Meet for the march at 2:00 p.m. at the corner of East Lake Street and Hiawatha Ave. in Minneapolis.

The Facebook post for that event calls it Todos Juntos Por una Reforma Migratoria / Together for Immigration Reform.

After the marching is over, you can relax and soak up a little history at Black Dog’s May Day evening, 7-9:30 p.m.

Find out why May Day was chosen as the annual date to honor workers the world over. Celebrate worker solidarity with novelist and poet Anya Achtenberg, actress Kathleen Heaney, labor historian and activist Dave Riehle, music from Northern Minnesota’s Red Finns performed by Diane Jarvi and anthems of the Paris Commune and revolutionary France sung by Yvonne Peralta. Hosted by Rich Broderick.