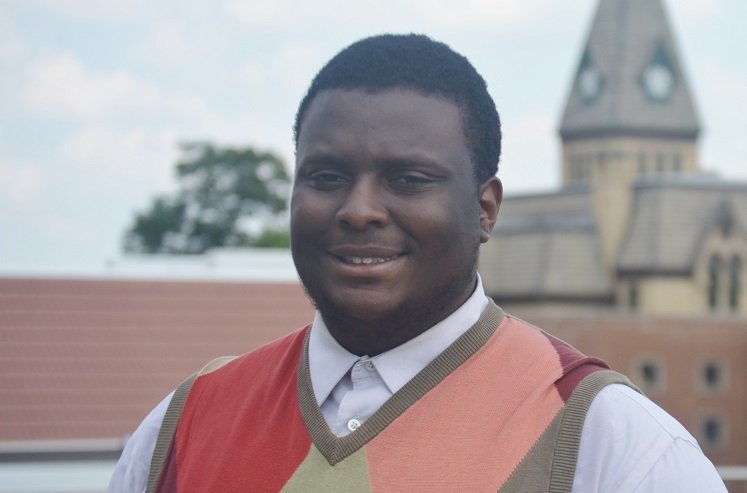 Immanuel Jones, 21, a junior at Minnesota State University Moorhead, says he’s trying to become a successful entrepreneur with the goal of giving back to the community.

“My mantra is to create impact, and my mission statement is creating impact deeper than the surface because the surface is not deep enough,” Jones said.

Jones founded an urban garden that helped feed more 100 individuals. He also has two clothing businesses trademarked, I Rep Christ (IRC) and Life Without Shame, based on a model where consumer purchases will help give clothes to someone in need.

Jones said that early in life his mother had him volunteering, whether it was for church or the Salvation Army.

“She had us volunteering a lot to keep us out of streets and to make sure we were learning, because there are a lot of things you don’t learn in school. We needed those real-life lessons,” Jones said.

Community involvement and using business as a catalyst to give back was something Jones said he learned from his mentor, D. Craig Taylor, executive director for the Business and Community/Business and Technology Center at the University of Minnesota.

“I made the decision to mentor him because I see the potential there. I want to see him become the man his mother knows he can be,” Taylor said.

Jones met Taylor as a high school student in 2010 when he participated in a summer program at the University of Minnesota called jEM, Junior Entrepreneurs of Minnesota. Taylor supervised the program.

“[I was] very intrigued by his level of engagement in the program, very committed,” Taylor said of Jones. “I saw in him incredible potential to be a leader.”

Through the jEM program, Jones connected with head facilitator Engeda Selemon Asfaw. Jones came up with the idea of an urban garden, and in the summer of 2011 Asfaw helped Jones turn his idea into a reality.

The project received $2,000 from the University of Minnesota and from Spectra Meyers of the Ashoka Youth Venture. Michael Chaney, founder of Project Sweetie Pie, a local initiative that employs and trains youth in urban farming, allowed Jones, along with two other groups, to operate the garden on a lot in Minneapolis at 1422 Oliver, which they refer to as “Olive Garden.”

“We’re like the Johnny Appleseed of Olive Garden,” Chaney said.

Chaney said they had five gardens and 50 partners. He knew Jones’s reputation and saw him as a “young entrepreneur and a go-getter,” and that’s why he decided to help Jones.

As a young entrepreneur, Jones reaches out to high school students to inspire those behind him.

“He understands the value of sharing his expertise with the others behind him,” Taylor said of Jones. “He’s been more aware of the talent he has, the skills he has.”

Jones has been a keynote speaker this summer for jEM. He also worked as a facilitator for a program under the University of Minnesota’s Landscape Arboretum called Urban Garden Youth Employment (UGYE).

“I want to help inspire people. I want to keep giving back the knowledge,” Jones said.

For UGYE, Jones served as a facilitator to help a group of high school students start a business. He taught them professional communication skills, helped them create a business model and assisted in developing business strategies.

This fall, Jones is a junior at Minnesota State University Moorhead and he plans to major in international business. Jones said he wants his college experience to serve as a blueprint for prospective students to understand college is feasible and important.

“It elevates your game from checkers to chess and I want to see them play chess,” Jones said.