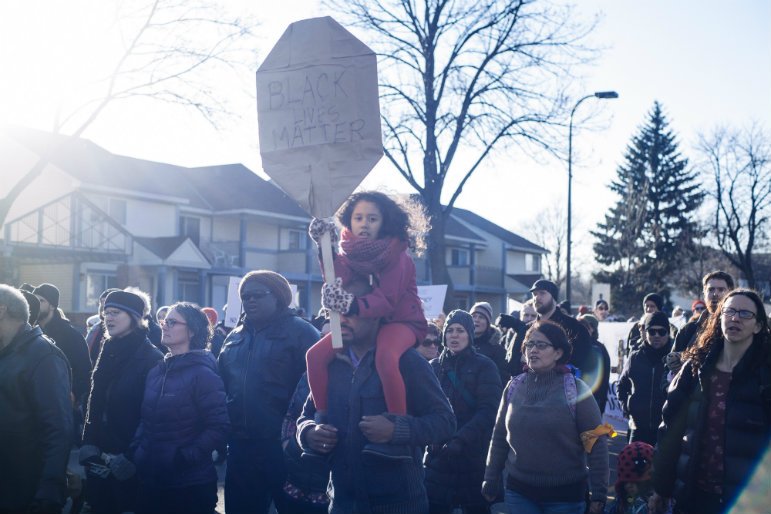 What does it say when teachers who are worried about their (and their students’) safety are labeled racist?

What does it say when the vast majority of our children who grow up in worlds of “toxic stress” are low-income students and students of color?

It says a lot about us, about our disregard for our children, particularly the most vulnerable. It’s about our common desire to feel safe, feel heard, feel valued and to live in a world of creative tension—not toxic stress.

One of us is black, one white. Both of us are educators, both are male. We don’t know the answers, but we think we have some good questions. And we share the desire to learn how we’re different, how the same, and how—together—we can help create the kind of world that our children (and grandchildren) deserve.

Malik: As we peer into the abyss that swallowed our brother Jamar, we have to ask the question: Was it the outcome of a lifetime of toxic stress that brought a young man who should have been fully embracing and protecting a life of possibility to the brink of making the ultimate in nihilistic decisions, while a frightened police officer’s gun was shoved in his face? Was he feeling bravado, fear, consternation or just surrender to a life that felt like an absurdist French comedy of errors that never really got to the funny part? We won’t ever know, because his ability to articulate his perspective, his ability to clarify his thinking, his ability to refine the point he was trying to make was snuffed out at the hands of a man who was frightened for his life. A man who happened to be white. A man who had permission to punctuate a sentence with a bullet.

John: I totally agree. But we have to see how toxic stress differs from healthy stress. The two of us have healthy stress, which becomes creative tension. It’s creative because we’re different. I’m kind of Old School—education is about forming relationships—and you’re all about the tech stuff. We can fight about it. But we can also maybe find something that neither of us alone would have seen, like some way to use technology to create a kind of virtual reality experience where students in different high schools can interact with a professor at a college, just as if they were in the same classroom.

Malik: Actually you’re more than “Old School” in my eyes. Old school is a Gel Pen without a cap, you’re more of a handmade feather Quill kind of guy sometimes, but I cherish you and your ancient flip phone that we have to wash the dinosaur excrement off of. But, the power in our creative tension is the fact that even though our methods might differ, we listen to each other well enough to find where our paths of perspective come together in the wilderness, and we have found the joy in walking that road together. It can be hard. It can entail compromise and sometimes you discover you’re wrong and I work to be gracious in my perfection . . . okay, sometimes I come up with stupid complicated stuff that is NerdFun but useless to everyone outside of my head.

John: Yeah, I forgive you for that. But the point is—even when it’s hard we’re having fun, we’re playing around. Toxic stress is different. It’s always being in fright/flight/fight mode. You feel threatened so the best defense is a good offense. Somebody does something little and you snap. It’s not you. It’s not who you are. It’s what happens when your brain is always flooded with adrenaline. The deal is, when you’re like that you don’t think first, you react first.

Malik: The toxic stress that so many of our Global Majority brethren here in the US die through daily is a thing where understanding and listening is never achieved. The creative tension you and I thrive in is an outpouring of hearing each other, but what I understood from Mr. Freeman’s recitation of the findings is that understanding and listening were not the order of the day between those three men who struggled—only two of whom are still breathing today.

John: In toxic stress the world’s full of enemies or friends—nobody else. In creative tension both points of view can be right—every perspective has some truth to it. Like, I get why those St. Paul teachers feel threatened. But I also get why those kids may snap at what seems like just a little thing. It’s not a little thing. It’s the straw that breaks the camel’s back. To them maybe the teacher is another version of the cops, another version of the white world that shuts them out and keeps them down. Of course they want to stand up for themselves. If you don’t, you just get walked on.

Malik: Well I see this a little differently. The “little thing” is a matter of who has the power to define the struggle. In the classroom or the street. The teacher has all the cards, all the authority, all the power. The cop, simply said, has a gun. They don’t have to negotiate, they don’t have to be right. Their fear rules the interaction so much of the time. If the person in power feels threatened, then that means the other person must have been threatening him or her, even if that was not their intention. The problem is the fear disassociates the person in power from perceiving the humanity of the other person in some subtle and not so subtle ways. Disrespect-dehumanization is never a “little thing,” though it can happen over and over again, surrounding seemingly “little things.”

John: Yeah—fear, authority, intention, dehumanization. Those are key words. Just because a black man doesn’t want to back down. . . and yes, those cops are scared too, just like the teachers! So they have to give orders (as they see it), and if he doesn’t obey they can take him down. And if he resists they can shoot him. It’s him or them. And, in that situation, it’s a real choice—maybe the only choice, in their eyes. The question is, could it have turned out differently? Could they have played it cooler? Could they give him his dignity, not push him into a corner where somebody has to die, and it’s usually not the cop with the gun? That’s a question.

Malik: Yeah if they were talking at a reasonable volume from an arm’s reach away, respecting his person, his space, and the fact that he was obviously having an exceptionally crappy day, maybe none of this would have happened! Maybe if they didn’t assume he was a crazed and dangerous assailant, but a guy having a really bad day who just needed a shoulder to cry on, or a limit placed so he could feel his way back into himself. Maybe if they thought of how they’d want to be treated if they found themselves in the same situation, by some strange turn of events. Maybe if the interaction was one of creative tension toward a solution, not toxic stress forcing submission on one side or the other, we could ask Jamar “What happened, Man?”

John: Gosh, what a novel approach! I think in some countries they do what you’re saying—in countries ruled more by law than by guns. Would Jamar Clark be dead if the officer had a billy club? But my deeper takeaway is, what can we do about toxic stress? To me there are two things—insist on safety and turn toxic into healthy. Insist on safety because then you don’t need the adrenaline to start pumping. You can think first, not just react. (But that doesn’t mean guns or being the big dog.)

But then some healing has to happen. All that trauma doesn’t just go away. It has to be unburdened. People have to help you work through it. Then, maybe, you can start to meet the stress that’s just part of life—meet it in a different way. Turn it into healthy stress, use it to do something good for yourself and good for others. It’s not him or me anymore. It’s us.

Malik: If we all can start with the assumption that we’re doing the best we can with what we have and when we know better we’ll do better, as Maya Angelou so aptly reminded us. On both sides of the badge or the desk, the process might begin. It’s a teaching process.

John: And a connecting process, a learning to be human and to see that in each other. What I never want to read or hear again are the words, “I’m ready to die.”
Malik Bush and John Miller are co-directors of the Center for School Change, in St. Paul.