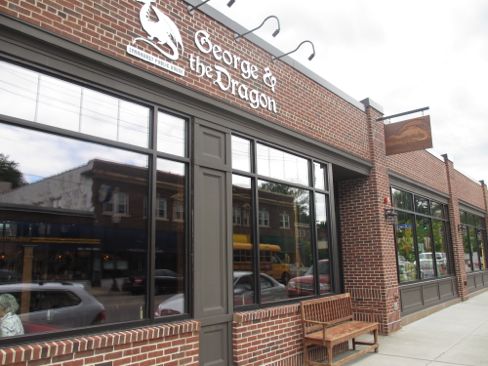 So much food, so little time – highlights and lowlights of a week of eating

George and the Dragon: best fish and chips I’ve had in ages

Stopped by at George and the Dragon at 50th and Bryant Ave. S. late on a Friday night and found a line out the door, and an hour-and-a-half wait for a table, but we sidled up to the bar and grabbed the first spots that opened up. We only ordered a couple of dishes, but they hit the spot perfectly – a refreshing salad of poached salmon over arugula, asparagus and creamy cucumbers, with a ginger dressing ($10), and what might be the best fish and chips I have had in years: crisply battered on the outside, amazingly light and delicate fillet on the inside. Nice selection of local brews on tap, including offerings from Harriet, Fulton, Steel Toe and Lift Bridge. 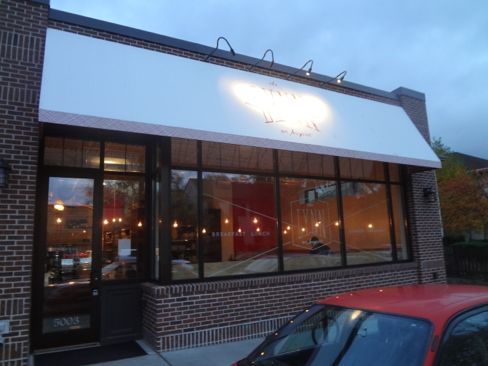 George and the Dragon may be content to be a “neighborhood public house,” but The Lynn (what’s with the definite article?), newly opened around the corner at 5003 Bryant Ave. S. has more upscale ambitions. While George and the Dragon offers burgers sandwiches and salads ($8- $12) and pub grub-inspired main dishes ($12-$18), The Lynn, which bills itself a “casual French bistro and cafe,” offers two options: the cafe in front, with more casual fare (sandwiches and entrees $12-$14) , and a dining room, where dinner entrees run from $19 for a vegetarian baby pumpkin filled with chestnut custard to $28 for Broiled Black Cod, White Beans, Sautéed Spinach and Tomato Compote. 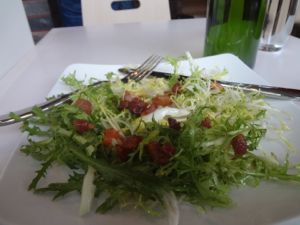 But the Lynn promises to serve up more than just French cuisine. They offer curated dining experiences. Really. Check out the video on their website. Owner/ general manager Jay Peterson says they want to “curate offline interactions with people,” and a few seconds later, owner/chef Peter Ireland explains the “a chef curates an experience for a consumer.”

The Lynn isn’t open for dinner yet, but I stopped by last week for lunch. I couldn’t bring myself to order a $14 Lynn burger (served on a House-made English Muffin with Béarnaise Sauce and French Fries, $14) so I opted instead for the rather petite frisee salad with lardons ($8) and poached egg (+$2), and a cup of the potato leek soup ($3). Somebody in the kitchen forgot to curate the lardons, but when I pointed this out, it was promptly corrected. 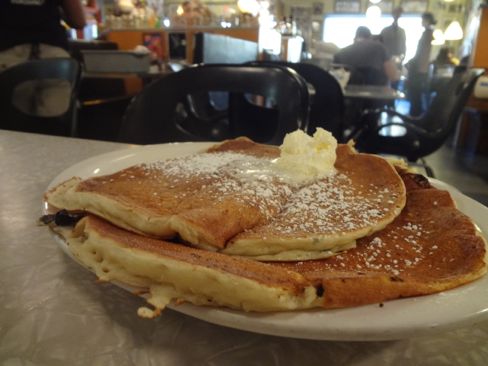 Here’s a great way to work up an appetite: go for a long bike ride on a loop that starts in Uptown, stops at the Kingfield Farmer’s Market (last outdoor market this Sunday) to buy a bag of Haralson apples from Havlicek’s Orchard, and then proceed to the Parkway and follow the Creek east. We turned south off the trail at Bloomington Ave. and headed a couple of blocks south to the Hot Plate Diner. Great fluffy blueberry pancakes, a delicious smoked trout scramble, and what just might be the world’s largest collection of paint-by-numbers art. Sorry to see that they no longer serve the lunch items, like tater tot casserole, meatloaf, etc., but they still serve breakfast daily till 2 p.m. daily. 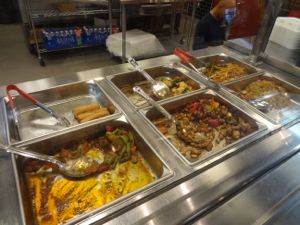 Sabbai Cuisine, the new Cambodian-Thai stand at the Midtown Global Market, is asking its Facebook fans for suggestions for new items to add to the menu. Seems like a good idea —  when I stopped by on opening day, the selection looked a lot like a food court Chinese buffet, only smaller: egg rolls, fried noodles, fried rice, and something that looked like kung pao chicken. I asked about the Cambodian / Thai cuisine, and was steered to a chicken curry dish, which wasn’t too bad. And pad Thai is now available on request. But the sooner they add some more Thai and Cambodian selections to the steam table selection, the better.