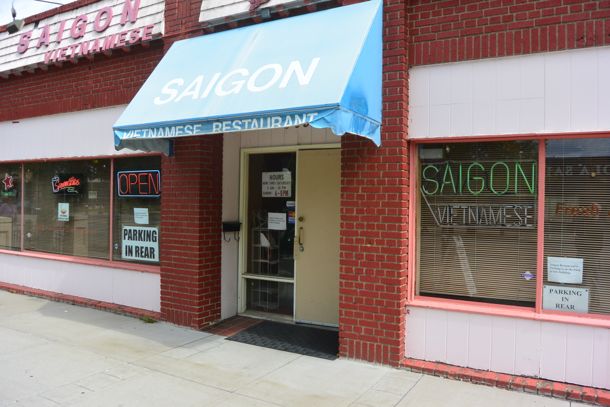 I tried to tell the two sisters who run the Saigon Uptown that they need to raise their prices. “We know,” one of them replied, “but we’re too busy.” Which seems a little odd, since whenever I have visited, it has been nearly empty. Instead, they have put a little note inside their menu, advising customers that all the listed prices have been raised by 50 cents. So pork with ginger and garlic sauce really costs $6.75, and the chicken with pineapples cost $7.

As you might expect at these prices, you get lots of fresh veggies and modest portions of protein. (Oddly, some of the prices on the take-out menu are the same as on the dine-in menu, some are 50 cents higher, and some have been increased by a dollar or more.) The beer prices have got to be the lowest in town – $2.20 for a Summit or a Budweiser and $2.60 for a Heineken.

I’m not going to claim that the Saigon Uptown is a great Vietnamese restaurant – you can find better Vietnamese on Eat Street or on University Avenue in St. Paul. But it does offer great value, the sisters are very sweet, and it is a classic – one of the few survivors of an era when newly arrived Vietnamese immigrants opened places like the Lotus and Perfume River and Matin. When those restaurants arrived, with the first wave of Vietnamese immigrants in the 70s, they easily nudged the old Chinese chow mein palaces out of their position in the local restaurant ecosystem, offering an Asian alternative that was cheap, fresher and tastier. The Uptown is also the last of the family’s Saigon restaurants – you may remember the ones at Knollwood, and at 38th and Grand.

You’ll find many of the classic Vietnamese and Chinese dishes on the menu – pho (beef noodle soup), spring rolls, egg rolls and a big assortment of stir-fries. The broth for the pho wasn’t as intense as some others that I have had, but one of the sisters informed me that it was really made from scratch the old-fashioned way, boiling beef bones for hours – while some of the other Vietnamese restaurants just add soup powder. My favorites so far have included the salmon with tomatoes ($7), and the chicken and coconut soup ($2.55).