Entenza is vying for the seat currently held by Democrat Rebecca Otto and hopes his rural roots will make him stand out.

“As a native of Worthington, Minnesota, I think it’s important to have someone who has the sensibility of coming from Greater Minnesota and understanding it’s not all about the Twin Cities, it’s about making sure that all the regions of our state have a fair shake,” Entenza said.

The unexpected last-minute move provoked consternation and bafflement among DFLers, glee among Republicans and a fake Matt Entenza twitter account with a taste for psychedelics and radical syndicalism. 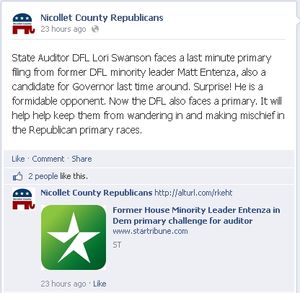 But the forces of confusion and dada come together no place better than on the Facebook page of the Nicollet County Republicans, who observed:

State Auditor DFL Lori Swanson faces a last minute primary filing from former DFL minority leader Matt Entenza, also a candidate for Governor last time around. Surprise! He is a formidable opponent. Now the DFL also faces a primary. It will help help keep them from wandering in and making mischief in the Republican primary races.

The note appeared over an link to an article about the auditor’s race in the Star Tribune.

Lori Swanson is Minnesota’s Attorney General, first elected in 2006. However, the southern Minnesota BPOU is on to something in this hall of mirrors, as Three DFLers battle for attorney general nomination, a 2006 Minnesota Public Radio report by Tim Pugmire reveals:

It’s been a short campaign for Steve Kelley, Bill Luther and Lori Swanson. None of them had planned to be a candidate for attorney general this year. But their plans changed suddenly on July 18. The withdrawal of Matt Entenza, the DFL endorsed candidate for attorney general, triggered a flurry of activity to fill an unexpected ballot vacancy on the last day of filing. . . .

Swanson won that primary, going on to defeat Jeff Johnson, who is now the endorsed gubernatorial candidate for the Republican Party of Minnesota–facing a tough primary of his own, against businessman Scott Honour, former GOP House Minority Leader Marty Seifert, and former House GOP Majority Leader Kurt Zellers.

If there’s one constant in Minnesota politics, it’s the art of recycling.

There’s another wrinkle. After being endorsed for attorney general in 2006, Entenza withdrew because (as KARE-11 reported):

Entenza, unable to shake questions over his wife’s employer and his own credibility, said he didn’t want to weigh the ticket down. He left the race less than six hours before Minnesota’s filing deadline for candidates, forcing replacements to make snap decisions.

Entenza’s campaign was thrown into turmoil with the revelation that he had hired a Chicago researcher to get information on Hatch, a fellow Democrat. Entenza first said he merely wanted to find out more about the way the office worked. But his answers appeared to evolve as more information came out, and Republicans gleefully attacked his integrity.

“While I’m confident that I could win the race for attorney general, obviously in this environment staying in the race would hurt the Democratic Party and the progressive issues we care so deeply about,” Entenza said at a news conference on the Capitol steps, with Quam beside him. . . .

Entenza ran for governor in 2010, going on to primary DFL endorsed candidate Margaret Anderson Kelliher. Both lost the primary to Mark Dayton, who had not sought endorsement, who later became governor after beating Tom Emmer in a photo finish.

Given the circumstances of Dayton gaining the endorsement, here’s certainly some absurdity in watching the party faithful bemoan Entenza’s sudden reappearance on the DFL horizon.

Such a situational was catnip to the anonymous force behind @Entenza4Auditor, a prankster who apparently noticed that no one in the newly-minted Entenza campaign had actually secured the twitter handle on various campaign documents.

The person squatted on the name and started tweeting. The tweets have become a sort of political twitter humor litmus test.

Here are some of the funnier tweets and exchanges. It begins innocuously:

But soon jumps into the sublimely ridiculous: 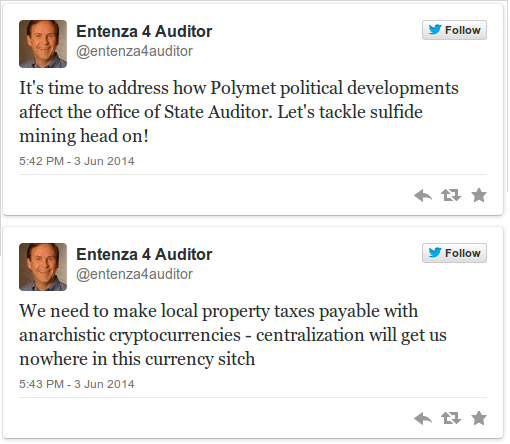 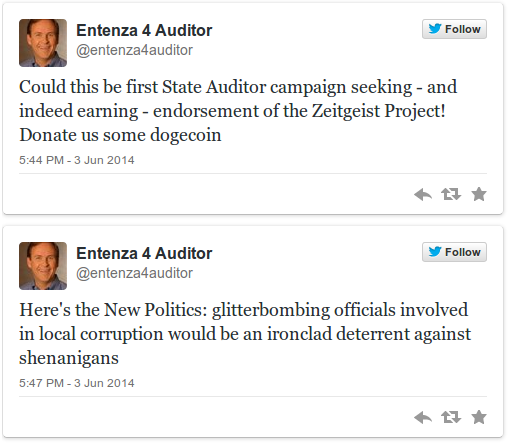 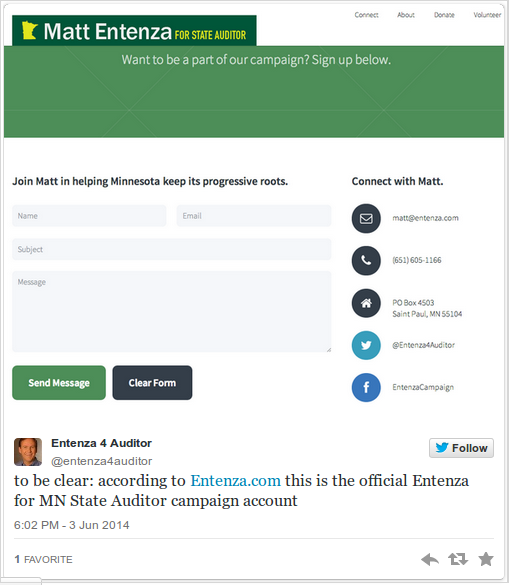 The twitter account for the real Entenza campaign was quick;y changed, but the spectacle at @Entenza4Auditor continued: 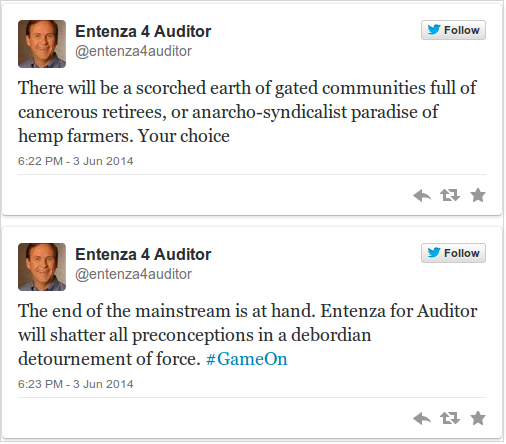 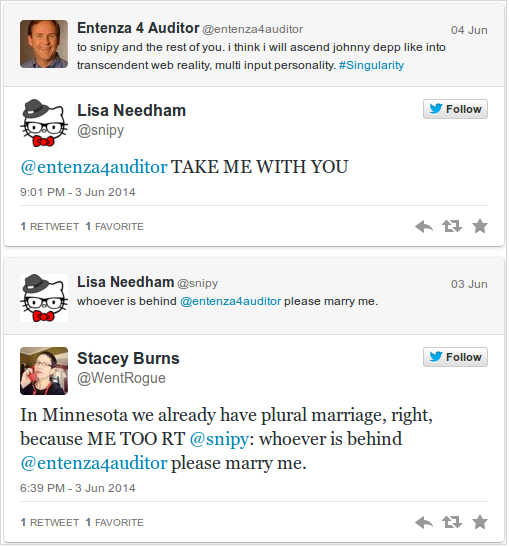 The account was briefly suspended but returned for more debordian follies: 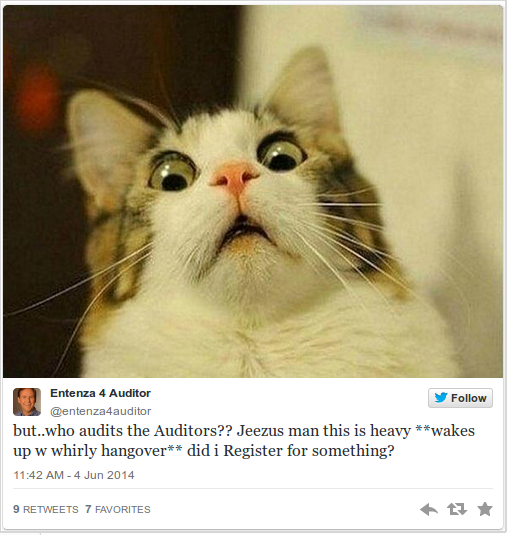 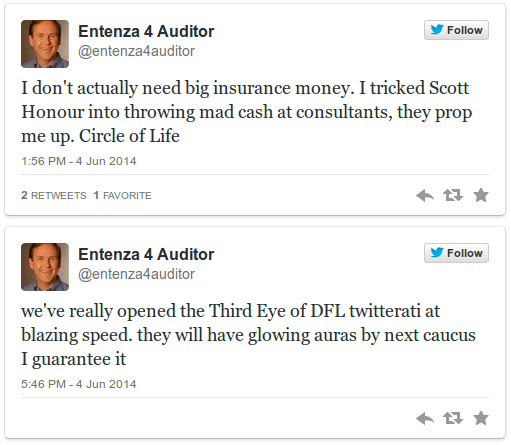 As we noted, these are just a sample of the 200+ tweets and replies, and the targets extend beyond the tender souls in the auditor’s race. Things have been a bit dull since glitter bombing dropped off the scene, and the only thing readers might get in their eyes from these verbal volleys are tears of laughter.

Top screenshot: The Nicollet County Republicans are quite certain Matt Entenza is running against Attorney General Lori Swanson. That’s so 2006, sort of.