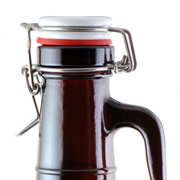 First, we had the hotdish bill. Next, the pickle bill. Then, we briefly relished the prospect of the growler’s expanded use, bringing tiny, craft-brewed beer to Minnesota’s washable container, beer drinking masses.

As the omnibus liquor bills move forward in their respective state legislative chambers, two proposed beer bills are notably absent. One would’ve permitted expanded brew pub distribution allowing brew pubs to bottle and sell their on-site brewed beers. Think of that one as the reverse Surly bill. The other bill would’ve permitted liquor stores to sell beer from kegs via growlers provided that the beer at issue wasn’t available for sale in cans or bottles.

Neither bill made it out of State House or Senate committees. They’re not dead but they’re not exactly alive either. These bills represented a step in the right direction but only a step. Mediocre beer, almost all of which is brewed outside of Minnesota, is widely available. But if you want to try some of the most innovative and compelling beers around, including Minnesota-produced products, you really have to work for them.

First, some definitions. Growlers are reusable glass jugs, typically a half gallon, used to sell tap beer for off-site consumption. Tap beer is beer stored in kegs and dispensed under pressure. Beer is a fermented malt beverage.

Minnesota can preserve its public health and public safety mandates while helping Minnesota’s entrepreneurial craft beer industry grow. Great beer will find an audience but its brewers don’t need rigid state regulatory policy making it any harder than it needs to be.