University of Minnesota researchers collaborated with an international research team to classify and catalog the galaxies using a website called Galaxy Zoo.

The public combed through more than a million pictures, classifying them using three categories and helping to discover new space objects. Another tool, Galaxy Zoo 2, offered analysis of about 250,000 galaxies using 37 characteristics.

The images came from the Sloan Digital Sky Survey, a robotic telescope in New Mexico that’s been taking pictures of space since 2000.

Researchers said the data, now assembled in a public resource catalog, can help answer questions about history of the universe, the differences between galaxies and the galaxies surrounding the Milky Way.

Research associate and lead author Kyle Willett said because the catalog has only been available for about a month, few papers have been published. He said he hopes there will be more in the future. 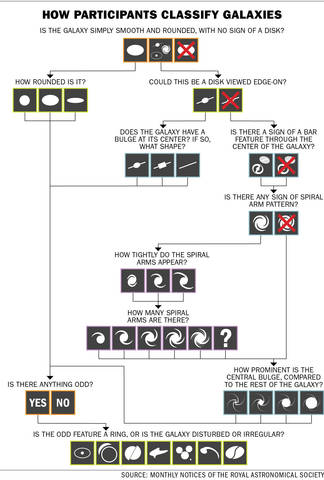 Since the participants weren’t necessarily astronomers, each picture was shown multiple times to make sure the galaxies were classified accurately.

“I feel like I know more about galaxies now after looking at pictures,” she said. “I think just from the exposure I’ve learned something.”

Volunteers were valuable because they identified galaxies more efficiently and found previously unidentified objects, Willett said. The public could also discuss and share observations directly with researchers on the website.

“Building that community has been a really important reason the project has succeeded,” Willett said.

The public discovered a star-forming type of galaxy called “Green Pea Galaxies.” Willett said they are green because of their high oxygen levels. The Green Pea Galaxies are small, but form stars quickly for their size.

“Eight to 10 billion years ago, all galaxies used to form stars in this way,” he said. “For some reason, [the Green Pea Galaxies] are still forming stars at this hyperactive rate that galaxies used to.”

The next step, Fortson said, is to categorize older galaxies into a second catalog and compare them to the current one.

“When we have the earlier galaxy catalog done, then we will be able to look much more at the evolution,” she said.

Since instructors are using Galaxy Zoo in their classes at the University, students can contribute to the research, too.

“I think it’s really cool that they’re able to use college students and use our knowledge … to help further science,” said international business and French sophomore Marisa Melchert, who took Nelson’s class in the spring.

She also said she thought the method was more efficient for researchers and helped students learn at the same time.

In the future, Fortson said she wants to add Galaxy Zoo to more astronomy labs and freshman
seminars.

“It’s an opportunity for students to play with real astronomical data as it’s coming off the telescope,” Willett said.