It wasn’t until my third visit to Icehouse on Eat Street that I discovered where I actually was.  As I was leaving, I happened to ask the hostess whether the sprawling warehouse-y space had actually once been an icehouse.

“Yes it was, and after that it was a deli. And then it was empty for a long time.”

A deli? What deli?

I was stunned. Sindbad Cafe and Market had been one of my favorite Eat Street restaurants for many years, and over the years I became friends with its owner, Sami Rasouli.

The shock of recognition brought home to me just how much Eat Street has changed over the years. What was once a low-rent multi-ethnic bazaar has steadily gotten hipper, with old favorites like Sindbad’s and Seafood Palace making way for trendier establishments like the Bad Waitress, Eat Street Social, and now Icehouse.  More change is on the way — the space that formerly housed Azia is scheduled to reopen soon as Azia Kitchen.

After three visits, I still miss Sindbad’s and Sami, but I am impressed with Icehouse. The building at 2528 Nicollet has been completely gutted and transformed into a very attractive “Live Music Restaurant.” The front room has a stage, a bar and balcony seating- a more intimate, lower-budget version of the Dakota, while the back room features a deli counter and an open kitchen.

The menu is billed as “chef-driven.” The chef in question (and co-owner, actually) is Matthew Bickford, who is also chef and co-owner, with Mike Ryan, of Be’wiched, the very fine sandwich and deli restaurant in the North Loop. 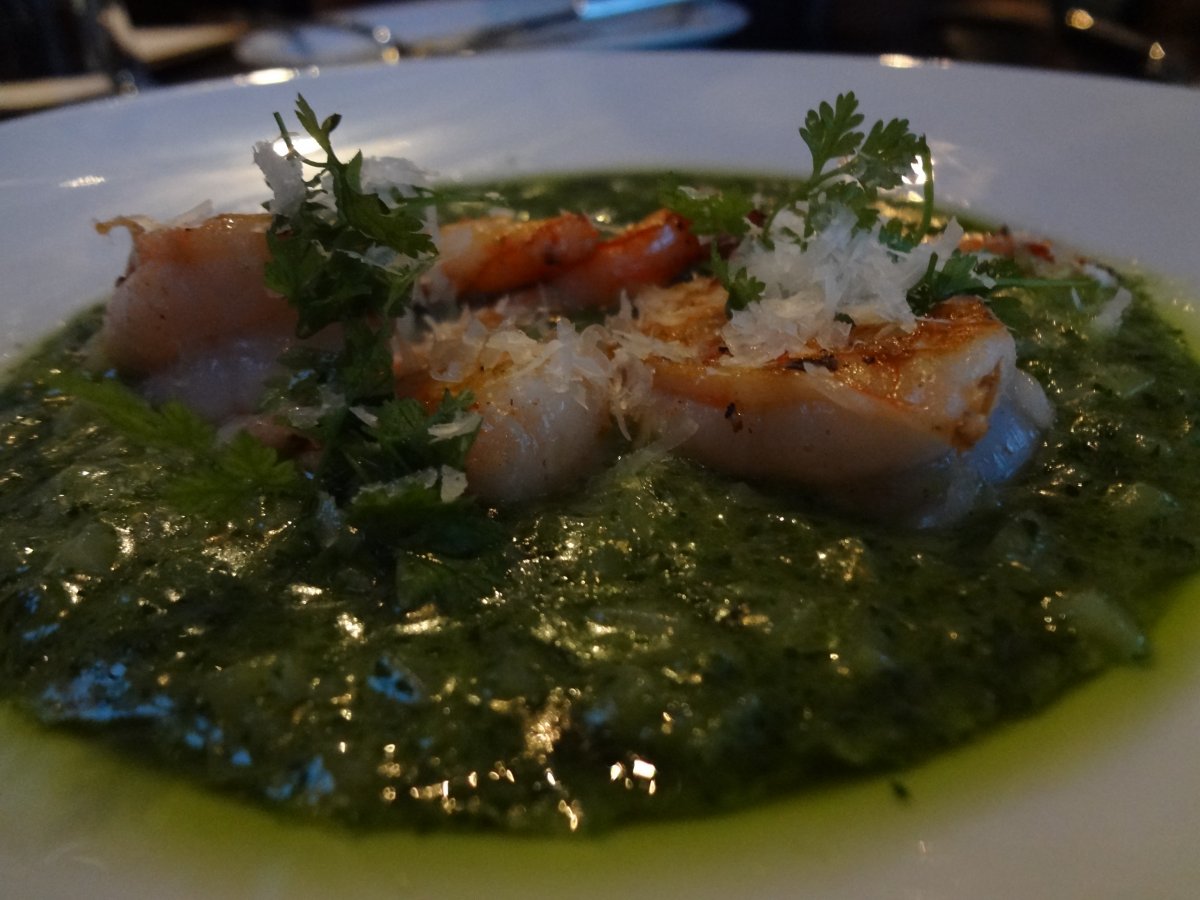 Not surprisingly, sandwiches are an important part of the menu at Icehouse, especially at lunch, but the dinner menu also offers an interesting selection of small plates. On a recent dinner visit we sampled a variety of these, including the mushroom artichoke canneloni with Robiola cheese ($10.50); a crab cake mac and cheese, a creamy bowl of pasta topped with crisp crab croquettes ($10.50), and a shrimp potato basil risotto ($12). All of these were very rich, combining subtle flavors in a way that focuses your attention. So was the salmon trio, small chunks of salmon prepared three different ways (cured, seared and pan-fried) and combined with dill, salmon roe and a tidbit of white anchovy ($12.50).

Other highlights came from the “greens & company” section of the menu. The plate of smoked trout with porcini mushrooms, walnuts and horseradish creme fraiche ($9.50) combined and tempered the flavors of smoke and forest and pungent root, holding them in a delicate balance. Better still was the truffled cheese souffle with rhubarb and arugula ($8), a delicate little custard with a smooth texture and just a hint of truffle aroma. The rhubarb pie, with just the right balance of sweet and tart, and a crisp homemade crust, was just about perfect. As always, there is lots more on the dinner menu I would like to try, such as the gnocchi with crispy sweetbreads, escargot and red wine ($12.50), the lobster fettucine ($18.50), and the grass-fed beef with roasted marrow and chimichurri ($15.50) 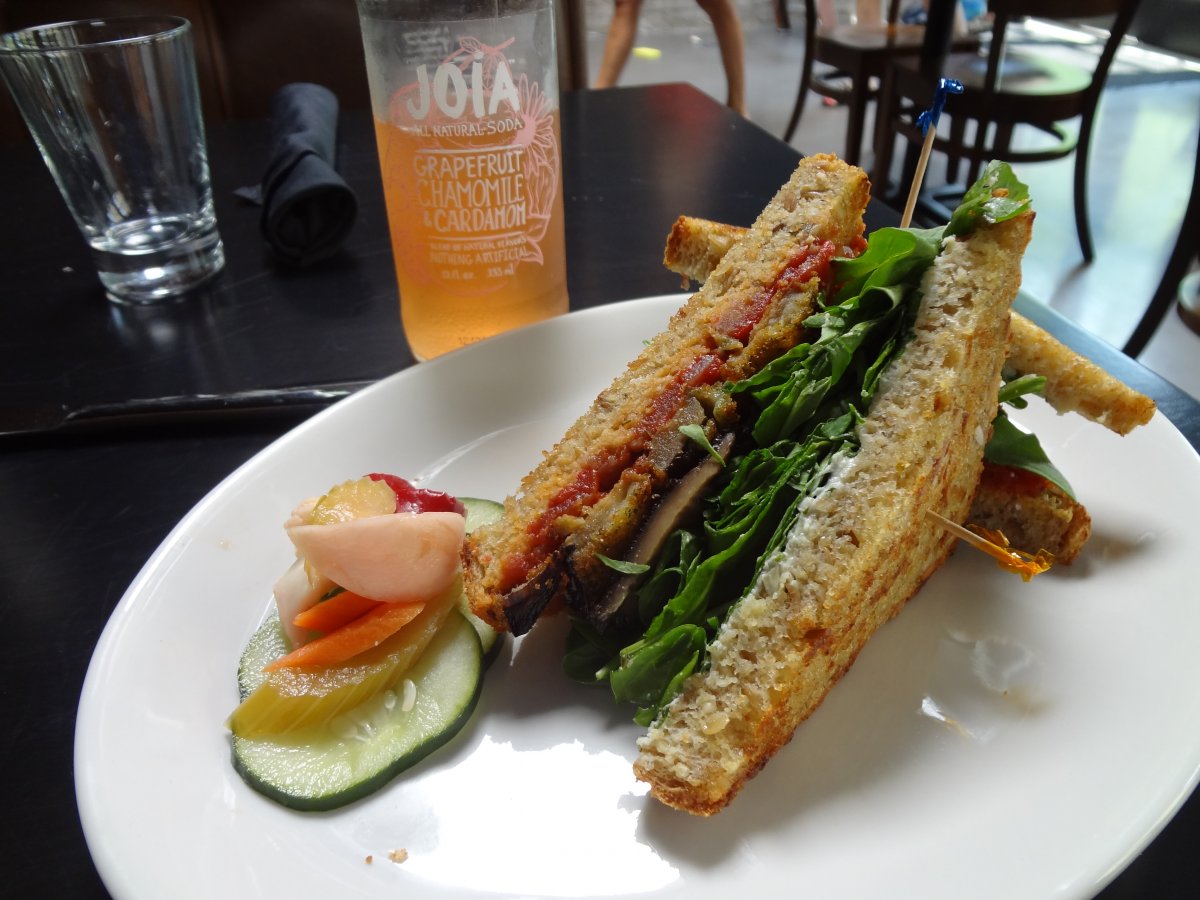 On a lunch visit, the sandwich options range from a hot dog with gardiniera relish ($4.50) to cured salmon and avocado ($9.50) and a pastrami rueben ($10.50. I was tempted by the pork belly banh mi ($10), but when my server explained that it included not only pork belly, but meatballs, and pate, I decided to choose something healthier – the crispy eggplant and mushroom sandwich ($8), which was served on toast with layers of roasted pepper, herbed cheese and greens – a very satisfying meatless combination. Other lunchtime options include salads, and a variety of sandwich spreads ($9).

There is live music almost every night of the week, with a cover that ranges from $2-$7. There is no cover for the Sunday “Revival” brunch, which also features live performers. The brunch menu offers mostly creative interpretations of traditional brunch fare, such as a duck brioche with sunny side duck egg and poblano gravy, a crispy pork biscuit with biscuit and sausage gravy (both $9.50), and an oyster and shrimp po boy ($13.50). I chose the pastrami and egg sandwich served on an onion roll ($6) — a delicious cholesterol extravaganza best eaten with a fork and knife.

There’s a good selection of craft beers on tap, with Minnesota breweries well-represented (Fulton, Surly, Summit, Brau Brothers.) I haven’t tried any of the specialty drinks ($9-$11), but they certainly sound creative — e.g., the butterfly kiss ($10) described as a “chamomile apricot lemon gin-tini with egg white-olive oil emulsion.” If $10 specialty drinks are a little rich for your blood, Icehouse also offers flavored shots for $5, like la samba, a cinnamon orange caipirinha; and year of the wolf, reposado tequila with a hint of agave nectar, citric acid, salt & spice. The happy hour, daily from 3-5 p.m. offers those shots, and the house wines for $3, and $2 off on tap beers and rail drinks.