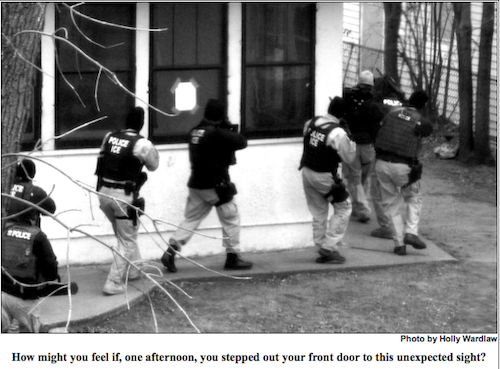 In January an ICE (U.S. Immigration and Customs Enforcement) contingent, identified by a vehicle plate as being from North Dakota, conducted a training raid at a county-owned vacant house on East Fourth Street in Dayton’s Bluff. Neighbors driving through didn’t know it was a practice, but thought it was an actual raid. That same day, a similar event occurred on East Conway Street. A second ‘raid’ occurred in February. A neighbor, witness to the January event, questioned a participant in the February event. This training group self-identified as being from Georgia. Neighbors began asking more questions of the City of St. Paul, Ramsey County, and ICE.

FULL DISCLOSURE: Sage Holben is a resident of the neighborhood. The first article (sidebar) was published in the Dayton’s Bluff Forum. Holben then wrote this article to provide more details for the TC Daily Planet.

Back story on the East Fourth Street neighborhood

This particular area of East Fourth Street is part of two city initiatives: Invest St. Paul and the Fourth Street Preservation Project of Historic St. Paul. Residents on Fourth Street, between Maria and Bates Avenues have experienced more than their fill of illegal activity and quality of life issues over the years. In September 2011, neighbors witnessed a fatal shooting at the intersection of Fourth and Bates. Several years ago, two women in separate incidents were attacked outside their homes; two residents were robbed at gunpoint in front of or near their homes, one in broad daylight. Residents have witnessed raids on drug houses; these same neighbors were active in closing the drug houses and those owned by negligent owners; residents have approached and moved visiting vehicles that had continued drug deals once houses had closed; they have stopped the semi-trucks that were detouring from the truck route, to complete prostitute/drug pick-ups at Fourth and Maria. Long-term renters and home owners work together in raising the quality of life for this lower Dayton’s Bluff neighborhood. With more vacant houses than residents on this block, the residents prove to be a small but mighty group.

As the city and area builders have begun rehabbing several of the area’s vacant houses, hope for more stability has surged. Hope has been expressed that some of the many immigrant families would choose to plant their roots here. This lower Dayton’s Bluff neighborhood is a pocket of diversity in income, education, and cultures. Besides white and African-American renters and owners this area is also home to a dense immigrant population of Karen, Latino, Hmong, and Somali families, many of whom have left war-torn countries to build new lives in safety and security. ICE trainings strike more fear into already vulnerable residents.

Initial contacts with the St. Paul Police Department, County Commissioner Rafael Ortega, and City Council President Kathy Lantry noted that that ICE aka “the Feds,” had not notified the County Sheriff, SPPD, County Commissioners, or residents in the area of the planned training. One source indicated that the Feds had informed the Eastside District just hours before the actual training. This contact appears to have been a simple statement and not following any communication protocol. Feds insisted they had sent out postcards notifying residents. No residents verified receiving notification in any form. Furthermore, if notification were actually to be done by postcard, renters would not know, as the cards would go to property owners and not renters/residents. On March 6, a Fourth Street resident presented the ICE activities to the City of St. Paul Human Rights and EEO Commission. The HREEO heard the plea from the struggling neighborhood and promised its support of a “cease and desist” demand to stop ICE trainings in residential areas of St. Paul.

On March 7, Ramsey County Homeland Security Director Judson Freed notified Sage Holben, East Fourth Street resident and Community Council board member, that the “county has stopped allowing the use of its property until and unless we can work out a process to guarantee that incidents like this don’t happen again.” Mr. Freed made very clear that the County made only a piece of property available. This was in no way county approval or sanctioning of ICE activity. Neighbors and the Community Council have been assured that Property Records and Revenue Department will stop allowing use of these properties until and unless a workable new process has been put into place.

In the meantime, Dayton’s Bluff Community Council, in conjunction with the City of St. Paul Human Rights Commission, is writing a letter to appropriate departments demanding a “cease and desist” of ICE trainings in residential areas.