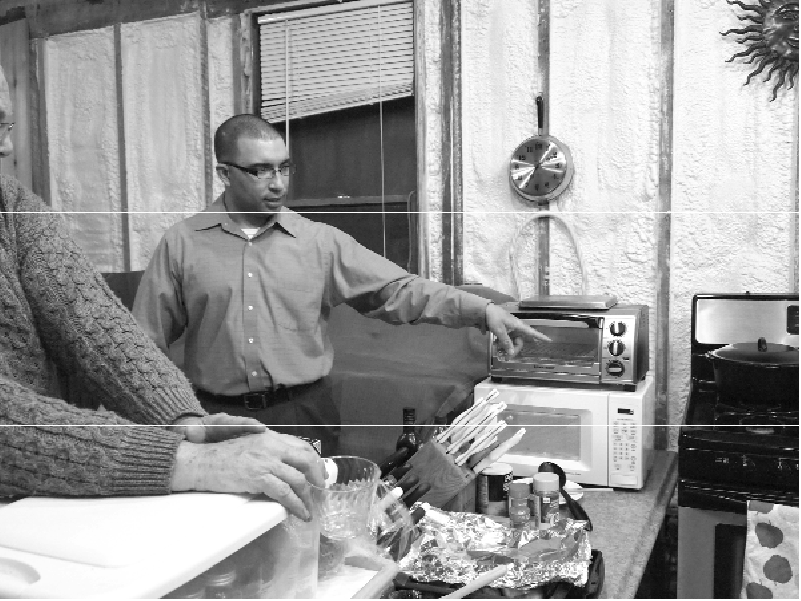 Ian Alexander hosted one of the regular Old Highland Neighborhood get-togethers at his home near North High School Saturday, Feb. 23. He’s in the process of renovating, and pointed out plans for the kitchen. (Photo by Margo Ashmore)

VoteforIan.com is the website, the man behind it, Ian Alexander, is running for the 5th Ward Council seat as incumbent Don Samuels chose to run for mayor rather than another council term.

(The other formally-announced candidate is Brett Buckner; coverage of his announcement was in the January 23 NorthNews, now online at MyNorthNews.com, under “news archive.”)

Alexander says business development and job creation are his priorities. On his website, he said, “Everyone agrees that one of the largest impediments to revitalization on the Northside is crime. But crime is often a symptom of something larger: the lack of economic opportunity.”

He told NorthNews, “The issue is we’re still losing population. Parents’ children reach school age and don’t qualify for the schools they want to send them to, they move. I have friends, African American professionals who’ve left the Northside, and that’s a problem.” Even though education is outside of the control of the city council, paying attention to economics can do a lot to improve the overall climate, Alexander said.

There will be meet-and-greets for the candidate Ian Alexander:

Alexander said he’s mostly been meeting with delegates preparing for the April 16 DFL endorsing convention and feels he has good support. “Most have been open to talking with me, I feel blessed,” he said.